Daily State Of The Markets: There Are Reasons To Stay Bullish Here

A month ago, the sky was falling. The technical divergences seen in the market were coming home to roost. Growth was slowing. Indicators were falling. Moving averages were snapping. There was fear in the air. And for the first time in a very long time, it looked like the bears might actually be awakening from an extra-long hibernation.

But after a quick dip of about -9 percent and a very exciting joyride to the upside of more than +11 percent (and counting), the tide appears to have turned. No longer is #GrowthSlowing a problem because this just means more QE money printing is to come – and these days, nobody really cares what color the currency is. And more QE, of course, means there is more money in the system that will be looking for a home in a stock or bond market near you. So, in short, it’s all good, right?

If you have detected a wee bit of sarcasm sprinkled into this morning market missive so far, give yourself a gold star. You see, it seems that the central bankers of the world are trying to print their way to global prosperity. And while saving the world from a global banking meltdown in 2008 was definitely a good idea, it seems that the central bankers haven’t figured out that they simply must step away from the printing press at some point.

Cynicism and sarcasm aside, investors need to take note that the current rally might just be for real. You see, nobody REALLY wants to put money to work here. Everybody is looking for a better entry point. And yet, Ms. Market has managed to fool everyone and just march merrily higher. Are we having fun yet?

But there are reasons to be positive here. At least 8 of them by my quick count. So, let’s run through a few of these and see how we feel at the end.

8 Reasons To Run With The Bulls

1. Big Declines in October Are a Good Thing. Of the 113 Octobers since 1900, there have been declines in the stock market of at least -5 percent or more 40 times. And what happened the rest of the year, you ask? Good things mostly. In the post-World War II era, during years in which there was a drop of -5 percent or more in October, the Dow Jones Industrial Average was higher in November and December 74 percent of the time. And according to Ned Davis Research, the median gain was +4.1 percent for the Nov-Dec period, which is significantly better than the +2.7 gain seen for all Nov-Dec periods.

2. 15 Days Above the 5-Day. The S&P 500 has closed above its 5-day moving average for fifteen consecutive days now. Our research shows that this suggests the bulls have earned the benefit of any doubt for a while.

3. An Impressive String of Higher Lows. While this streak actually ended on Tuesday, November 4, the S&P 500 had produced a “higher lows” (meaning that the today’s low was higher than yesterday’s low) each and every day for the prior 13 days. And although this is definitely a geeky thing to track, the analysts at NDR tell us that this has only happened 8 times before in the last 86 years. And the good news is that the market was higher a year later each and every time.

4. It Pays to Trust the Thrusts. There are three primary ways to measure stock market momentum: price indicators, breadth indicators and volume indicators. And one of the best ways to identify a healthy uptrend is for any (or all) of the indicators to experience a “thrust” signal. This tells investors there is significant “oomph” behind the move, which tends to persist going forward. The good news is that over the past 16 days, both price and breadth indicators have flashed “thrust” buy signals. When the breadth thrust indicator has been on a buy, the market has gained ground at a rate of nearly 23 percent per year. Similar +20 percent average annual gains are seen when the price thrust signal is on a “buy” as well.

So, it will suffice to say that a lot of good technical stuff has been happening in the last 16 days. 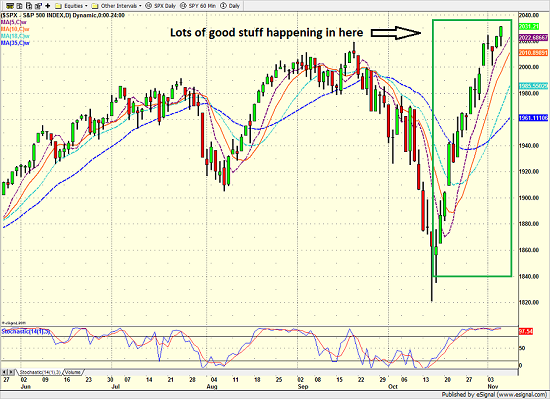 However as they say on T.V., but wait, there’s more.

5. The Environment Models are Strong. One of the best ways to manage the stock market is to first identify the market environment and then to use the appropriate strategy that works best for that environment. To implement such an approach, one first needs to have a method to identify whether the environment is positive, negative or neutral. In short, this is what a lot of fancy math and computer models are for. But the good news is that all 3 of our Environment Models are sporting green lights at the present time, with our daily model currently at the second highest reading of the year.

It is also worth noting that our Environment Models were Neutral before the big decline began in September. Thus, the models were basically saying that something was amiss.

6. Sentiment Is Not Extreme. History shows that when investor sentiment readings reach extreme levels, markets tend to reverse – in due time, of course, which is always the tricky part. So it is good news that many sentiment indicators are no worse than neutral right now. Remember, the Sept/Oct decline created a great deal of negative sentiment, which means that anyone who wanted to sell had likely done so. But now, with the S&P at new highs, sentiment is not overly positive yet. This means that there may still be a fair amount buying power left out there as those underinvested folks look to jump on the bull train.

7. #FOMO For a fund manager, underperforming is bad. For some it means their year-end bonus might be a tad light. For others it means no bonus at all. And for others still, it means their jobs might be on the line. As such, at this time of year – no, make that especially at this time of year – managers need to put whatever cash on hand to work as the fear of missing out becomes real. Thus, if Ms. Market continues to defy the odds and continue her march higher, those with severe cases of performance anxiety may have little choice but to bomb in with everything they’ve got.

8. Show Me The Money. It is said that money makes the world go ’round. And this is certainly true in the stock market. So, it is positive for anyone owning equities that fund inflows have been perked up of late. Again, if new money comes into a fund at this time of year, managers are not likely to let it accumulate. No, they are going to put that money to work, now.

So there you have it; 9 reasons to be bullish at this time. Nine reasons to be impatient when it comes to putting any cash to work. And 9 reasons why this rally just might keep on keepin’ on.

You just knew that was coming, right? We would be remiss if we failed to point out a few things. First, the market is very overbought (some might say “silly overbought”) at this time. Thus, no one would be surprised to see a pullback begin at any time and for any reason. Second, the trends have been one-way streets for many months now. Therefore today’s uptrend could become tomorrow’s downtrend at the drop of an algo. And third, the cycles suggest that things could get a little sloppy for the next 2-3 weeks.

In sum, a lot of very good things have been happening in the market since James Bullard started yammering on about what the Fed could do next and the Bank of Japan decided to print 24/7. However, the market has run an awfully long way in a short period of time. So… let’s all be sure to be careful out there.