When it comes to spotting danger periods for recessions, and especially major crashes, the Boom/Bust Cycle lets us see when stock crashes and recessions are most likely to occur. As my fourth key macroeconomic cycle, this makes it the most important one I have innovated since the Generational Spending Wave in 1988.

It explains why Ned Davis’ Decennial Cycle failed in 2010 – 2012, and why his cycle is more variable than clock-like. And right now it’s flashing a warning sign of extreme danger into 2019!

What gives this cycle an edge is that it’s based on sunspot activity, and scientists have measured this accurately since the mid-1700s. As such, they can now project it fairly accurately, as you can see for yourself in this first chart… 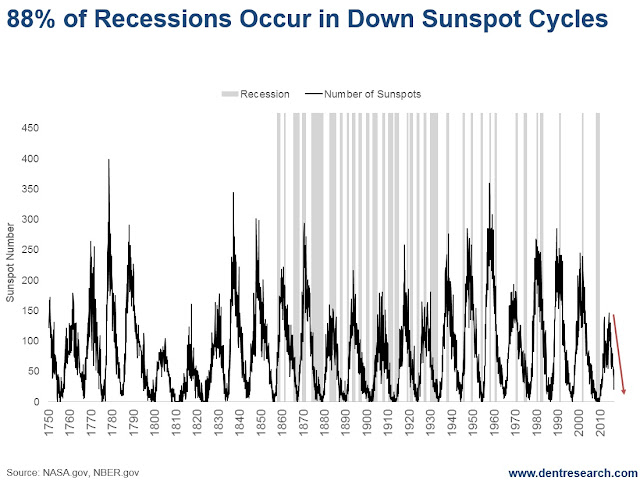 Dave Okenquist, my research analyst, found data on recessions back to 1850 and added the grey shadings to indicate these on the chart. That shows us that 88% of such recessions occurred in the downward leg of this Boom/Bust Sunspot Cycle.

That’s an astounding and irrefutable correlation!

Anyone who thinks this is too weird to pay attention to does so at their own expense.

In the last Boom/Bust Sunspot Cycle, we experienced the tech crash from right at the top in March 2000 into October 2002, exactly within the first three years of the downward trend – as Ned Davis’ cycle would have predicted.

Then we had the 2008/09 crash and great recession right into the cycle’s bottom in August of 2009. That’s not something Davis’ cycle would have predicted.

How’s that for a forecasting tool?

The most recent cycle was the most extreme in hundreds of years. It stretched out to 13.9 years instead of the average 10! It only peaked and began to turn down in February 2014, not the more typical early decade setback we’ve seen in the past since the 1960s.

Now, look at this table. It lists the major financial crashes, crises and depressions as they correlate with downturns in sunspot cycles all the way back to the early 1800s.

That’s 11 out of 11 major financial crises right over two decades – a 100% batting average!

So what does the current cycle say?

It tells us that the greatest danger zone is right ahead, from 2017 into early 2020!

Andy Pancholi of markettimingreport.com will be speaking at our IES conference on October 20-22. In addition to his near-term turning point models, he saw major connections with longer-term crashes, like the one we saw in 2008. He sees this happening again in 2017 and 2019. This adds weight to the warning that the worst is just ahead.

Central banks are fighting this tooth and nail and they may just succeed in delaying a crash a bit longer. But despite such extreme efforts, the markets have gone nowhere since late 2014, shortly after this Sunspot Cycle turned down. Passive investors would be silly to risk staying in this market.

The best scientists are my secret weapon here and they project that this Sunspot Cycle bottoms around late 2019/early 2020 (investors who still follow Ned Davis’ Decennial Cycle will likely continue to be way off track on this).

In short: all four of my powerful macroeconomic cycles point down together into early 2020.

The most critical demographic cycle doesn’t turn back up until late 2022 forward. But the Geopolitical Cycle and Boom/Bust Sunspot Cycle both turn up around early 2020. Each one represents the most comprehensive, but still simple, view of the dimensions that shape our economy over time, giving you a window into future years.

And what they’re all saying is that we’ll soon see the sale of a lifetime, when stocks, real estate, businesses, and even gold will be going for pennies on the dollar… and where those who understand what and why it’s happening can take advantage!