Costco  shares are up this morning after the warehouse wholesaler topped earnings estimates in the face of fuel price and foreign exchange headwinds. 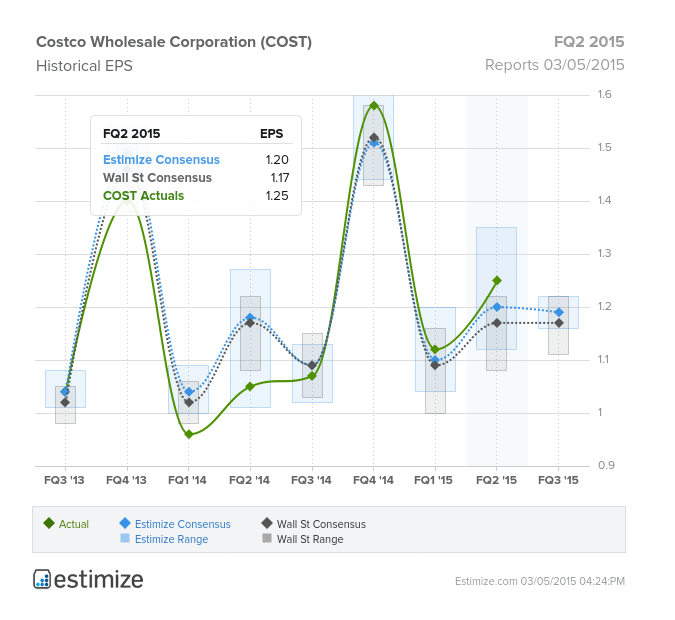 Costco’s earnings came in at $1.25 per share easily beating the estimates from Wall Street ($1.17) and Estimize ($1.20). According to Sterne Agnee analyst Charles Grom this was Costco’s largest earnings beat compared to the Wall Street consensus in 13 years.

Even though Costco had weak foreign currencies and the low price of oil working against it, a surge in same store sales and tax benefits lead to 19% profit growth compared to the same quarter of last year. Revenues came in slightly weaker than expected, but the market seems to be shaking that off.

In its press release Costco noted that the strong dollar and low fuel prices resulted in a 2% drop in international sales and limited domestic growth to 4%. Overall same store sales increased by 2%.

Excluding the negative impacts from the delating price of gasoline and the high cost of repatriating foreign currencies, comparable sales rose 8% both at home and abroad. After allowing adjustments for oil and currencies, this is a heck of a strong quarter from Costco.

Costco went on to release its February sales which too rose 8% ignoring the adverse effects of the price of gas and currencies. Those unfavorable conditions held monthly comparable sales to just a 1% gain.

The grand total effect of oil on Costco’s bottom line is nebulous to measure. On one hand Costco is among the leading sellers of fuel in the United States. On the other hand cheap gasoline means lower logistics expenses and more discretionary income in the hands of consumers. Cheap gas could mean lower revenue but higher profits. That’s something investors seem to have no problem with.

If Costco can maintain the pace of growth and see unfavorable conditions snap back to historical averages, the company could be in for a lift.