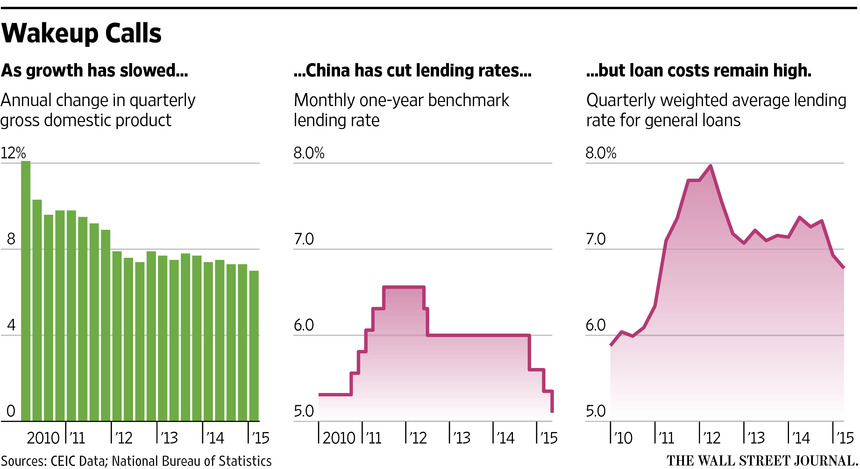 China has cut rates yet again.

The 3rd rate cut in 6 months (back to 2009 crisis lows) may seem like a desperate, last-ditch attempt to salvage a faltering economy to some – but not to our MSM talking heads – who see it as a bold policy initiative, well-timed to…  I don’t know, whatever BS they are spinning this morning to make MORE FREE MONEY sound like a legitimate strategy.

The last two rate cuts did nothing to stop the slide in GDP (it actually increased) but THIS rate cut will be different – I guess.  According to the WSJ, the move comes as senior Chinese officials are growing more fearful that the mountain of debt from the rapid expansion of credit over the past few years is weighing on efforts to pick up the world’s second-largest economy.

In one of the starkest official warnings about China’s growing debt woes, the PBOC said in its monetary-policy report Friday that the “rising debt size is forcing China to use a lot of resources in repaying and rolling over debt” while limiting the room for further fiscal expansion.  Meanwhile, easing measures taken by the central bank—including two interest-rate reductions since November—have largely failed to spur new-loan demand.

The chart on the left is measured in TRILLIONS of Dollars of debts that have more than doubled in the last 7 years after tripling in the 7 years before that.  Local Government Debt has been growing at a rate of 98% PER YEAR since 2007 – that’s new and dangerous – especially when you consider a city like Detroit, for example, is actually “only” $18Bn in debt.  The entire state of Illinois is “only” $127Bn in debt.  That means China’s problems are like having 50 Detroits or 10 states like Illinois in an economy half our size!

As you can see from this useful IMF chart, China’s issues are a rapidly slowing GDP that can’t support the debts taken on by housing, construction, rail and shipbuilders and manufacturers that were based on the assumption of continuing 7%+ growth.  While decreasing the lending rates helps a little, it doesn’t fix the underlying business and, in fact, it takes money out of the hands of consumers as they are forced to move their money from banks to the markets to stay ahead of inflation, which is still rolling along at a 5% rate.

Just like in the US and Europe, the secret sauce in China’s astounding stock rally has been forcing savers to become traders as the interest rates in Savings Banks and those paid on bonds tumble, forcing citizens to gamble their retirement accounts on equities.  This has increased the “demand” for equities and raised their prices considerably.  What could possibly go wrong?

We have some iShares FTSE/Xinhua China 25 Index (ETF) (NYSE ARCA:FXI) June $50 puts in our Short-Term Portfolio and we’ve been hoping for a chance to double down at $1 since 4/21.  I doubt we’ll go lower than $1.20 but it’s going to be tempting at that level as previous Monday pops in FXI have quickly corrected.

As to the rest of the World:  Greece is still not fixed (but hope springs eternal) and that’s knocking down the Euro, which is pushing the Dollar back over 95 this morning – first up day in more than a week.  Over in Japan, Sharp dropped 30% today as their troubles deepened and Toshiba fell 17% as they withdrew forecasts on an accounting probe.  None of this will be mentioned on CNBC, of course – where everything is AWESOME!!! In other AWESOME news: Smarphone sales in China are down 4.3%, Wholesale Sales in the US dropped 1.3% in March, the 8th consecutive month of declines while the Inventory to Sales Ratio hit 1.39%, the highest percentage since August of 2008.

Citi’s Matt King put out a report this week titled, “The Liquidity Paradox,” which points out that:

The investor base across markets has developed a greater tendency to crowd into the same trades, to be the same way round at the same time. This “herding” effect leads to markets which trend strongly, often with low day-to-day volatility, but are prone to air pockets, and ultimately to abrupt corrections.

Yes, I know it’s the exact same thing I’ve been warning about since we went to CASH!!! in late March – but it sounds so much smarter when a guy from Citibank says it, right?

Another thing that’s really bothering me is the way the MSM acts as if this earnings season is going well, when it really isn’t at all.  Revenues are clearly missing and the only reason earnings are coming in positively is because expectations were DOWNGRADED MASSIVELY over the past 3 months.  Beating downwardly revised expectations is no reason to rally the market to all-time highs, is it?

68% of the SPDR S&P 500 ETF Trust (NYSE ARCA:SPY) companies reporting (447 so far) have MISSED their revenue targets but 59% beat their earnings estimates due to a combination of very low expectations and very high levels of share buybacks (that reduce the number of shares the earnings are divided by).

In short, expectations were reduced by 8.2% and those expectations have been beat by 6.7% with a 3.4% decline in sales.  Overall, there are 1.4% less shares outstanding in the S&P 500 than there were on Dec 31st with companies already authorizing $600Bn in buybacks – almost as much as last year’s total and it’s only May 11th!

This market is not a price-discovery mechanism – it’s a shell game and they are going to keep moving those cards around trying to get you to place your bets.  Then, for some strange reason – the red queen won’t be where you think it was.