I think at this point with China, everything from here on out until whatever final resolution to the bubble era will be “unexpected.” That qualification has been overused almost everywhere during this global “recovery” that never was, the latest being China’s exports sinking in April as well as March. Analysts and economists were thinking about a tepid plus sign, expectations averaged +2.4%, but exports in US dollar terms fell yet again by 6.4%. Despite a 48% surge in February, total exports from China in Q1 only grew by 4.6%, meaning that April’s figure confirms a lot of the negative interpretations seen from other indications including the rather stark and dire PMI’s of late; the direction of trade in particular.

The danger of such a negative factor is how it relates to the rest of the world which has been forced from “boom” to “Q2 will be the rebound from transitory Q1 weakness” in only a few months. With China’s central role in the global supply chain, further and significant erosion in export activity already in April has begun to push back the expected arrival of that rebound:

“Imports have slowed on account of the housing slump and reduced demand for commodities, while exports have been softened on account of the uneven global recovery,” he said.
Economist Tony Nash of Delta Economics said there was clearly pressure on China’s trade environment.
“But the environment is improving and will continue through the second quarter,” he said. “We see some difficulties in the third quarter, with recovery late in the year.”

The danger to that optimistic forecast for later this year rides on the gargantuan US stock of inventory now piled up in retail and wholesale limbo. China’s negative export number in April is perhaps transmitting the first signals of that imbalance finally breaking into the wider economic structure. 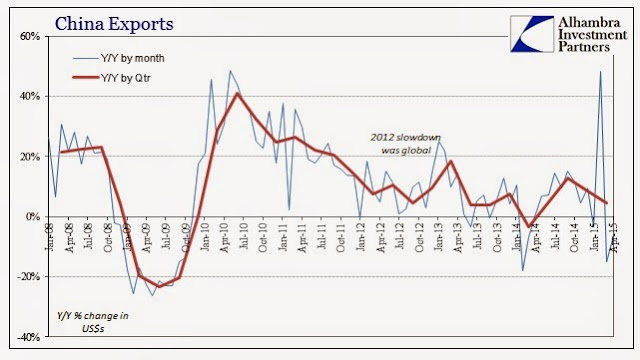 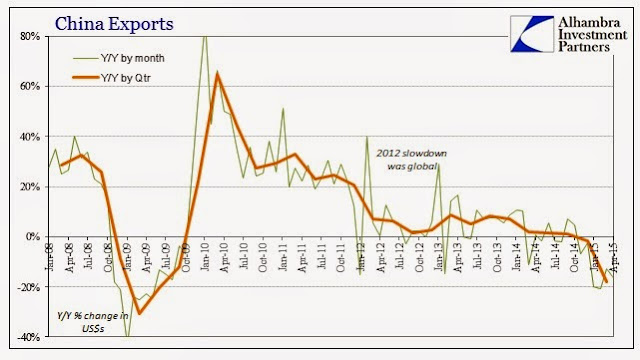 With an emerging world totally captured by both the “dollar” and China’s manufacturing state, the fact that China’s imports fell 16.4% in April after declining by 20%, 20.8% and 12.4% in January, February and March, respectively, is tantamount to the end of “transitory” global economic problems. While the import decline is being blamed as wholly a part of the domestic Chinese economy, it was the export sector that brought such imports in the first place. In other words, the sharp decline in imports is suggestive not just of a dramatically slowing Chinese economy but of the rest of the world through China’s manufacturing pivot.

“This is bad. I expect an interest rate cut this weekend,” said economist Tim Condon at ING in Singapore.
“This is going to make 7 percent (GDP) growth hard to attain. It looks like the weakness in the first quarter wasn’t transitory. It’s persistent.”

Mr. Condon got that rate cut, but such rate adjustments are not what they are taken to be. The PBOC is not trying to stimulate the economy (certainly having had absolutely no effect whatsoever to this point six months after the first one) only manage the state of the decline. As far as the rate adjustments go, the PBOC has been very clear that all it wants to see is a “neutral” monetary policy as it relates to changes in “inflation.” In short, as the economy falls off the PBOC is not adjusting monetary policy to restart the bubble surge but rather to ensure that monetary policy does not become overly “tight” as a matter of real interest rates.

At present, the domestic economy accelerated restructuring, fluctuations in external demand, China’s economy is still facing greater downward pressure. Meanwhile, the overall level of domestic prices remain low, real interest rates are still higher than the historical average for the continued appropriate use of interest rate instruments to provide space. In view of this, the People’s Bank of China decided as from May 11, 2015, loans and deposits of financial institutions lowered the benchmark interest rate by 0.25 percentage point, to create a neutral appropriate monetary and financial environment for economic structural adjustment and restructuring and upgrading.

The April PPI fell by almost 5%, which is an enormous decline further confirming that there is no economic momentum internally or, relevant to everyone else’s over-optimism, from overseas “demand.” Year-over-year, the CPI increased from 1.4% in March to 1.5% in April, but on a sequential, adjusted basis (which is what central banks and economists use) the CPI fell 0.3%. Therefore, in terms of the latest rate cut, real interest rates are only steady and are intended to address an orderly withdrawal (as much as possible) from the bubble era excesses; excesses that are, unfortunately, very difficult to suppress as they can break out almost anywhere:

“This asymmetric interest rate cut is meant to lower firms’ funding costs further while leaving the deposit rate not much changed with a view to keep it attractive enough so as to avoid large deposit outflows to the stock market,” Liu Li-Gang, an analyst at Australia & New Zealand Banking Group Ltd., said by e-mail. “This also shows that the PBOC intends to speed up interest rate liberalization.”

You still see it written almost everywhere, that Q1 and now maybe even Q2 will be further aberrations upon the “global growth” trend that assures so many economists’ forecasts. Yet, the difficulties in China that are proving stubborn, and the monetary policy that is also and unusually stubborn itself, more than suggest that “global growth” will not perform as any deus ex machina this year just as it did not last year. Global trade is the beating heart of the global economy (just ask the 1930’s) and the figures from China suggest there just is no “demand” anywhere despite trillions and trillions thrown at the world in search of so much “aggregate demand.”
Research Report
analyst ratings
blogger opinions
investor sentiment
news sentiment
analyst ratings
insider activity
hedge funds
stats charts
You May Also Like