No one knows exactly how much gold China has – but we know it’s a lot.

Last disclosed in April 2009, China gold reserves were at 1,054 tonnes. At least, that was the official number given…You see, China only reports its gold reserves every few years. The most recent number suggests the country upped its holdings 43%, adding 454 tonnes to the 600 tonnes the country claimed to have from 2003 to 2009. 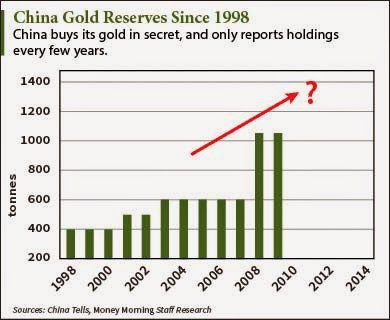 It is hard to believe China nearly doubled its gold reserves in just one year, between 2008 and 2009.

What’s more likely is the world’s biggest consumer of gold has been buying the yellow metal in secret for years.

Money Morning interviewed Jim Rickards, the Financial Threat and Asymmetric Warfare Advisor for both the Pentagon and the CIA, in August 2014.

According to Rickards, the numbers don’t lie – China is absolutely buying gold in secret.

“I recently ran into a senior officer of one of the major secure logistics firms in the world,” Rickards said. “The official said he recently brought gold into China at the head of an armored column of the People’s Liberation Army… I guarantee that did not show up in the official Hong Kong import figures.”

While we don’t know exactly how much gold China has, we do know one thing: it is accumulating more. UBS reported China imported as much as 1,500 tonnes in 2013 alone – nearly half of all the gold mined worldwide that year. And in 2007, China overtook South Africa to become the world’s largest gold producer. Gold output there is up 70% over the last ten years.

We also know that with enough gold, China could collapse the U.S. dollar.

China, Gold, and the Collapse of the U.S. Dollar

If China accumulates enough gold, it could replace the U.S. dollar as the world reserve currency.

If China were to convert a relatively modest part of its $4 trillion foreign exchange reserves into gold, the country’s currency could take on unexpected strength in today’s international financial system. It would be a gamble, of course, for China to use part of its reserves to buy enough gold bullion to displace the U.S. from its position as the world’s largest holder of monetary gold. (As of spring 2014, U.S. holdings amounted to $328 billion.) But the penalty for being wrong, in terms of lost interest and the cost of storage, would be modest.

“A lot of people speculate that they want to launch their own gold-backed reserve currency, to take the Chinese yuan, back it with gold, and make it a global reserve currency,” Rickards said.

Rickards went on to say if the amount that China owns were suddenly revealed, that unveiling in itself could trigger the collapse of the U.S. dollar.

China gold reserves are just one of the triggers that could collapse the U.S. dollar. Rickards has been warning for years that this was coming.

But he fears he and his colleagues’ warnings are being ignored by our political leaders and the Federal Reserve, and we’re on the verge of entering the darkest economic period in our nation’s history.