Labor unrest is on the rise in China, driven by its economic slowdown and rising expectations for wages and labor rights, and exacerbated by problems in both local governance and China’s social safety net.  Risks for businesses – both those with operations in China and those whose supply chains depend on Chinese manufacturing – are proving increasingly problematic.

Incidents of labor unrest in China are increasing.  According to the China Labor Bulletin (CLB), Chinese workers engaged in around 185 strikes in 2011.  In 2015, the CLB reported 2944 strikes – 16 times as many.  Better reporting and data collection may account for some of this growth – but even taking this into consideration, the increase in the frequency of labor protests is alarming. 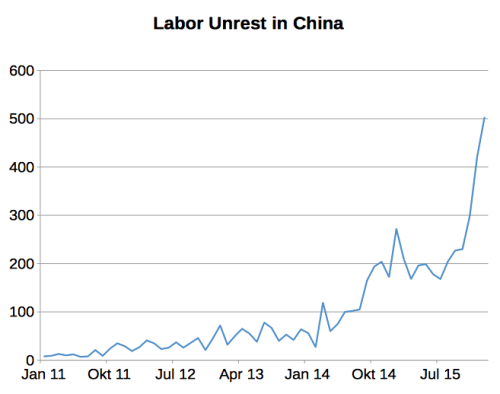 The challenge for China

What accounts for the ongoing increase in China’s labor unrest?  First, China’s ongoing economic slowdown is taking a toll on workers.  China’s growth has decelerated as it struggles to transition from a manufacturing and export-driven economy toward a service and consumption-driven one.  Many businesses – particularly in the manufacturing, construction, and mining industries – are facing tough times and are reducing wages, hours, and jobs.

This downshift comes as Chinese workers’ expectations for pay and labor rights are on the rise after decades of strong economic growth.  Laborers are insisting on better pay, hours, and working conditions as China’s standard of living continues to rise.

Furthermore, China’s welfare programs are chronically imbalanced, poorly implemented, fragmented, and mismanaged. This leaves many wage laborers desperate to hold onto their current jobs, and increases the chances of organized unrest in response to layoffs. Without a robust social safety net, the risks associated with labor conflicts will only continue to climb.

How will mounting unrest influence businesses and investors?

Labor unrest poses a direct threat to manufacturing and construction businesses operating within China.  Although disaffected laborers lack independent unions to help them coordinate, they are increasingly exploiting social media to organize protests. Some have even resorted to threatening mass suicide and holding executives hostage.

These strikes can lead to major costs for businesses; the Taiwanese shoemaking firm Yue Yuen lost as much as $27 million USD due to disrupted production and an additional $194 million due in concessions to workers as a result of strikes in Guangdong in 2014.

Strikes and protests can affect nearby businesses even if those businesses are not the intended targets of the protesters. Protesters often seek to blockade major roads, which can cause collateral damage for nearby factories and businesses.  There is also the risk of unrest escalating into violence that could damage local infrastructure and put personnel at risk, although China’s robust public security forces are generally effective at policing unrest.

Businesses should also be aware that their supply chains may render them vulnerable to unrest in China.  In 2010, for instance, strikes at parts manufacturing plants in China forced Toyota and Honda to shut down several of their auto-making factories elsewhere in the country.  Protests against Apple’s subcontractor Foxconn’s factories throughout 2010 and 2012 drew attention to Foxconn’s poor working conditions and generated reputational costs for Apple.

More broadly, more frequent and intense labor protests will result in more detention of labor activists and increase the chances of a protest escalating into a violent clash and crackdown.  Both of these contingencies present reputational risk for businesses operating in China.  Furthermore, a large-scale violent crackdown or a significant uptick in the detention of labor activists could lead Western states to impose sanctions, creating new challenges for businesses and investors with interests in China.

These risks will continue to prove problematic as labor unrest grows, particularly if China continues to struggle with its economic transition and fails to upgrade its social safety net for workers.

To mitigate these challenges, businesses should monitor trends and developments in labor conflicts closely, keeping up to date on the specific risks that could affect their operations or supply chains. In particular, businesses should be wary of relying too heavily on suppliers that chronically fail to comply with local labor regulations.

Global Markets in 2016: Four risks to watch out for