Can China Contain Its Market Bubble?

EconMatters- May 21, 2015, 6:55 AM EDT
SHARE ON:
Some people are getting very nervous about China, and as usual that stems from a misreading of the Chinese intentions. This is not to say that one should not be concerned at all, but it is much better to be concerned for the right reasons in order to find a more suitable line of inquiry and analysis. The complications of interpreting the Chinese reform agenda is again the upset in the variables, as most commentary continues to assume the baseline orthodox construal.
Mainline monetarism assumes that all monetary inflows and increases are desirable, a view is amplified when faced with economic stress and the potential for outright recession and dislocation. The current situation in China certainly qualifies under those terms, which is why the monetarist view is so confounded. They simply cannot fathom why the PBOC, or the communist government in general, would not immediately and forcefully undertake any and all “stimulus” means no matter the relative circumstances financially.
At issue right now is the revelation that China suffered the largest “outflows” in history in Q1, which, given the dollar/yuan system, amounts to a “tightening” of the “money supply.” Thus you get this kind of lead commentary:

Capital is flowing out of China at a record pace, sparking fears over financial stability and complicating efforts by the central bank to support a slowing economy with lower interest rates.
China ran a balance of payments deficit of $80bn in the first three months of the year, the largest quarterly net outflow on record, according to official data.

Anachronisms abound in that first sentence, especially the implied idea that the currency is driven by interest rate differentials. The wholesale finance system is affected by interest rates and relative returns, to be sure, but that sentiment is much more complex especially as it relates to funding costs and “dollar” availability. In other words, the idea that “capital” outflows are disassociated with the PBOC’s efforts to “support a slowing economy” mistakes the views on how an economy gains positive factors from financial ones. Monetarism relies on generic interpretations while the real world, especially the realm of wholesale finance, requires much more gradation.
Again, the orthodox idea is that all “money” is good, but the Chinese have made it abundantly clear to any unbiased observer that they no longer subscribe to generic ideas about it. To “support the economy” on their terms means making a sharp distinction between helpful and unhelpful financial flows and even methods; to make plain that there is some finance that is beneficial and vital, and some that is nothing but wasteful and harmful sources of dangerous bubbles. Reform in the PBOC means trying to distinguish the former from the latter, aiding the beneficial parts in targeted and conditional means while discouraging, carefully, any bubblish tendencies of raw speculation. 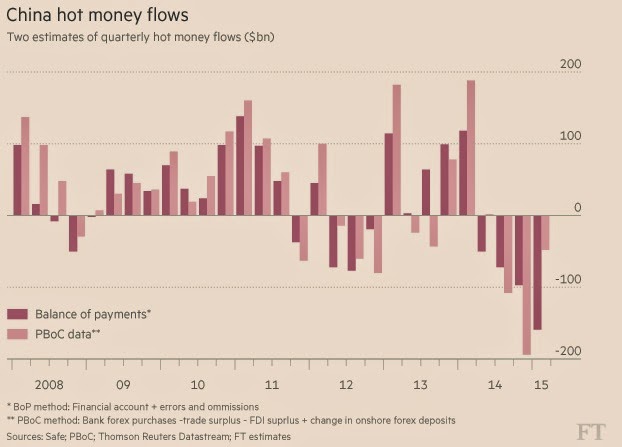 With that baseline view you can come to the realization that these “outflows” in Q1 were not just unsurprising, they are actually welcomed! That was the entire purpose of what the PBOC has been doing with regard to the yuan reference rate, to make the “dollar” speculations that much more uncertain and relatively expensive. I have referred to this before, where I believe the PBOC has concluded that it has a “dollar” problem, but one that cannot be so easily solved by traditional (orthodox) focus.
The Chinese need “dollars” for basic funding of its international trade factors, as nothing more than the consequence of its trading partners requiring “dollars” in payments. To which the Chinese have responded by increasing the degree of purely bilateral exchanges (bypassing the “dollar”) while simultaneously discouraging offshore “dollar” conduits in favor of mobilizing their reserves. In that manner, that can somewhat ensure that “dollar” financing goes to the “right” places, while the other unbridled pathways for speculation are partially blocked or diminished. It makes good sense from that perspective, as why not use those “dollars” (in the form of UST “reserves”) for something consistent with reform (a more pure market for money in China as the rest of the world would be a much better solution, as the PBOC is just trading one generic form of central planning and resource allocation for a more nuanced version, but the Fed has made that impossible including how the eurodollar system continues to decay). 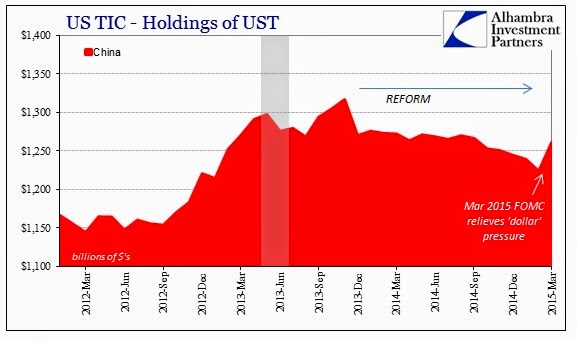 And I think that is what they have done, which creates the impression of the Chinese “selling” UST’s while “capital” outflows abound. In operational terms, Chinese banks, which is where the aggregate short “dollar” position resides, used to finance “dollar” loans to the import sector through the offshore eurodollar market but now can instead obtain a greater proportion of “dollar” funding directly from the PBOC’s “reserves” stockpile. That would have the accounting effect of an “outflow” where Chinese banks no longer have to roll over continued eurodollar financing.
From the wholesale finance perspective, the currency looks much different than how it is described under 20th century thinking. And that is echoed into the interpretations about how the Chinese are intending upon future operation.

Nevertheless, capital outflows are complicating efforts by the People’s Bank of China to support the economy through monetary easing. For the past decade, central bank purchases of foreign exchange inflows were the main source of base money creation in China’s banking system. Now, with outflows threatening to shrink the money supply, the central bank is turning to new mechanisms to expand it.

Nope. The PBOC intends to “shrink the money supply” where the “dollar” is involved – that was the very purpose of allowing market forces to act upon the yuan in the early part of 2014 (after experimenting with the “dollar” market reaction to managed defaults). They are supporting their economy how they see it more realistically by recognizing their bubbles and how their bubbles became bubbles. If there is any nervousness or concern, it relates not to “capital outflows” but whether any central bank can manage a controlled descent or decline without the whole thing devolving into open disorder and chaos.
Can a bubble be slowly and carefully deflated without it simply blowing up? It should be abundantly plain by now that the PBOC means to take economic growth as a cost to the endeavor. As shown above, they have already let some air out, which includes economic slowing, but the greater part of the story is still to be written.
Research Report
analyst ratings
blogger opinions
investor sentiment
news sentiment
analyst ratings
insider activity
hedge funds
stats charts
You May Also Like