Buy the Rumor, Sell the News

The old investing adage “Buy the rumor, sell the news” comes to mind following the “Trump Rally” to end 2016. As we all know, President-Elect Trump has not yet been sworn into office and yet, the year-end climb in US markets has been mostly attributed to his policy proposals. This makes sense as the market is always forward-looking, but it is important to keep in mind that it often overshoots in the near term.

Any market participant would tell you that this conservative/high income sector should suffer from an increase in interest rates- and it did. Yet, all all of the underperformance came before the actual event (Fed rate hike) and subsequently, Utilities dramatically outperformed (short-term). 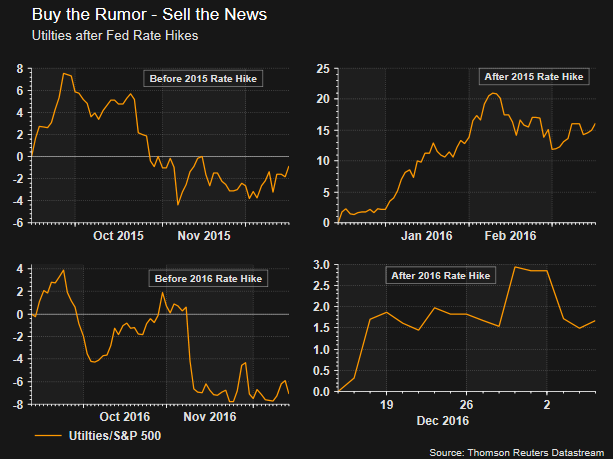 The surprise victory of Donald Trump in the Presidential election brought about a dramatic market rotation that benefited cyclical sectors like Financials and Industrials. Cyclical sectors outperformed due to the widespread belief that Trump’s pro-business policies could boost domestic economic growth. 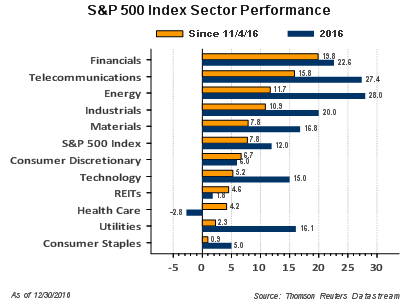 This rotation may prove to be wise and Trump’s policies may boost the U.S. economy, but in the near term, we would not be surprised to see some of this rotation temporarily undone. The market has been driven higher by policy speculation; actual legislation may prove the wisdom of “Buy the rumor, sell the news.”