James Cordier- May 18, 2015, 5:31 AM EDT
SHARE ON:
If the fight between crude oil bulls and bears is reaching a conclusion, it’s likely to be a split decision.

Oil prices are back in the spotlight and everybody has an opinion – with some of the biggest names in the investment world coming down on both sides.

Like everyone else, I have mine (which I gladly shared on Fox Business this week, my fellow analyst aghast that I dare counter a Goldman forecast).

Goldman and the other bears may eventually be right. Prices may indeed level off or even fall later this year. But they may be trying to turn the music off on a party that is just hitting its stride. Lets examine what is driving crude prices now.

A big focus of many oil bulls has been the falling Rig Counts in the US. To be sure, US rig counts have fallen drastically. There are only 84 rigs now operating on North Dakota’s Bakken Shale vs. 209 in early 2012. Nationally, the count is down to 679 from 1,527 just last year. Yet crude production levels have not yet fallen significantly. We cannot then, directly attribute the rise in crude prices simply to falling rig counts.

Something else is going on.

It appears that expectations are finally becoming reality.

This is NOT due to lower production but to Refineries RAMPING UP Production, thereby using up crude supplies at a faster rate.

Refinery profit margins are soaring – giving them incentive to ramp up production NOW to make more profits while it lasts. And ramp up they are. As of May 1, US refinery operating rates stood at 93%. This vs. 90.1% at the beginning of April and 87.8% at the beginning of March.

But higher profit margins don’t tell the whole story. There is another reason refineries are using up crude at a faster clip.

Crude oil demand has a very cyclical nature to it. The summer “driving season” kicks in about June. Good weather brings vacationers and more overall traffic the roads, driving up demand for gasoline. Distributors prepare for this phenomenon in advance by building up gasoline stockpiles in the Spring. This increase in wholesale demand means refineries increase output during these time periods.

Thus the combination of high refinery profit margin and increased wholesale gasoline demand are driving up refinery operating rates. This is expected to begin to draw down crude stockpiles. 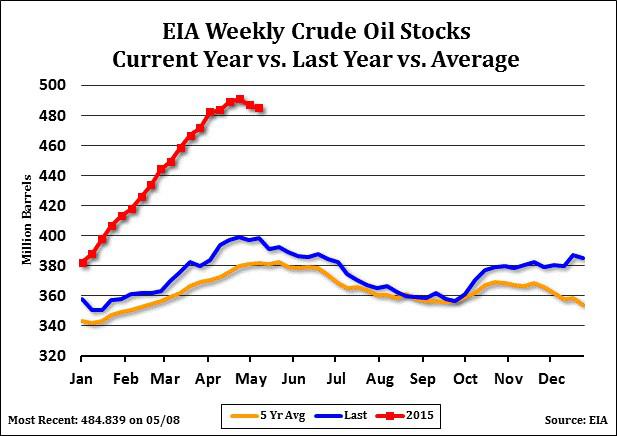 Crude Oil Storage levels typically begin to decline in May. 2015 sees May stockpiles at record highs.

The seasonal chart below indicates that in past years, expected seasonal demand followed by actual draws on crude stocks has tended to have a bullish impact on prices – often deep into summertime. While there is no guarantee prices will trade higher this year, we have every reason to believe crude stocks will begin a gradual decline this month.

While past performance is not indicative of future results, in past years, oil prices have tended to gain strength into US summer driving season.

We do not see crude oil at the beginning of a bull move but rather in the middle of one. As the public begins to see draws in crude stocks, it could create another leg higher into the summer months. The trend higher was started by traders fueled by expectations. It could be continued by the public as they watch those expectations come to pass.

Our price projection is to see crude prices at or above $70 by July.

With seasonal demand in full swing, refinery operating rates spiking and a strong seasonal tendency for firmer prices, it is our opinion that crude oil prices will strengthen into mid-summer.

While we advise our clients to use an option writing approach to this market, futures traders can look to buy any breaks back below $60. 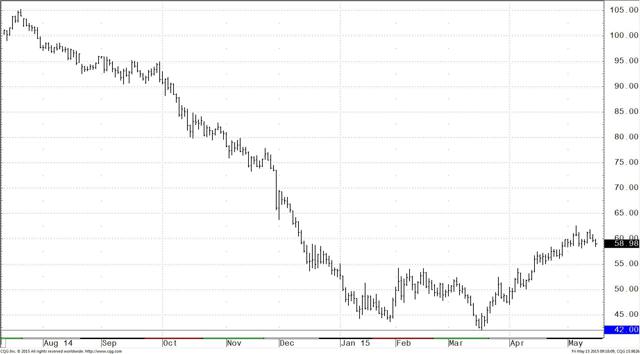 Should crude rally above $70 this summer, it could set up some shorting opportunities into the Fall. But that is a subject for another article.

Until then, pullbacks should be buying opportunities.