The collapse in oil and gas prices over the past two years had a severe and potentially long-lasting impact on how investors view oil and gas MLPs.

It is likely many investors simply refuse to invest in MLPs. Perhaps the best way to sum up how many investors view these MLPs right now is with the phrase, “once bitten, twice shy.”

Investors certainly cannot be blamed for taking a reluctant approach to MLPs. Over the past two years, many MLPs have had to cut or suspend their distributions. Several of them even went bankrupt.

But there are still well-run MLPs that did not cut their distributions, even at sub-$30 oil. One of them is Buckeye Partners, L.P. (NYSE:BPL).

Buckeye Partners is a Dividend Achiever. It has increased its distribution for more than 20 consecutive years.

Buckeye Partners has a 7.4% yield, and has historically had a very high distribution yield. 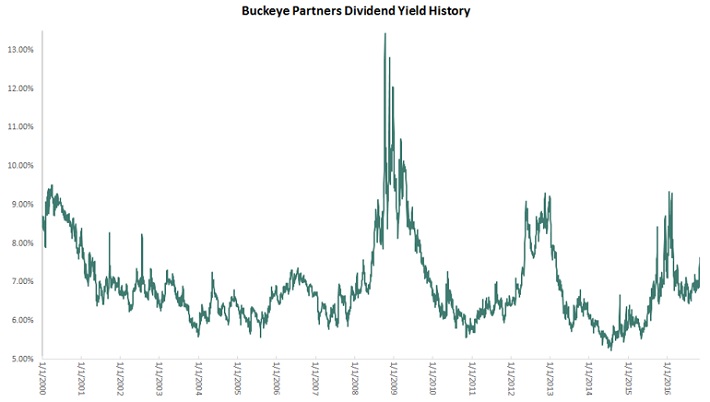 And, it has continued to raise its distribution, even during one of the worst periods for the oil and gas industry in decades.

This article will discuss Buckeye Partners’ business model and its future prospects:

Buckeye Partners’ history as a company stretches all the way back in 1886, when The Buckeye Pipe Line Company was incorporated as a subsidiary of Standard Oil. After Standard Oil was broken up in 1911, Buckeye became an independent publicly owned company.

Buckeye Partners is a midstream energy company. It owns and operates transportation and storage assets such as pipelines and terminals.

It is geographically diversified across the U.S. 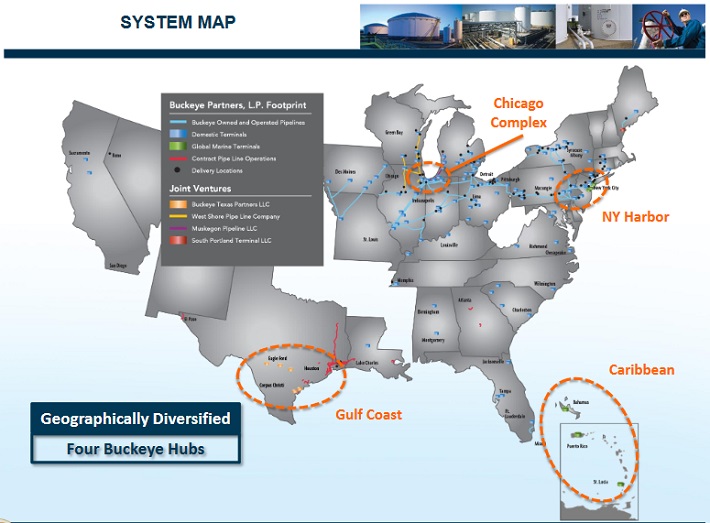 The company’s extensive network of assets includes 6,000 miles of pipelines, as well as more than 120 terminals with storage capacity of over 115 million barrels of oil equivalents.

It operates in the following segments:

Business conditions remain challenging for Buckeye Partners, because of the steep drop in oil prices over the past two years. But as a midstream operator, the company is not as vulnerable to volatility in commodity prices as the upstream MLPs.

Approximately 95% of the company’s adjusted EBITDA over the past 12 months was fee-based. This means Buckeye Partners basically operates like a toll road.

It collects fees on volumes, and as a result the company’s financial performance is reliant more on volumes than on the underlying commodity price.

This is how the company is still able to grow, even with low oil prices. Over the first three quarters of 2016, Buckeye Partners increased adjusted EBITDA from continuing operations by 30%.

This is a challenging environment for U.S. oil MLPs, but Buckeye Partners has a two-pronged plan for growth.

First, it will grow through organic investment. The company invested over $300 million in growth capital expenditures in 2016.

In addition, there are growth opportunities available in international regions. The company has pursued this through acquisitions.

Buckeye Partners has invested $7 billion in acquisitions since 2010.

VTTI is based in the Netherlands. It operates in 12 countries on five continents. 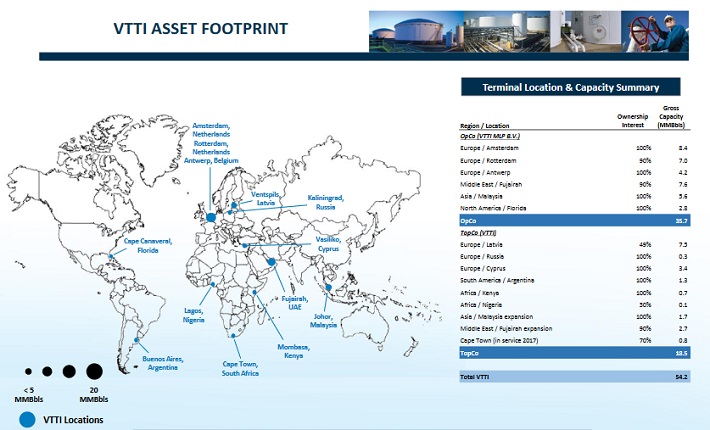 The deal is attractive for Buckeye Partners because VTTI has a presence in high-growth markets, such as Singapore and the Middle East, where demand growth is accelerating.

VTTI’s assets are entirely fee-based, which limits exposure to commodity pricing. It has averaged 97% utilization over the past four years, which indicates the stability of the company’s cash flow.

Investors saw first-hand the dangers of the MLP business model, which relies heavily on debt financing and can be extremely vulnerable to falling commodity prices.

It has done this by achieving a conservatively-capitalized balance sheet. The company had no debt maturities in 2016, and has only $125 million of debt maturing in 2017. 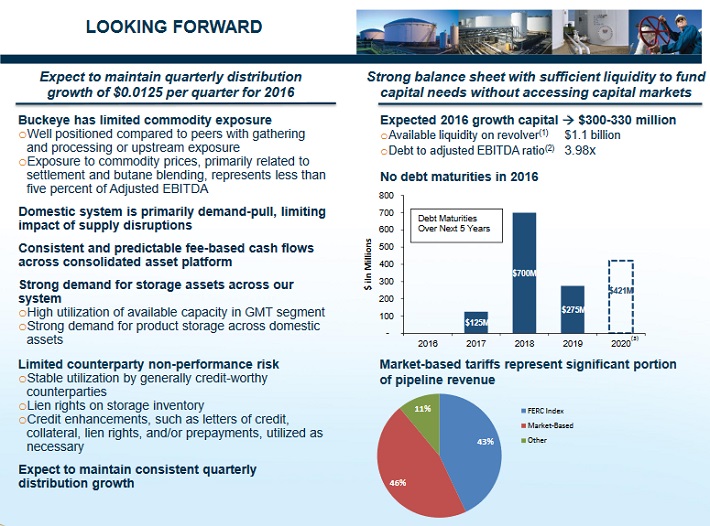 Buckeye Partners’ sound debt metrics enable the company critical access to the capital markets, which is necessary for MLPs to fund growth capital expenditures. To that end, the company has $1.1 billion of available financing in its credit revolver.

In the past four quarters, Buckeye Partners has maintained a distribution coverage ratio of 1.16. This means it generated 16% more cash flow than it needs to sustain its current distribution.

Cost cuts have helped secure the distribution. Over the first three quarters of 2016, Buckeye Partners cut capital expenditures by 12%.

Going forward, the distribution will represent a significant portion of total returns.

The company has consistently grown EBITDA and cash flow over the past several years, which has fueled its impressive distribution growth.

And, since the company maintains a solid balance sheet, the current distribution appears secure. 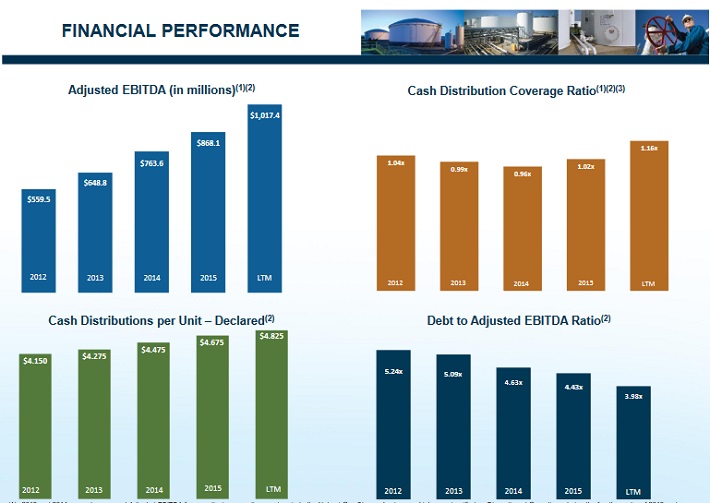 A reasonable projection of future returns is as follows:

The distribution will make up a significant portion of total returns, which is not surprising. MLPs have historically been relied upon by income investors, for their high yields.

Investors might be reluctant to dip their toes into oil MLPs, given what has transpired over the past two years.

That being said, Buckeye Partners remains a well-run company with a solid business model. Only 5% of its annual EBITDA is exposed to commodity prices.

As a result, for investors willing to consider MLPs, Buckeye Partners is a strong choice for income.

VivoPower International (VVPR): What the Hell Has Happened