This is a natural connection to make, since the vast majority of MLPs operate in oil and gas.

Brookfield Renewable Partners LP (NYSE:BEP) is an MLP, but it operates in renewable energy.

It has a hefty 6% dividend yield, and has raised its distribution four years in a row.

With another six years, it will become a member of the Dividend Achievers, a group of 271 stocks with 10+ years of consecutive dividend increases.

Brookfield could very well get there. The company has a stated target of 5% to 9% annual dividend growth going forward.

This article will discuss why Brookfield shares could be attractive for diversification within the energy sector, as well as its high 6% yield.

Its assets are focused on the following technologies:

Approximately two-thirds of Brookfield’s assets are in North America, with the remainder spread among Europe, Brazil, and Colombia.

In all, the company has $25 billion of renewable assets in its portfolio, consisting of more than 10,000 megawatts of installed capacity.

The renewable energy industry has made significant progress in recent years.

Costs across the industry are coming down, and demand continues to rise. This has given companies like Brookfield the ability to scale up and expand.

Brookfield has a high-quality portfolio, with stable cash flow. Approximately 90% of Brookfield’s 2017 capacity is contracted.

And, the cash flow generated by Brookfield’s projects is not reliant on subsidies.

There are many reasons to like Brookfield’s focus on hydroelectric power.

Carbon-producing energy sources like coal have fallen out of favor. On the other hand, hydroelectric power is a renewable form of energy, which does not produce carbon. 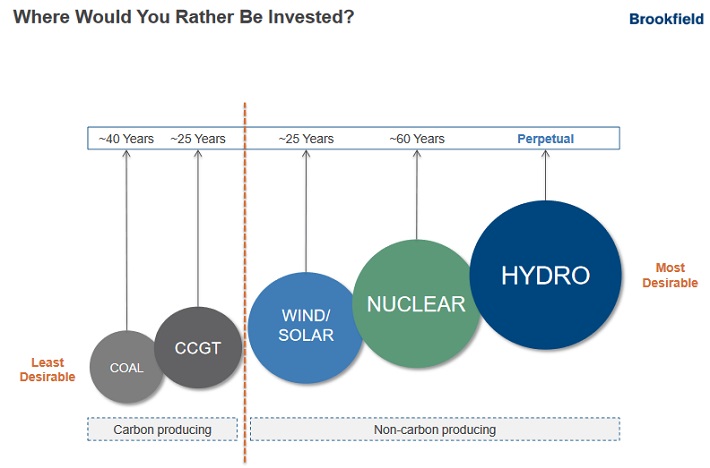 Meanwhile, the economics of hydroelectric power are attractive. Water is a scarce and irreplaceable asset.

Hydroelectric generation produces satisfactory margins, thanks to high barriers to entry and long-term contracts with customers.

Even among renewables, it generates higher returns with less risk than wind and solar, which are still highly reliant on subsidies. 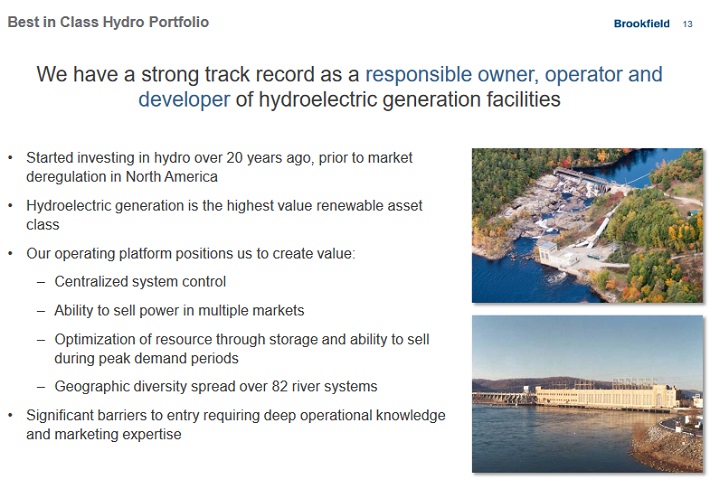 For these reasons, Brookfield considers hydroelectric generation to be the highest-value asset class across the entire renewables spectrum.

This is a promising indication that these renewable projects are economically viable. In turn, they can now generate enough cash flow to sustain dividend payments.

Capacity continues to rise, driven by demand for renewable forms of energy. Brookfield management attributes this growth to climate change. 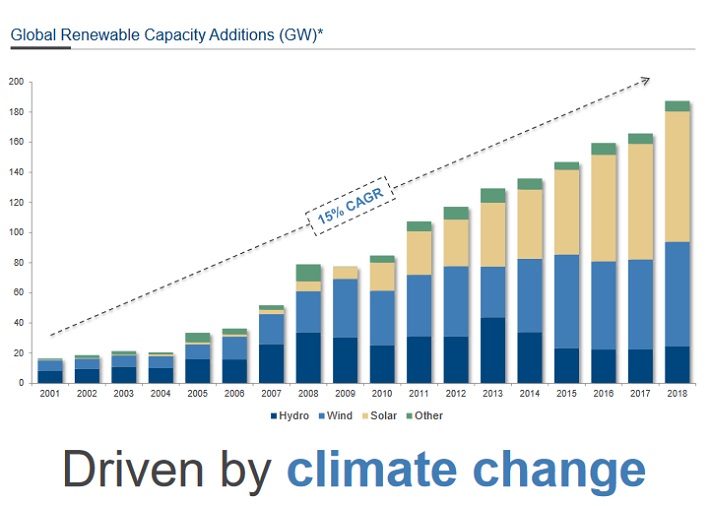 Global renewable capacity additions have grown at a 15% compound annual rate since 2001.

This sets up a promising tailwind for the renewable industry—and Brookfield specifically—going forward.

Brookfield grows its portfolio through organic investment, as well as M&A.

First, Brookfield has an internal project pipeline of 6,800 megawatts of capacity. 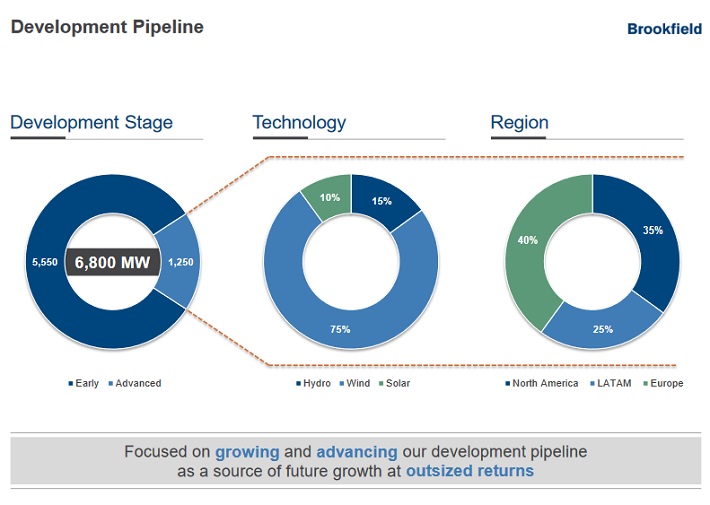 The company expects to deliver around 200 megawatts from its backlog each year.

In addition, Brookfield supplements its organic growth with acquisitions. In the past decade, Brookfield acquired acquired over 6,000 megawatts of hydro and wind power capacity.

A recent example was Brookfield’s $500 million acquisition of a 51% interest in TerraForm Power (TERP). This deal adds approximately 3,600 megawatts of capacity to Brookfield’s portfolio.

FFO measures the cash flow generated by the underlying operations of the business. The company bases its dividend payments, in part, based on FFO.

As an owner and operator of renewable energy projects, management believes certain items would skew earnings-per-share, such as depreciation.

Growth was due mostly to capacity additions. For example, generation capacity increased 2.1% in North America for the year.

Along with its fourth-quarter earnings report, Brookfield raised its dividend by 5%.

Brookfield maintains a dividend policy, which is to distribution approximately 70% of annual FFO.

Still, management is highly confident in the company’s growth potential.

Due to the positive current market environment, and future growth expectations, Brookfield has set a target of 5%-9% annual distribution growth. 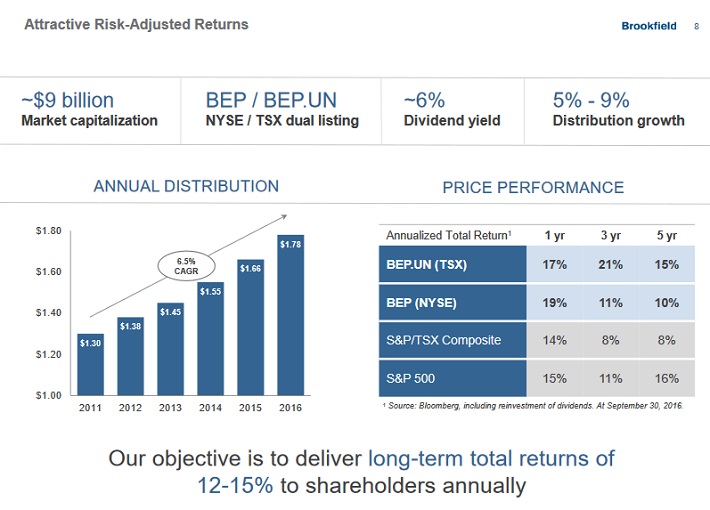 Over the long term, Brookfield seeks to generate 12%-15% annual returns to shareholders.

A major consideration for investors thinking about buying MLPs is debt. Over-leveraged balance sheets sunk the many oil and gas MLPs that went bankrupt over the past year.

Brookfield carries a significant amount of leverage–$10.2 billion in long-term debt to be exact. This represented a long-term-debt-to-EBITDA ratio of approximately 6.8, which is high for an MLP.

That said, its credit metrics are satisfactory. It maintains a ‘BBB’ investment-grade credit rating from Standard & Poor’s.

And, 90% of its debt is fixed-rate, with an average duration of eight years. This should help blunt the impact of higher interest rates, if the Fed hikes rates in 2017.

Investors should keep close watch on Brookfield’s balance sheet once interest rates are on the rise again.

But for now, the company generates enough cash flow to sustain its dividend growth forecast.

The combination of a 6% current yield and high single-digit dividend growth each year is an attractive scenario for income investors.

Brookfield could be a good way to gain diversification into renewables, as a complement to the traditional oil and gas MLPs.