About the Author Lars Christensen

Lars Christensen (born 1971) is Chief Analyst, Head of Emerging Markets Research and Cross Asset Allocation at Danske Bank. Earlier (until January 2001) Lars Christensen worked as an economic policy analyst at Danish Ministry of Economic Affairs. Lars Christensen has a master degree in Economics from the University of Copenhagen (1994). Twitter: @MaMoMVPY Lars Christensen is the author of the book “Milton Friedman – en pragmatisk revolutionær” (“Milton Friedman – a pragmatic revolutionary”) published in November 2002. He has contributed to numerous other books. Lars is widely quoted by most international financials media – Financial Times, The Telegraph Bloomberg, Reuters, Dow Jones Newswire etc. In 2006 Lars co-authored the report “Geyser Crisis”, which forecasted a major economic crisis in Iceland. As head EM research at Danske Bank Lars has long experience with analysis the Central and Eastern European economics. He is well known in the region among both the wider public and among policy makers – particularly in Poland and the Baltic States. Finally    Lars also blogs at marketmonetarist.com. His blog The Market Monetarist has since it was started in 2011 become one of the leading international blogs on monetary policy. Lars has coined the name Market Monetarism. Market Monetarism is a new school of economic thought that has emerged primarily in the blogosphere. Market Monetarists like Lars advocate that central banks should target the nominal GDP level (NGDP level targeting). Lars Christensen is also a Senior Fellow at the Adam Smith Institute. Lars is the founder of the Global Monetary Policy Network – an informal network of individuals with interest in monetary policy issues.

Brexit is Not a Major Global Shock

It rarely happens, but sometimes Scott Sumner and I disagree and that is the case presently.

Scott sees Brexit as a major negative global shock, while I think that Brexit on its own is not really a big deal.

The paradox is that going into the latest political and market events Scott has actually been rather relaxed about both the global economy and the US economy, while I have been a lot more worried.

I have been worried that premature monetary tightening could send the US economy into recession and could blow the ‘dollar block’ up and in the process cause a major Chinese crisis and at the same time I have in the latest couple of months also started to worry that slowing nominal GDP growth in the euro zone could cause another ‘euro spasm’.

I very much worry about these issues and therefore I am hardly think that the Brexit vote is doing much to help things and I personally am deeply worried and frustrated that this might to a very large extent be yet another example of increased nationalism and anti-immigrant populism across Europe, the UK and the US.

But Brexit in my view is just yet another factor that could further deepen the crisis – and I have discussed the mechanics of it in my previous post – but on its own I don’t think this is a major negative shock to the global economy. It can develop into a very bad shock if monetary policy once again fails, but from what we have seen so far in the financial markets the shock is not particularly big.

Let me try to illustrate it by looking at a couple of markets. Lets start out with the dollar. This is weekly changes in EUR/USD since the beginning of 2015.

The Brexit ‘shock’ is the very last down move in EUR/USD (a stronger dollar). This is consistent with what we would normally seen when we have a spike in risk aversion in the markets – the dollar as the main reserve currency of the world strengthens.

Hence, we see the dollar has strengthened over the past week, but it is barely more than one standard deviation (from 2008 until today) and there has been numerous weekly moves in the dollar just since 2015 that have been significantly larger particularly during 2015.

The story is more or less the same if we look at the global stock markets. This is weekly changes in the MSCI World Index of global stocks. 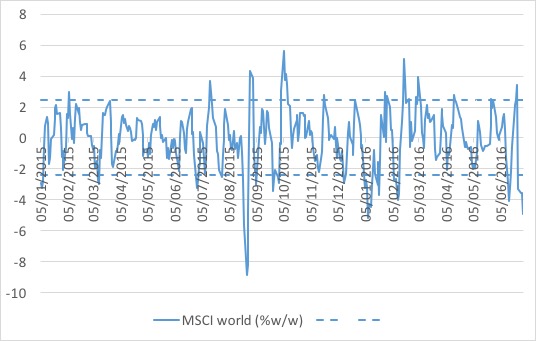 This is of course only two examples, but there are other s- for example the implied volatility in the US stock market (VIX) or the change in inflation expectations (they are down in the US and the euro zone, but not a lot and actually up in the UK and Japan).

Of course Brexit matters, but there are a lot more important things that should worry us more

My point is not that Brexit does not matter. It certainly does in all kinds of ways and it could end up being a horrible thing, but it might also – in a dream scenario – end up being a positive thing (the EU establishment will understand the message and reform and UK might not turn crazy anti-immigrant).

The markets are assessing these risks and judging from that the global financial markets are telling us that Brexit in itself is not a major negative event for the global economy and even though I am sad to see the UK (potentially) leave the EU I would agree with the market – Brexit is not the end of the world.

That, however, does not mean that I am particularly optimistic about the global economy at the moment. Hence, I continue to think that the Fed has been way too aggressive in terms of rate hikes and I fear that the Fed does still not understand that there is a significant risk of an US recession in the near future (even disregarding any effects from Brexit) and similarly and I am deeply concerned that we soon could have another “euro spasm” as a consequence of slowing nominal GDP growth and finally it is far too early to say that things are all well in China.

On a positive note Brexit might be the “excuse” both the ECB and the Federal Reserve need to reverse course and in the case of Fed cut rates rather than hiking.

In fact this is what the markets already are pricing in. And that should be remembered – because that is now the benchmark by which we should judge the Fed. Hence, if Yellen does not soon spell out that rates are more likely to be cut than being hiked then the risk of more market turmoil clearly increases.

Hence, maybe the real story is not whether Boris Johnson will become British Prime Minister or whether Jean-Claude Juncker learns to behave himself, but rather the question is whether the ECB and the Fed finally will get their act together and ensure a re-anchoring of inflation expectations. I am not too optimistic on that part.