BP plc (ADR) (NYSE:BP) is a global oil and gas producer. It operates as an “integrated” company, meaning it has an upstream and downstream segment. Upstream activities include exploration and production of oil and gas. Downstream includes refining.

The best aspect of operating an integrated model is that it provides balance to the organization. That is because refining profits tend to rise when oil prices decline.

With oil prices down by roughly half since their 2014 peak levels, exploration and production activities have taken a severe hit. BP lost $6.5 billion last year. The results would have been much worse, if not for its diversified business model.

In 2015, BP earned $7.5 billion in downstream profits. BP has a large refining unit. 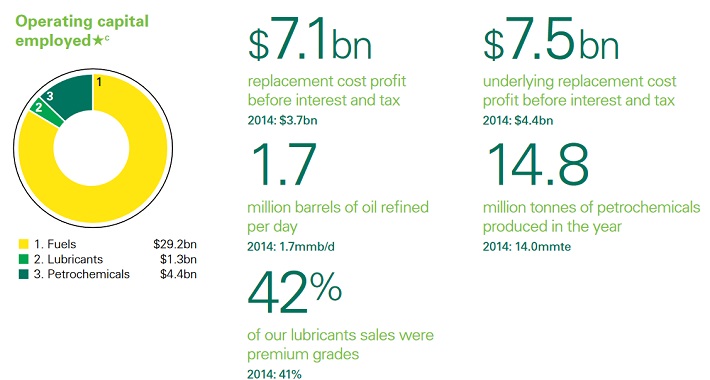 Downstream profits last year set a record, and helped offset a significant loss on the upstream side of the business.

BP’s upstream business is performing poorly now, but will be a major beneficiary from any increase in oil prices. While prices remain low, the price of oil has doubled off of its 2016 low.

And, there could be further gains in oil prices up ahead, as OPEC appears to have agreed to a production cut. For its part, BP management sees the oil market returning to balance. 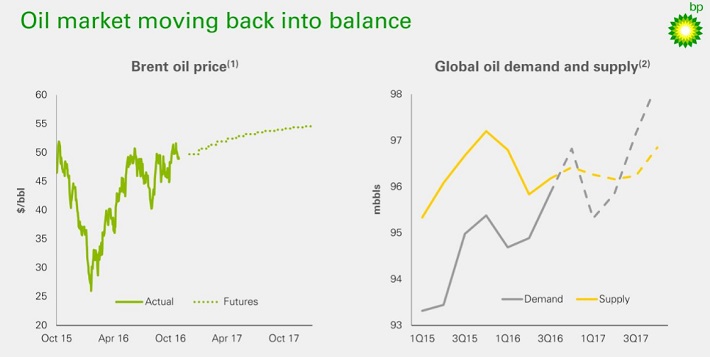 If oil continues to rally, BP’s massive upstream portfolio should return to profitability.

Things have already started to improve. Last quarter, BP turned a $1.6 billion profit. This reversed a $1.4 billion loss in the previous quarter. Over the first nine months of 2016, BP’s net loss is just $382 million, down from a $3.1 billion loss in the same period last year.

This is a difficult time for BP, but it is deploying several initiatives to restore earnings-per-share growth. One is asset sales. BP has undergone a huge divestment program of non-critical assets, to free up cash.

BP’s next major growth catalyst will be new projects.

By 2020, BP expects to bring 800,000 barrels of oil equivalents per day online. Completion of these projects will accomplish two goals.

First, finishing these major projects will be a big relief to BP’s cost structure. BP will no longer have to allocate such significant amounts of capital to building and developing these projects.

Next, once the projects ramp up production, they will generate cash flow. Even if commodity prices remain low, BP will benefit by turning these projects from a use of cash to a source of cash.

One specific area that is compelling for BP is in the North Sea. Its Quad 2014 field is 90% complete and expected to be finished next year. Peak production capacity will be 120,000 barrels per day.

BP is also investing heavily in natural gas and LNG. For example, its Oman Khazzan project is 70% complete and has a total recoverable resource of 10.5 trillion cubic feet.

While geopolitical conflict between Russia and Ukraine is resulting in an elevated risk profile, Russia remains a premier emerging economy. It is also one of the biggest oil-producing countries in the world. 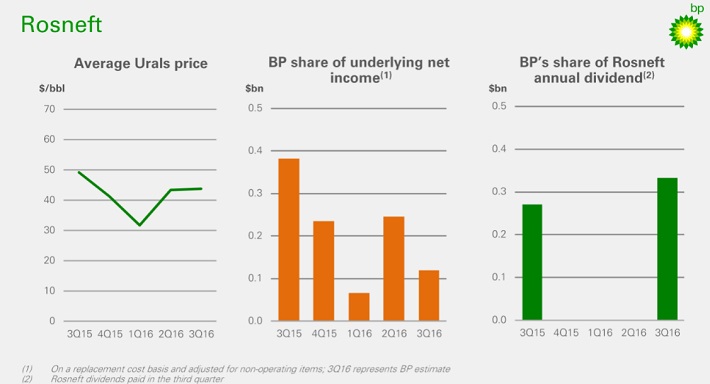 Rosneft contributed $432 million in net profit to BP over the first three quarters of 2016.

Operating a commodity-based business is a highly competitive industry. As such, it is critical for oil and gas companies to invest capital wisely. This is when being a global industry giant is a competitive advantage.

BP has a $116 billion market cap. Its massive size gives it immense financial flexibility. It can leverage its operational scale to cut costs and sell assets to raise billions of dollars when commodity prices decline. 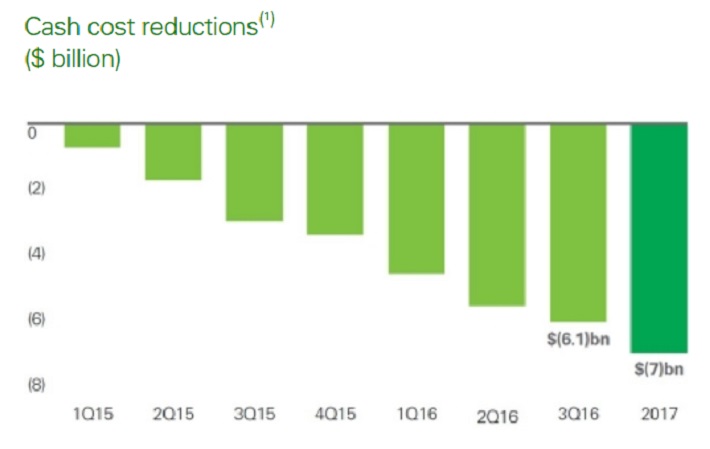 The company has a long history of using its size and scale to withstand these types of downturns. BP was incorporated all the way back in 1909. It has experienced wars and recessions over that time, and remains standing.

Many oil and gas companies have had to cut dividends over the past year. But BP has maintained its dividend and the outlook for the dividend is still positive.

It is using a combination of cost cuts, asset sales, and new projects to remain profitable and support its hefty dividend yield.

BP is a classic example of a high-yield, low-growth divided stock. While it may not return to dividend growth until oil prices are much higher, its 6.7% dividend yield pays investors well to wait.