For example, U.K. based energy giant BP plc (ADR) (NYSE:BP) has a 6.6% dividend yield. This compares favorably to its peers such as Exxon Mobil and Chevron, which have dividend yields of 3.8% and 4.1%, respectively.

Of course, a high dividend payout is only as good as the company’s underlying fundamentals.

The past year has been extremely challenging for BP, and Big Oil more broadly, due to plunging oil and gas prices.

BP is a global integrated oil and gas major. Its integrated model means it has both the upstream (exploration and production) and downstream (refining and marketing) operating segments.

Upstream activities are highly reliant on the price of oil. For example, BP’s upstream segment lost $937 million in 2015.

The good news is, now that oil prices have recovered to $50 oil, BP’s upstream business has returned to profitability. Upstream operations turned in a $574 million profit in 2016. Another reason for BP’s return to profitability last year was cost cuts, along with asset sales.

BP reduced capital expenditures by $2.5 billion in 2016, and it divested $2.6 billion of assets deemed non-critical to the future direction of the company.

The company plans to continue reducing costs and selling off assets to raise additional cash. Along with production growth, these initiatives are the reason why BP expects cash flow to increase significantly in 2018.

This gives BP the ability to sustain its current dividend, with the opportunity for future dividend increases if oil prices rise up ahead.

BP has several catalysts for future growth, the most important of which moving forward is new projects.

BP has a total of seven major projects set for completion this year. One major project was completed in the first quarter, another in the second quarter, with two more nearing completion. 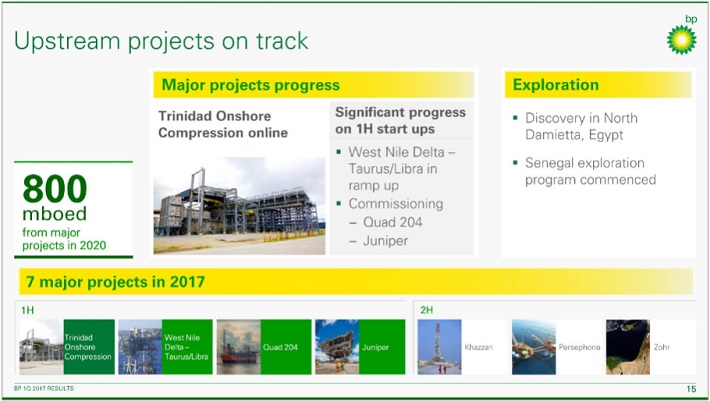 And, BP has reported its new project lineup is 15% under budget so far.

At the same time, the company continues to cut costs. Upstream cost of production declined 13% last quarter, to $7.22 per barrel.

Plus, BP reduced capital expenditures by $1 billion in the first quarter, from $4.5 billion to $3.5 billion year over year.

The benefits of production growth aligned with cost efficiencies are already being felt. In the first quarter, BP’s adjusted operating cash flow was $4.4 billion, an increase of 47% from $3 billion in the same quarter last year.

Underlying net profit was $1.4 billion for the quarter, a huge improvement from the $485 million loss incurred in the first quarter of 2016. Improvements in the upstream segment had a lot to do with it, as BP benefited from significantly higher oil and gas prices. 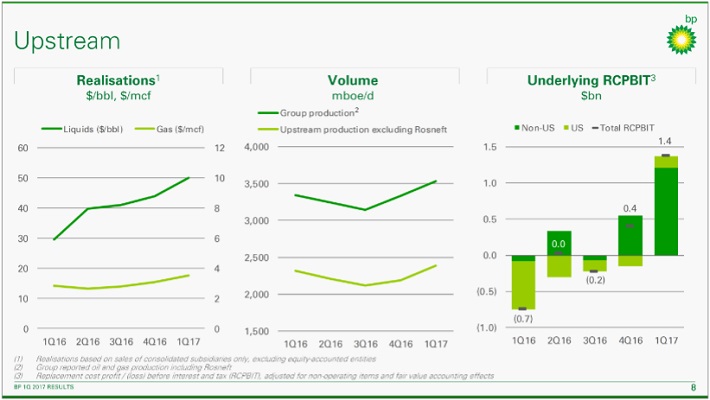 The combination of rising production and lower production costs should give BP a huge boost.

The company expects cash flow to increase significantly over the second half of the year, which sets it up very well to benefit from rising oil prices in 2018 and beyond.

As was the case last year, 2017 will be another year of asset sales and capital discipline. Divestment proceeds are expected to total $4.5 billion-$5.5 billion this year.

Lastly, BP will benefit from lower payments from the Deepwater Horizon spill in 2010. Management expects cash outlays from the settlement to be $4.5 billion-$5.5 billion in 2017. From then on, cash payments are expected to drop to $2 billion in 2018, and fall further to $1 billion per year in 2019.

BP currently has a dividend payout of $2.40 per share. The company did not cover the dividend with earnings-per-share last year, but the dividend is covered by cash flow.

Operating cash flow is the metric most integrated oil and gas companies scrutinize when making dividend decisions. As BP expects future cash flow to increase, it leaves room for potential dividend increases in 2018 and thereafter. 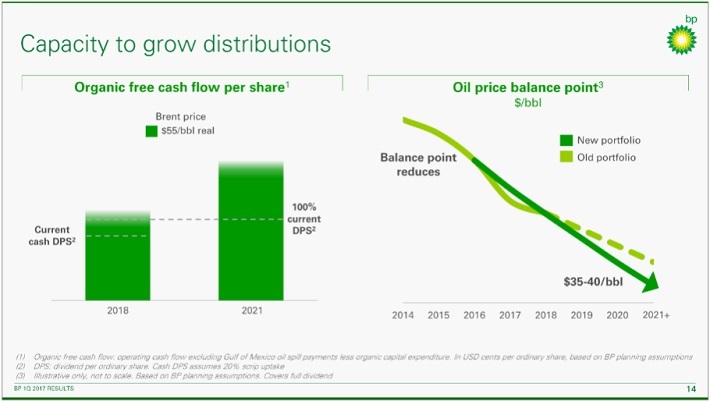 Investors should also be reassured by the fact that BP management has reiterated its position that the dividend is the top priority within the financial framework.

Oil prices would have to sink back to below $30, and stay there for a prolonged period of time, for BP to consider cutting its dividend.

BP has come a long way over the past several years. In that time, it has had to deal with tens of billions in financial penalties from the 2010 oil spill, as well as the huge decline in commodity prices.

But, thanks to asset sales and cost cuts, BP’s dividend appears to be secure.

There is also potential for its dividend to grow, if oil continues to rally, thanks to its huge lineup of new projects.

As a result, investors should view BP favorably as a high-yield dividend stock.