Last week the spectacular bull market in U.S. stocks that began in March 2009 continued with even more gains. On Friday, the S&P 500 hit another all-time high.

But the real action was in the bond market. Over the last three weeks, about half a trillion dollars has been wiped off the value of global bonds … despite lower than normal trading volumes.

According to Citigroup strategist Mark Schofield, the sell-off is a “stark reminder of just how congested a lot of market positioning has become.” This makes it “increasingly difficult for investors to exit those positions when the time comes to do so.”

“That means that it will be increasingly difficult for central banks to start backing away from their unprecedented stimulus efforts as growth takes hold – no matter how much they may want to – without causing a massive traffic jam of investors all trying to sell at once.”

Nobody knows whether the recent correction in bond prices (and the accompanying rise in yields) will continue or not.

It is almost too classic to believe. Serious economists – and anyone with any common sense – have realized for centuries that you can’t increase the quantity of debt without also decreasing its quality. The more you owe, the less likely you are to pay.

But central banks have been encouraging businesses, households, and governments all over the planet to take on more debt. They claim this will “stimulate” the economy… and that the resulting “growth” will make it easy to repay the debt.

Mario Draghi, the John Law of modern central banking, told us that the European Central Bank would persist in its delusions. (Law was a Scottish economist and gambler. In 1716, he set up the world’s first central bank in France and was responsible for the Mississippi Company bubble – a precursor to other paper-money-induced bubbles.)

Draghi has made it clear he’s determined to implement the ECB’s €1.1 trillion ($1.2 trillion) QE plan “in full.” As he put it in a recent speech in Washington, his policy moves “have proven so far to be potent, more so than many observers anticipated.”

And although Draghi admitted that low interest rates would “inevitably result in some local misallocation of resources,” he rejected claims that they threaten “overall financial stability.”

Why would bonds fall at the very moment when the biggest buyer in the world is promising to load up with more? Ah… that is what is so classic. While the ECB pledges to throw good money after bad, banks, hedge funds, and pension funds are beginning to see high-priced, low-yielding debt as a leaky boat. 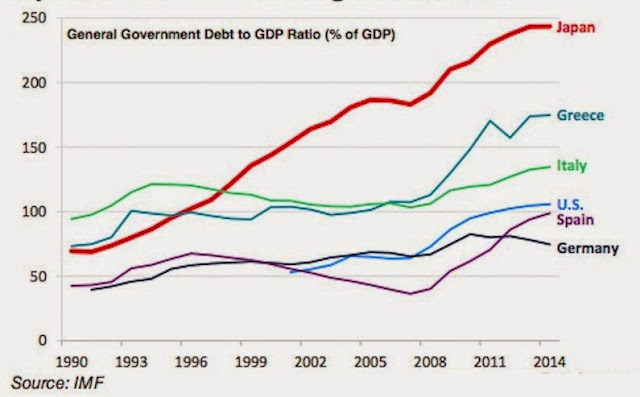 They’ve made a lot of money buying in anticipation of QE; they don’t want to lose their gains when the bond market sinks… as it inevitably will. The claims made on behalf of QE have never had any sensible basis in theory… and have once again proved ineffective in practice.

The Fed has increased the U.S. monetary base by more money than ever before in history. But this “recovery” is the weakest one since the end of World War II. It is so weak that it is a stretch to call it a recovery at all. The most notable recovery has been in the prices of financial assets. And that is more a function of central bank manipulation than renewed economic growth.

What’s more, financial asset prices can correct at a moment’s notice. And will! Asset prices pushed up by central bank stimulus are fundamentally phony. Because there is no real wealth creation behind them. The higher they go, the more they become detached from reality… and the more vulnerable they become. That is true for stocks and bonds.

In the case of bonds, it is… as we said… classic. You can’t improve your creditworthiness by borrowing more. It is inherently absurd for sovereign debt to go up in price as the borrowers sink further underwater … dragging investors with them.

Sooner or later they’ll all have to come up for air.