Biotech Wreck: What Is Next?

What an insane end of the week we just had, especially with the Biotech sector late in the week. We saw a multitude of stocks reverse hard this week in Biotech and then pretty much plunge if not crash on Friday.  This is all occurring during a final Blood Moon cycle that ends this weekend (the 4th in a series of eclipses), the end of the 7 year Shemitah cycle, and Mercury in Retrograde.  All of these cosmic signatures are rare to be happening at the same time, and we are seeing the insanity of crowds reacting both up and down to them.

We use a combination of many “Ingredients” in our forecast soup recipe.  One of them is Geocosmic signatures, and its only a maybe 5-10% component but sometimes it moves more front and center than others.  We have been forecasting a re-test of the 1867 lows on the SP 500 following a likely rally to 1980-2040 from the initial lows, and frankly a drop to 1810-1840 is also in our forecast as possible, so far so good, as we got as low as the 1910 area on the SP 500 this week after hitting 2020 highs last week.

We also pointed out last weekend that the Biotech index had run smack dab into a Fibonacci 61% retracement resistance line and this past week would be crucial for the sector. By the end of this past week we saw some insane drops from intra-week highs. XON for example peaked at $53 earlier in the week from the $39 August lows and then reversed in 4 trading days to trade in the 37’s on Friday. A drop of $16 per share in 4 days!  ZIOP almost hit $13 and and 4 days later was trading at $10.70 on Friday.  Celgene had recovered from $92 lows in August to $124, and by the end of this past week had dropped to $108.  Bluebird Bio dropped from $140 to $100 this past week.  Uniqure which was the subject of an SRP Research report in February saw a spike rally to $36 earlier in the week end up with a $12 decline to close near $24 on Friday. So look for continued volatility amongst these names and the sector for another 1-2 weeks as likely.

Our thoughts are that we may drop another 9% on the Biotech sector in the coming 5-10 trading days into October 10th.  We believe this pullback was due after the counter-trend rally. Many of the Biotech stocks will revisit their August lows if not a bit lower as insanity and panic set it near term. We believe it will prove to be an over reaction and a buying opportunity in selected names, and that is how we plan to play it at SRP with 1-2 names specifically.

Could we be wrong? Yes, of course as the market is in fact the final arbiter and we are merely players in the grand scheme.  Much of market volatility is due to computer trading and algo programs that can turn up and down on a dime. A sector like Biotechs can be dragged upwards and downwards without warning or notice, topping and bottoming quickly.  Once the computers sense a direction they pick up the ball and carry it down the field until someone makes a tackle.  Look for the Biotech sector and specifically the IBB ETF to re-test the 275-284 area from 310 currently as of Fridays close.

Below we lay out the IBB ETF chart, you can see the “B” wave was the 61% retracement area we pointed out last weekend and now we are in the C wave, which can be difficult to assess but we believe 275-284 makes the most sense for a low.  This represents a 30% decline from the highs, same as in 2014. 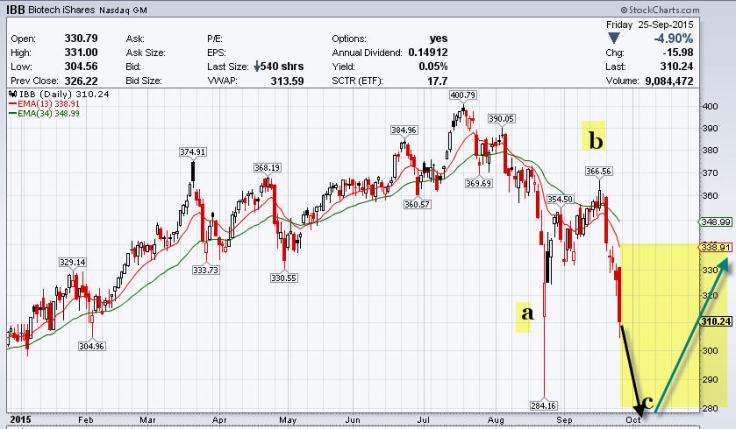 We have also been calling for a Gold bull cycle since July when we felt Gold was in our 1050-1090 bottoming area for its bear cycle from the 1923 highs in 2011.  This is so far working in our favor as we are positioned long at SRP Research for a 2016 Bull move up in Gold.  In addition, Oil is trying to form bear cycle lows and though volatile we are positioning as well for Oil to move up.

The Chinese market has gone through a 72% retracement already of its Bull cycle rally that topped out this year, so a re-test of those lows or a tad lower is possible as we have been saying which would take it to a 78% Fibonacci retracement.  To be sure , they are transitioning to a consumer led economy and Nike for one is happy about that as their earnings crushed it this week and their stock soared 9% on Friday.

With that said, we can again look to the percentage of NYSE stocks trading below their 200 day moving averages to see we are in a bear cycle in terms of underlying metrics of the market. This bear cycle has done a lot of damage to 80% of the stocks trading on the NYSE.  In fact, we are near multi-year lows for this metric.  We said last weekend to look for a re-test down to the 16% line from August 24th as likely, and this past week we in fact dropped from 26% to just over 20%.  This seems to be forming another near term bottom that could be met with a re-test low on the indices or a slightly lower low as we have pointed out.  Either we are entering Armageddon for the markets and we plunge, or we bottom out soon and opportunities present themselves amongst the rubble piles. 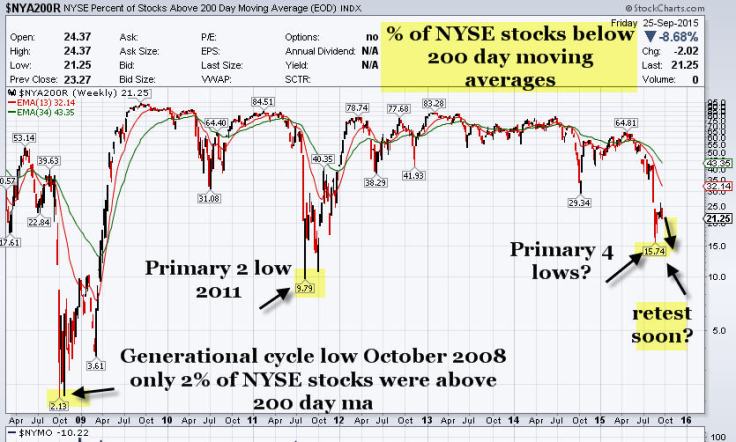 So essentially our thoughts remain the same as they have been for last 4 weeks in terms of forecasts. We think the SP 500 will re-test the 1867 lows if not 1810-1840 as likely, but because of multiple sentiment indicators pointing out a bottom soon we are not overly bearish other than the next two weeks of volatile trade into October 9th could be dicey.  We believe Gold is trying to form a a cyclical bull rally to 1300 in 2016 per US ounce, but obviously must hold that prior 1072 cycle low from July or that forecast will be off.  We think Oil is putting in bear cycle bottoms as well though volatile.  Biotech looks like it wants to re-test that August 24th low and possibly a bit lower, with some issues testing their prior stock price lows or a bit lower, others holding up higher than prior lows.

Many of the charts we look at each weekend appear to be still consolidating but many are at risk of sudden declines off their base patterns making entry very tricky of late.

Strap on the seatbelts, as we expect the next 10 trading days to be a bit crazy until we get past October 9th window, September and October are usually stormy… but oversold opportunities are likely to arise for aggressive investors who have cash and can pounce.

The Week Ahead in Life Sciences

Brexit: Biopharma Analysts Need to be Geopolitical Experts Too Now?