Between the Aussie and the Yuan

About two weeks ago I shifted the reader’s attention to the upcoming rotation back into commodities and the commodities FX play, i.e. the Norwegian Krone and the Aussie Dollar. While I had initially predicted back in May the 2nd, the Norwegian Krone has instead rallied on the back of appetite for Oil and the general lackluster appeal of the dollar. But that was and is still not the case for the Aussie Dollar. It seems that investors in the Aussie dollar are waiting for some cue, some development that has yet to materialize. What is this development and what would be its likely impact?

Despite the Australian economy being in relatively fair shape and with inflation levels still higher than its western peers, the Reserve Bank of Australia has keep the easing pedal pushed and slashed interest rates. And the basis for the RBA’s policy decision? Of course, still tepid data from China and an uptick in Australia’s inflation, which together lowered the core inflation in the country to 2.27%. The continued rise in housing prices, especially in the Sydney area, was largely ignored and essentially shrugged off by an RBA undeterred from turning off its accommodative policy.

Why is the RBA still Dovish?

It might seem rather puzzling as to why the RBA seems unmoved by the rise in housing prices, despite denoting its cognizance of the rise in its routine reports. For those who point to China as a key driver of the RBA’s protocols, it’s also puzzling that the People’s Republic of China’s rate cuts and that Beijing’s fiscal stimulus has not compelled the RBA to wait. Instead, the Australian central bank pressed forward with a rate cut. The question is why?

Firstly and foremost, the RBA has yet to see enough evidence that China is, indeed, responding to the stimulus which means that as far as the RBA is concerned, the outlook for growth has not yet changed in response to China’s measures.

Secondly, the RBA views the spike in housing prices as being driven by speculators rather than real demand for housing, especially by foreign speculators, primarily Chinese, who crowd into the Australian property market in search of yield. With the government in the process of curbing foreign speculators in the housing market through regulatory means, the RBA feels comfortable enough to ease policy and shrug off the bubbling housing market. Combined with the latest release of the RBA minutes, this invalidates the assumption that the RBA cut rates further.

So what will be the right cue for the RBA and consequently for markets to become upbeat again? Simply this: tangible proof that China is stabilizing. While there are various indicators in China to look at, the most relevant would be the HSBC Manufacturing PMI. Why? Because while China is still in the midst of a precarious balancing act, attempting to move away from manufacturing and more toward the Chinese consumer, a recovery in the manufacturing sector is still the key to easing the pressure of the Chinese economy.

As seen in the HSBC Manufacturing PMI data below, the reading is below 50 (a signal for contraction) for the past two consecutive months. Meaning both the RBA and Aussie investors are waiting for a move higher in order to turn more upbeat. For the RBA, it could mean less dovishness, and for investors, a renewed reason to buy the Aussie. Hence, the signal for investors will be a Manufacturing PMI that rises above the 50 threshold. 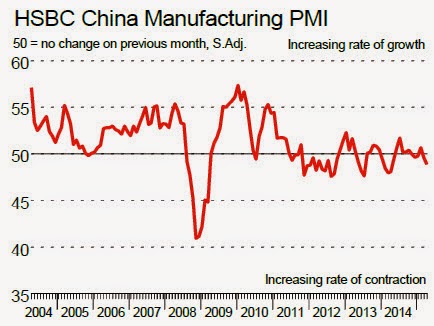 Between the Aussie and the Yuan

Ironically, the best and most effective measure to boost the Chinese economy, still, despite all the easing, as always, is a weaker Yuan. After all, a softer Yuan will be the key for the recovery in Chinese manufacturing, for easing pressure off of China’s credit market and for increasing demand for Australian commodities. Eventually, it will be a weaker Yuan which will be the backstop from further RBA rates cuts and, ultimately, a brighter outlook for the Aussie.

As the chart of the USD/CNY illustrates below, the pair is in the process of bottoming out. Meaning that while the Yuan has yet to depreciate back to 6.32 to propel Chinese manufacturing, it seems that the materialization of Yuan weakness is just a matter of time .

Back to the Aussie

If we swing back to what all of these factors means for the Aussie we get a particular sequence of events, all of which are required for the Aussie to move higher. First, the Yuan has to weaken, which will propel Chinese manufacturing, which will signal to markets that RBA rate cuts could be on hold, which will be the right cue for buying the Aussie. Once this sequence begins, it will be time to begin and map the possible trajectory for the currency and pin down possible targets for the AUD/USD. Until then, while the Aussie is still on our radar amid the allure of commodities, it is still waiting for the right cue.