A Sure Dividend reader question recently made me curious about what ratio best predicts recession losses on Dividend Aristocrats. I decided to look at different quantifiable commonly used risk proxies:

Unlike some of my other studies, this one uncovered some useful information that I was not expecting.

The experiment tests the 4 ratios above (using 10 years of data, starting at the end of 2007 and going through 1998) to see which best sorted for losses during the year 2008 – when the market collapsed.

The image below shows the Dividend Aristocrats at the start of 2008 used in this experiment (BUD, WWY, and ROH are excluded due to not having price data). 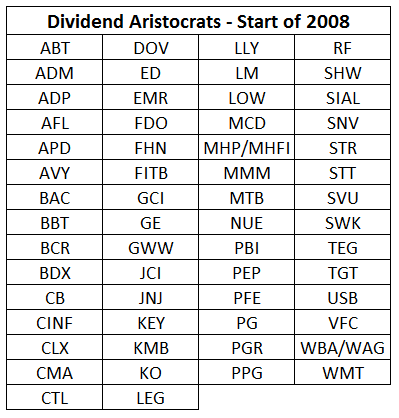 The further away the correlation is from 0, the more accurate a ratio was in sorting Dividend Aristocrats by return in 2008. The year 2008 was chosen because it has been the worst year for stocks in decades – it is an excellent year to test what happens when stock prices collapse.

Contrary to what I expected, Beta was by far the best predictor of losses during 2008 (using stock price data from 1998 through 2007). Beta had a correlation of -0.196 to 2008 returns of the Dividend Aristocrats – a far higher number than any other tested.

The 10 lowest Beta Dividend Aristocrats now are listed below:

There are several similarities with the current low Beta Dividend Aristocrats of now and those at the start of 2008. Consolidated Edison, Kimberly-Clark, Clorox, PepsiCo, and Procter & Gamble are on both lists. As you can see, the consumer products industry is heavily over-represented in low beta stocks.

Based on the study above, Beta is the best metric to apply to high quality stocks in order to find stocks that are likely to fall less during recessions. When recessions occur, the correlation between all stocks moves closer to 1; everything falls at the same time. Low beta stocks don’t fall as far as fast, and therefore tend to outperform in recessions.

The Dividend Kings: Dividend Stocks with 50+ Years of Rising Dividends