The “mini correction” of summer 2015 seems to have run its course, at least for now. But by just about any metric you want to pick, U.S. stocks are expensive and priced to deliver lousy returns.

Last month, I noted that the cyclically-adjusted price/earnings ratio, the valuation tool favored by Yale professor Robert Shiller, was slightly above its pre-crisis 2008 levels. It suggests stocks might actually lose money over the next eight years. And earlier this year, Dent Research’s resident short seller found that the market’s price/sales ratio and Tobin’s Q told much the same story.

Today, let’s look at a variation of one of Berkshire Hathaway Inc.(NYSE:BRK.A)’s Warren Buffett’s favorite tools. Mr. Buffett has said over the years that the best back-of-the-envelope metric for judging the value of the overall stock market was to compare it to the size of the economy. So, let’s see how the values stack up: 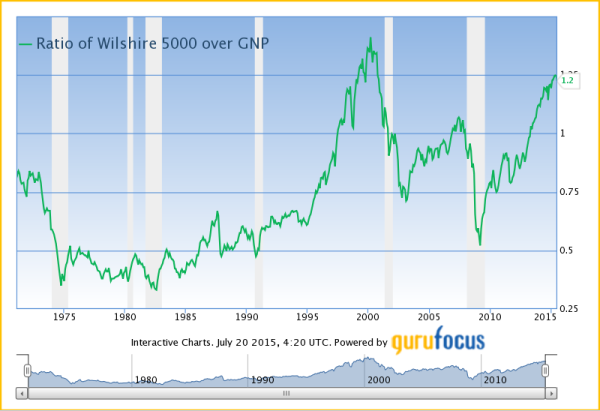 The chart above tracks the Wilshire 5000, a very broad index that tracks virtually the entire stock market, and compares it to gross national product (GNP). This is different from the more commonly used gross domestic product (GDP). But it’s a better measurement of stock prices because it looks more specifically at the growth American businesses are creating – not foreign ones.

By this measure, stocks are much more expensive than they were in 2008. They’re even rapidly approaching their values during the go-go years of the 1990s tech bubble.

The stocks-to-GNP ratio is a broad sword, not a surgical scalpel. It cannot tell you with any precision when the market is topping. But as Mr. Buffett says, it gives you a good gut check on pricing and on what to expect over the next five to 10 years. And on that count this metric is flashing some major warning signs.

If you’re going to invest, stay tactical and don’t be afraid to sell and take profits. Keep a little more cash on hand than usual. And understand that it’s not realistic to expect returns like those of the past five years in the five years to come. If your retirement is depending on that happening, you need to take a long look in the mirror and consider rethinking your retirement plans.