Bear Flag Pattern for Gold and Silver: Will It Be a False Breakdown, or the Start of a New Leg Down?

Back on January 14, our Chart Of The Day highlighted the fact that gold stocks had fallen to their lowest levels…as in, ever. At least as measured by the PHLX Gold/Silver Index, better known as the XAU. The prior low in the index going back to its 1983 inception had been 41.85 in November 2000. On January 14, it eclipsed that level, closing at 41.52. In subsequent days, the XAU fell as low as 38.36 on January 19. Presently, however, the index has rallied back to test the aforementioned breakdown level. This looks to be a key juncture here for the gold bugs and the, er, gold exterminators? 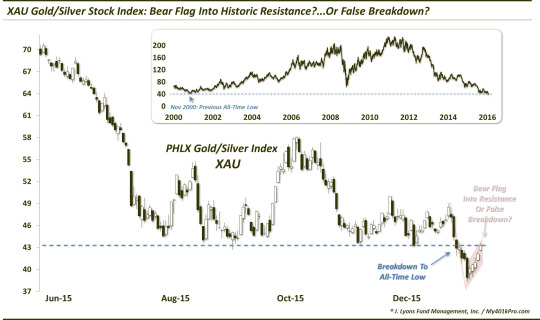 The bullish scenario would have the XAU break back above the breakdown level and, preferably, back above the short-term tops in December and early January near 49-50. If the index can accomplish this in very short order, it would set up a classic “false breakdown” scenario. That is, a breakdown to new lows that is quickly reversed back above the breakdown level. These setups can lead to explosive and durable rallies as sellers cannot demonstrate the ability to keep prices down at new low levels. In this instance, considering we are talking about “all-time” lows, the pattern could be even that much more significant. And it could lead to the type of rally that gold bugs have been waiting a long time for.

However, the bearish scenario remains the default option until proven otherwise. The sector remains in a downtrend (not a news flash), and just off of all-time lows. It is also brushing up against, but has not yet broken through, the level marking the former all-time lows. That is formidable resistance.

Furthermore, the XAU is arguably forming a “bear flag” pattern over the past week or so. This is a counter-trend pattern in a downtrend whereby prices move higher in a relatively shallow ascent. Ultimately, these patterns typically lead to another extension of the downtrend, to or beyond the prior lows. Now, the acceleration of the past two days may have some doubt this interpretation of a bear flag. However, in our view, it is still too early to make the determination, especially if the index reverses today’s gains in a rapid manner.

So the jury is still out on this development for gold stocks. The result of the current test of former all-time lows could very well lead to an out-sized move, either way. You may call it a coin flip. We would call it a very bearish setup – at the moment – with the potential to develop into a very bullish setup. As always, we’ll let prices tell us what to do.