With Bank Earnings On Deck, Here Are The 5 Names You Need To Watch This Week 1/13/15 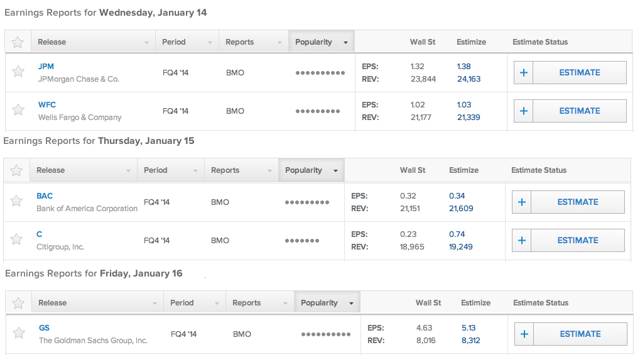 On Monday Alcoa (NYSE:AA) kicked off the 4th quarter earnings season by posting EPS of $0.33 and revenues of $6.4B, beating both ours and Wall Street consensus estimates. On the back half of this week the big banks kick things into high gear with 5 huge announcements.

Last quarter this group of 5 banks put up earnings growth of 24% and revenue growth of 5%, that narrative is changing a bit in the fourth quarter with negative earnings of -0.1% expected, and low sales growth of 2.7%. Deflated numbers are likely due to weakness in fixed income, currency and commodity (FICC) trading throughout the quarter due to extreme market volatility, low rates reducing interest revenues, further legal settlement costs and mixed housing data which continues to negatively impact lenders. Here’s what we’re anticipating to hear from the titan’s of the financial industry.

Wednesday morning JPMorgan Chase & Co. (NYSE:JPM) and Wells Fargo (NYSE:WFC) kick off earnings season for the major banks. JPMorgan earnings are predicted to come in at $1.37 per share, 5 cents above the Wall Street consensus and 5% better than last year’s results. Wells Fargo is projected to report earnings of $1.03 per share, just a penny better than the Wall Street consensus and a 3% improvement year over year (YoY).

In addition to a 5% gain in earnings, contributing analysts are also looking for JPMorgan to boost its sales by 4% to $24.1 billion. Balancing out some of its moderate growth, JPMorgan has agreed to settle two large lawsuits this month. The first commits the bank to pay $100M in relation to allegations of foreign exchange rate rigging. The second agreement will settle a $500M class action suit tied to the sale of toxic mortgage-back securities sold by Bear Stearns which JPMorgan acquired during the financial crisis. 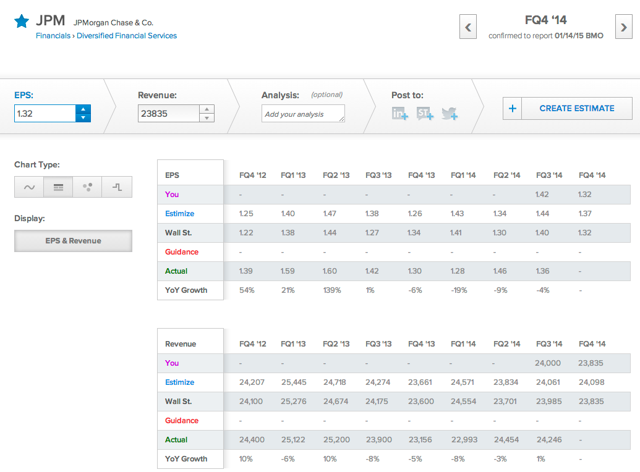 Analysts on Estimize are looking for Wells Fargo to grow its revenue by a slightly more modest 3%. The country’s largest mortgage lender, which is often seen as a bellwether for the housing market, struggled in 2014 with mortgage originations. In Q1 they funded $36M worth of mortgages, the lowest amount since acquiring Wachovia in 2008, and that number only increased to $47M in Q2 and $48M in the most recent quarter. Despite a brightening consumer picture and low interest rates, housing data remained mixed for much of Q4, so any improvement in mortgage lending for the bank may be modest. 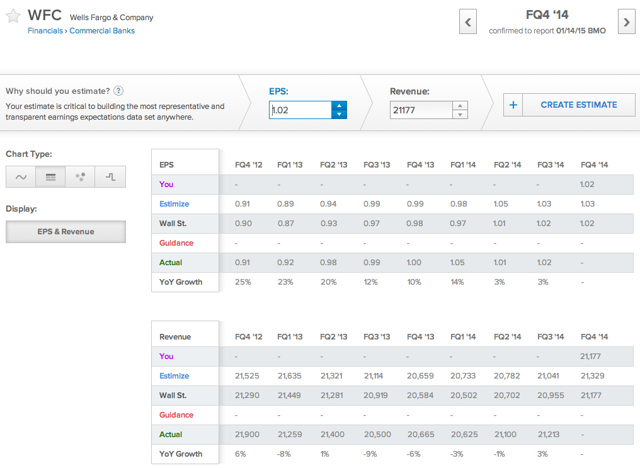 Bank of America (NYSE:BAC) and Citigroup (NYSE:C) release their results on Thursday. For Bank of America, the Estimize consensus is calling for EPS of $0.34, $0.03 higher than the Wall Street expectation and 17% higher than the year ago result. However revenues of $21.6B would mark a year-over-year decrease of 0.6%.

Like JPMorgan, Bank of America will also be paying legal expenses related to its foreign exchange business in the fourth quarter. The bank surprised investors in November when it revised its third quarter profit lower by $400M due to such legal fees. The biggest threat to fourth quarter profits, however, could be due to a decrease in FICC trading revenues. CEO Brian Moynihan offered a weak outlook for Q4 trading revenues at a Goldman Sachs industry conference last month, saying that they would be lower than both year-ago levels and the third quarter’s. While volatility typically leads to higher transaction volumes, Moynihan maintains it will do little to help the bank’s fourth quarter sales. 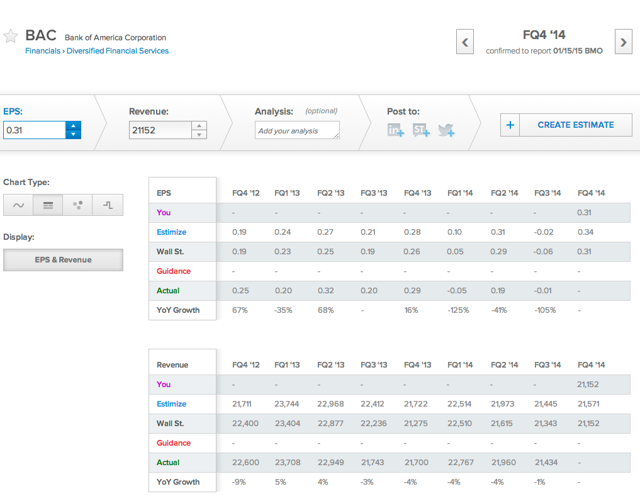 Citigroup’s consensus has shifted down significantly to $0.65 from $0.97 just 10 days ago. This implies a decrease in earnings of 21% YoY, yet with revenues of $19.2B suggesting 8% growth. “The real challenges…were the trading environment, where we saw sharp moves” in commodities, corporate bonds and foreign currencies, Citigroup’s CEO Michael Corbat said at a conference in December. He predicted that the bank’s markets revenues would be down 5% in Q4 on a YoY basis. Adding insult to injury is the fact that the bank also had to pay legal fees after regulators slapped them with fines for attempting to manipulate foreign exchange markets as in the case of JPMorgan and Bank of America. 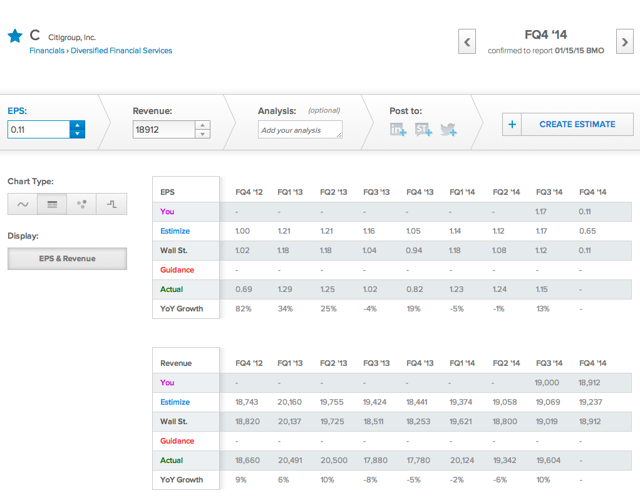 Similarly, weak trading revenues are expected to hit Goldman Sachs(NYSE:GS) in Q4. Typically a big moneymaker for Goldman Sachs, weaker revenues from FICC trading due to volatile markets are expected to hit the bank more sharply than its peers. Last quarter, Goldman reported an increase in FICC trading of 74%, it was also the first quarter in over a year to see revenue gains in fixed income trading. After complaining in the earlier part of 2014 about the lack of activity, many banks are likely to mention how they were hurt by extreme and abrupt price movements on their earnings calls. In just the last week, the Estimize EPS consensus estimate for Goldman Sachs has fallen to $5.10 from $5.27, still an 11% increase YoY. Revenues on the other hand are only anticipated to come in at $8.3B, down 5% from the year-ago quarter. 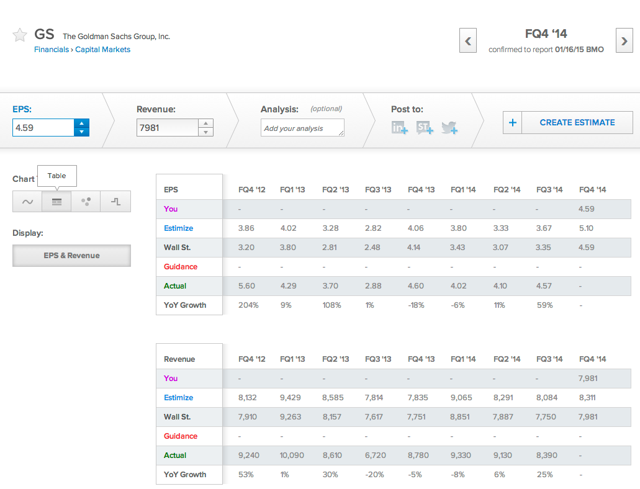