As the Athletic Apparel Scene Heats Up, Can Lululemon Retain its Loyal Customer Base?

Athletic Apparel Retailer, Lululemon Athletica Inc. (NASDAQ:LULU), is set to report their fiscal Q4 2014 results before tomorrow’s opening bell. The Estimize EPS consensus calls for $0.73, a penny above the Wall Street expectation and the company’s own guidance. Revenues of $597M are actually lower than the Street’s consensus for $598.2M and the company’s guidance of $597.5M. 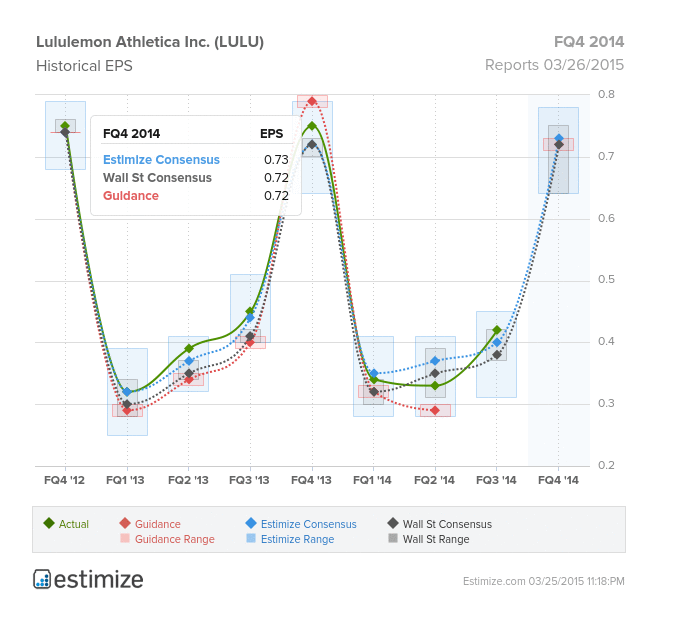 Lululemon has had a rough couple of years, starting in March 2013 with its “pantsgate” saga during which the company had to recall around 17% of its black yoga pants because they were too sheer, that segued into a public relations nightmare that ensued when founder Chip Wilson made disparaging remarks about women’s bodies. During this time the company was also going through a dry spell for selection and variety, but recent improvements to product mix and customer service seem to be paying off.

In January, the company forecast an increase in same store sales that was roughly double analysts’ expectations. It appears the company has figured out its supply-chain issues, and reinvigorated customers with a greater variety of merchandise. Add to this the fact that the company operates a “scarcity” model, making only limited quantities of product in order to spur demand and minimize inventory. This has resulted in a huge secondhand market for used merchandise, with fans often paying more than the original price for discontinued and out of stock items. 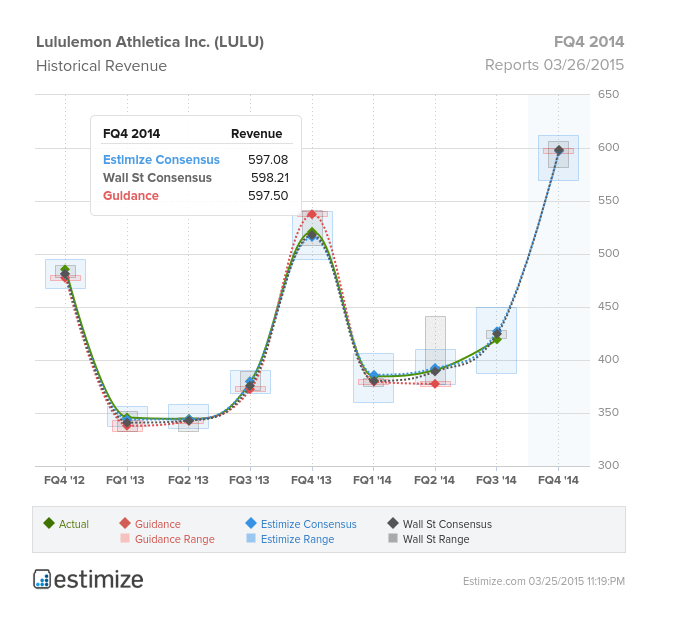 However, the stock has seen downgrades, most recently and detrimentally by Goldman Sachs who says the company is still at risk from growing competition from the likes of Under Armour Inc (NYSE:UA) and Gap Inc (NYSE:GPS)’s Athleta, among others. The stock dropped as a result, but is still up 9% for the year. While competition is no doubt heating up in this space, Lululemon has a loyal crowd of followers, unmatched by any of its peers at this juncture. It’s up to new CEO, Laurent Potdevin, to ensure the needs of this dedicated base are continually met.