Investors are piling into Netflix, Inc. (NASDAQ:NFLX) ahead of the company’s first quarter earnings report due after the closing bell. Netflix stock is bumping up against all time highs and investors are expecting another stellar quarter. Have shareholder demands become unrealistic? Three months ago Netflix warned that earnings in the first quarter would come in well below what investors were hoping for at the time. Contributing analysts on Estimize were predicting 97 cents in first quarter earnings when Netflix guided for just 60. Netflix’s expansion into major European markets, foreign exchange headwinds, and the cost of ramped up original content production are all working against the company’s bottom line. 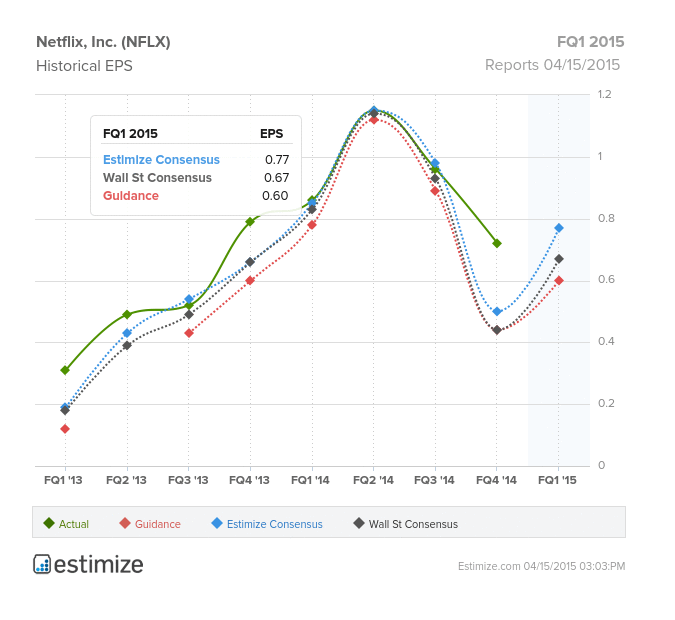 Contributing analysts on Estimize are throwing their caution to the wind. The consensus estimate from 95 analysts is that Netflix will report 77 cents in EPS, blowing guidance and the Wall Street consensus out of the water. Based on Netflix’s track record Estimize contributors have good reason to set the bar high.

Last quarter Netflix reported earnings of 72 cents per share, making a mockery of its 44 cents per share guidance. Netflix management has a clear track record of under-promising and over-delivering. Given that pattern of behavior, the airing of the new season of House of Cards, and the acceleration in European subscriber numbers last quarter it makes sense to expect much more today than guidance is offering.

One reason to check crowdsourced financial forecasts is to understand what the market really expects and has baked into the stock. This afternoon Netflix better up another colossal beat to justify its share price to investors.