There are currently two companies to hold the coveted AAA credit rating from Standard & Poor’s:

Apple Inc. (NASDAQ:AAPL) has been speculated by many to be the next company to hold this perfect credit rating.

The technology giant has strong free cash flows, a loyal consumer base, and one of the most impressive balance sheets that I have ever seen.

However, the AAA credit rating is notoriously difficult to achieve. It would imply that Apple is considered more creditworthy than the U.S. federal government and all but 15 states. Each of these sovereign entities has the ability to tax their citizens.

This article will discuss the possibility of Apple earning the next AAA credit rating from S&P.

The company is divided into five segments for reporting purposes:

Because of the popularity of its products, Apple has grown to be the largest company in the United States based on its market capitalization of ~$735 billion.

Apple has also shown impressive profitability. Apple’s fiscal year 2015 and 2016 were the 3rd and 5th most profitable years by any company in history, respectively.

The “Mother of All Balance Sheets”

“Our financial position has never been stronger. We [have] the mother of all balance sheets.” – Apple CEO Tim Cook on a company conference call

Apple’s balance sheet has been discussed in detail by its investors and is one of the main reasons why the company is speculated to hold the next AAA rating.

Apple investors should note that the majority of Apple’s cash hoard lies overseas. On page 55 of Apple’s most recent 10-K, the company wrote:

“As of September 24, 2016 and September 26, 2015, $216.0 billion and $186.9 billion , respectively, of the Company’s cash, cash equivalents and marketable securities were held by foreign subsidiaries and are generally based in U.S. dollar-denominated holdings. Amounts held by foreign subsidiaries are generally subject to U.S. income taxation on repatriation to the U.S.”

Adding up the company’s current cash, cash equivalents, and marketable securities (both short-term and long-term) gives a figure of $246.1 billion. So while the numbers were not reported at the same time (September versus December), we can estimate that ~88% of Apple’s liquid capital is tied up overseas.

To use this capital domestically, Apple must ‘repatriate’ these funds, which means to transfer the money to domestic accounts.

When a repatriation event occurs, the company must pay the U.S. corporate tax rate of 35%, with a credit applied for any international taxes already paid.

Luckily for Apple (and its investors), the company may soon have an opportunity to repatriate its international capital at a lower tax rate.

The new Presidential administration has been quite vocal about the possibility of a repatriation tax holiday. Companies could bring back overseas capital at a temporarily reduced tax rate of 10%.

For some context, the last repatriation tax holiday occurred under the Bush administration at a rate of 5.25% – and 843 companies returned more than $300 billion of capital to the United States.

Regardless of the precise details, Apple would benefit greatly from repatriation tax reform.

In the meanwhile, Apple has been issuing long-term debt at attractive interest rates to fund domestic purchases. This has included dividends and stock repurchases, both traits of shareholder-friendly stocks.

Apple’s long-term debt has been increasing over time in recent years as a result of this capital allocation strategy.

The company’s long-term debt is compared to Johnson & Johnson and Microsoft in the following diagram. 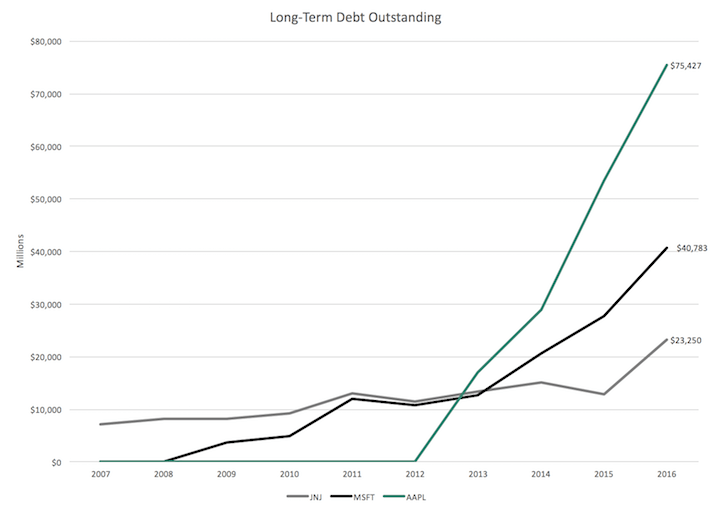 Apple has more debt than the other companies in this peer group.

However, this is not really relevant – Apple is also the largest company in the peer group, so more debt would be expected (all else being equal).

Investors are better off comparing the company’s leverage metrics.

The ratio of Apple’s long-term debt to shareholders’ equity to compared to Johnson & Johnson and Microsoft below. 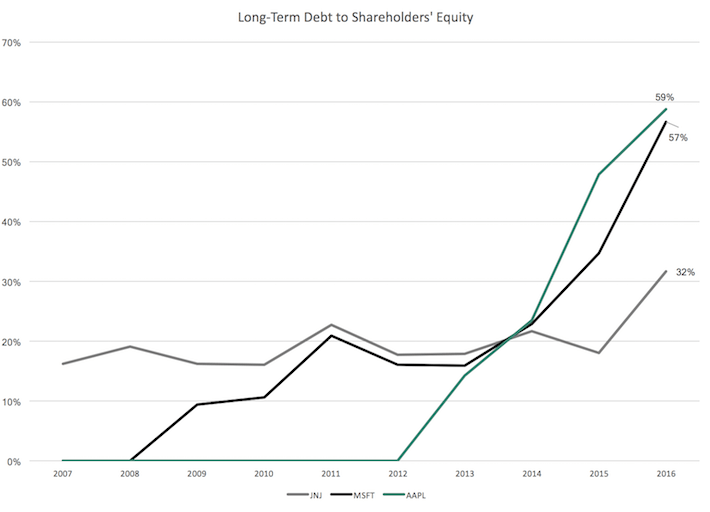 From the chart, it can be concluded that:

While Apple’s leverage ratio is the highest in the peer group, it is only by a very narrow margin.

Combining this with the company’s massive cash pile (and a potential tax repatriation holiday for Apple’s overseas cash) leads me to believe that Apple’s balance sheet is not holding them back from achieving a perfect credit score.

Rather, I suspect the cause is the company’s earnings mix.

Apple’s earnings mix is not ideal for the company’s shareholders, despite the company’s impressive bottom line growth over the past decade. 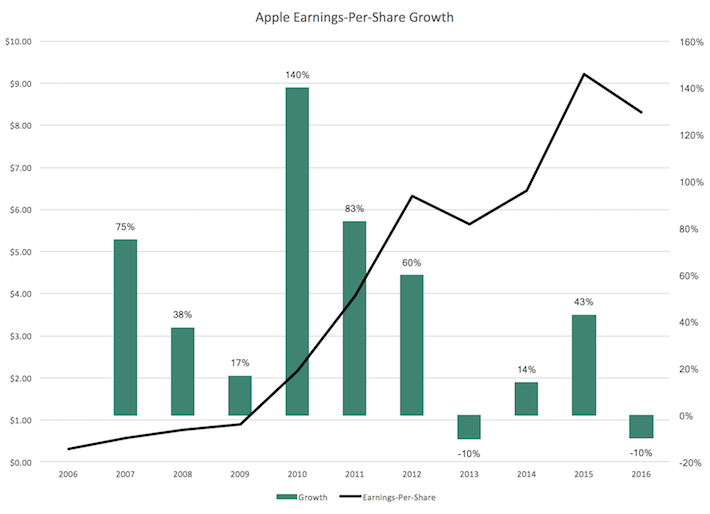 However, Apple currently generates the vast majority of its profits from iPhone sales. 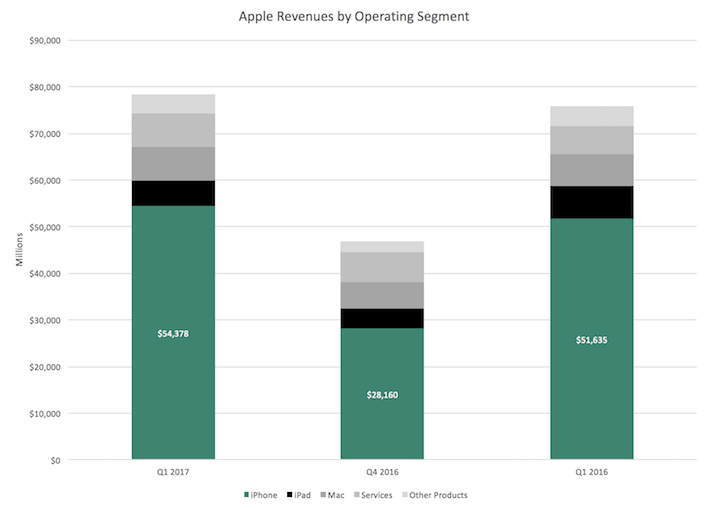 This is not ideal. While many would say that the iPhone is objectively one of the best smartphones on the market, Apple’s business would be crushed if a better product was introduced by a competitor.

Earnings would decrease substantially and Apple might not be able to afford its interest payments. These concerns absolutely impact the company’s credit rating – and a lack of diversification is one of the key differences between Apple and the AAA-rated Johnson & Johnson and Microsoft.

Investors are very aware of the importance of iPhone sales to Apple’s business model. This was evident when the company reported first-quarter financial results.

It takes a huge amount of buyers in the market to move the needle by 6% on a company as large as Apple ($700 billion+ market capitalization). Clearly, investors were pleased with the profits generated from Apple’s iPhone segment. 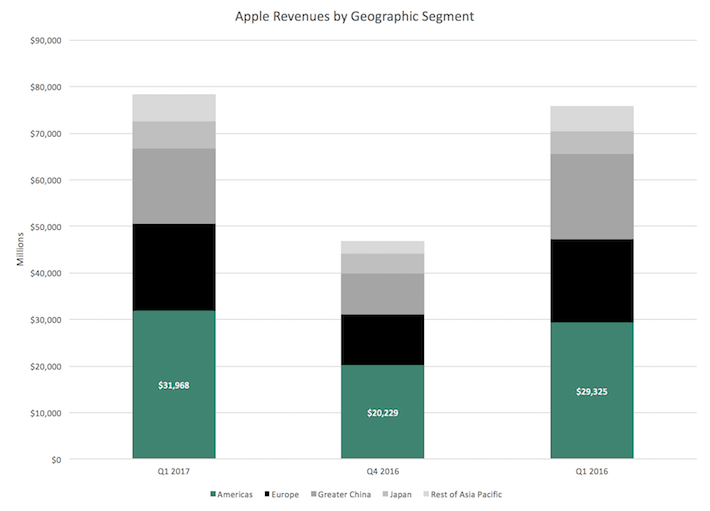 It is highly likely that the rating agencies (along with the company’s investors) are concerned about the amount of concentration that Apple has on the iPhone. Luckily, more operational diversification is on the way.

This will be driven by one primary factor, in my view – the growth of Apple Services.

This segment currently composes only 9% of Apple’s revenues but has been growing rapidly. Apple’s Services segment is already the size of a Fortune 100 company.

Looking ahead, Services revenue is expected to grow to double in the next four years – which represents a CAGR of ~19%. This will bring up Apple’s overall efficiency, as the Services segment has higher margins than the rest of Apple’s businesses.

Additionally, Macquarie research analysts have recently published a note saying they believe Apple Services to be undervalued. If the segment was valued similarly to PayPal, Macquarie estimates that the stock would be 10% higher after a sum-of-parts analysis.

Apple is a high-quality business with many of the low-risk characteristics of a creditworthy company.

With ‘the mother of all balance sheets’ the only thing holding Apple back from the coveted AAA credit rating is a lack of operational diversification.