But how do investors filter for qualitative metrics, like business quality?

A great way to find high-quality businesses is by looking in the portfolios of famous investors with strong track records. One such investor is Bill Ackman, the founder and Chief Executive Officer of the hedge fund Pershing Square Capital Management.

Fortunately for individual investors, large funds like Pershing Square must disclose their holdings in a quarterly filing (called a 13F filing) with the U.S. Securities & Exchange commission. Pershing Square recently filed their 13F for the period ending 12/31/2017.

When people think of Bill Ackman, they often think of one of today’s most prominent activist investors. Activist investors take large stakes in underperforming companies with the hope to make changes to management teams and thus improve business performance.

This strategy was seen in Pershing Square’s investment in the Canadian Pacific Railway Company. Ackman first invested in this underperforming Canadian railway in 2011, where he saw an opportunity to improve its operating ratio (which is defined as operating expenses divided by net revenues).

At the time, CP Rail’s operating ratio was hovering around 90%, well above its peer group. This indicated major room for profitability improvements.

Ackman purchased $1.4 billion of stock in CP Rail, which gave his fund an ownership stake of 14.2%. This was enough to get Ackman elected to CP’s board of directors, where he implemented a new CEO – Hunter Harrison, a retired Chief Executive from rival Canadian National Railway (CNI).

Ackman and Harrison believed they could improve the company’s operating ratio from ~90% to ~65% in four years.

The rest, they say, is history. The following diagram displays the performance of CP Rail during the time period after Ackman’s investment. 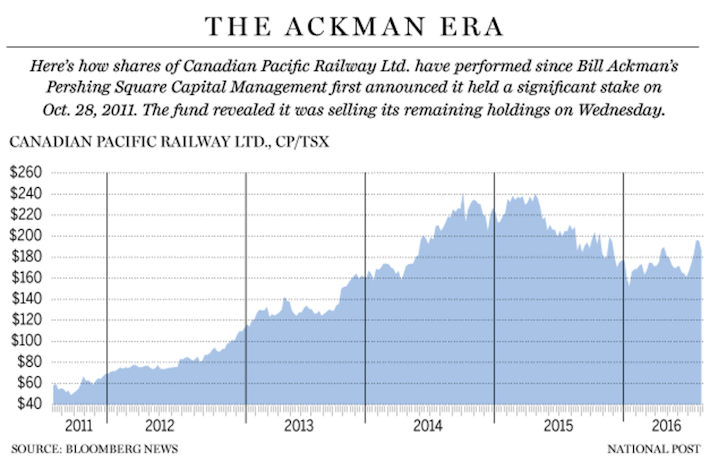 The CP strategy, which saw Pershing Square triple its original investment in less than five years, is a textbook example of Ackman’s activist investment philosophy.

Ackman’s portfolio exhibits less portfolio diversification among the top four positions than any of the three super-investors mentioned above.

A large reason why Ackman’s portfolio is highly concentrated is because of the nature of his investment strategy. To be an activist investor and make substantial changes to management and corporate governance, you need to own a large proportion of the underlying business. This leads Ackman to make concentrated bets, moreso than many other famous investors.

Ackman has recently sold his stake in Valeant for a loss of approximately $4 billion – which caused 2015 and 2016 to be Pershing Square’s worst performance years ever. Since Valeant is known to no longer be a Pershing Square holding, it’s business model will not be covered in detail in this analysis. I will touch briefly on the events that led to Valeant’s precipitous stock price decline. The reasons behind the decline in Valeant’s stock price are extremely complicated.

Valeant is a drug company that was once expected to revolutionize the pharmaceutical industry. Former Valeant Chief Executive Officer Michael Pearson grew the company by acquiring smaller drug companies with promising product pipelines and slashing costs wherever possible.

Often, these expense reductions were in the research & development department, which hurt the long-term prospects of Valeant’s subsidiary companies.

To make matters worse, Valeant typically financed these acquisitions with debt. The company was highly leveraged as a result. When the company delayed filing their 10-K in 2016 (more on that later), this broke debt covenants which meant that lenders could recall their bonds prematurely. Accordingly, investors were concerned about a possible default on Valeant’s debt.

Valeant’s business model also came under scrutiny when a Valeant executive was arrested for involvement in a fraudulent kickback scheme with Philidor Rx Services LLC, an entity created with the intention to facilitate money laundering.

The Valeant executive would run a large proportion of its business through Philidor, which was a mail-order pharmacy, helping to squash competition and increase profits for both Valeant and Philidor. The executive at Valeant responsible for the arrangement would ‘kick-back’ a portion of his large bonus to the CEO of Philidor in exchange for participating in the scheme.

When the Philidor scheme was made public, Valeant instigated a large internal review of its accounting procedures. This review ultimately delayed the filing of the company’s 10-K last April, which was why the company nearly defaulted on its outstanding debt.

With all that in mind, it is no surprise that Pershing Square’s Valeant investment was highly unprofitable. Highly leveraged companies that house money laundering schemes and are late making regulatory filings do not typically make attractive investments.

Bill Ackman’s fund originally purchased shares of Valeant in February and March of 2015. Valeant’s lost ~95% of its value between Ackman’s purchase and sale, which was reflected in the performance of his fund:

If Ackman held a more diversified investment portfolio, his fund would not have been affected as badly by the poor performance of Valeant.

Looking ahead, Valeant is trading at a bargain valuation (though it is still not an attractive investment). The company reported adjusted earnings-per-share of $5.47 for fiscal 2016, which means that today’s stock price of $9.48 represents a price-to-earnings ratio of just 1.7x. The reason why Valeant’s current valuation multiple is so low is because of the vast amount of uncertainty regarding the company’s future.

Its attractive valuation does not make up for fraud allegations and predatory drug pricing. The price-to-earnings ratio is not an accurate valuation metric when we don’t know if the underlying earnings are real because of instances of fraud.

For income investors, Valeant also does not pay a dividend.

As such, Valeant remains a sell despite its depressed price, and investors who continue to hold the stock are exposing them to high risk and the potential for increased stock price volatility if more fraud schemes are made public.

Pershing Square Capital Management owns 2,882,463 shares of Chipotle Mexican Grill, Inc. (NYSE:CMG) with a market value of $1.1 billion. It is the fund’s second-largest position and represents 18.4% of its invested assets.

Ackman’s investment in Chipotle is quite new and was based on an expected turnaround in the company after food safety concerns were widely-publicized in 2015. Chipotle’s stock continued to lag in 2016, which presented an opportunity for Pershing Square to initiate its ownership stake.

“On September 6, 2016, we announced a 9.9% stake in Chipotle Mexican Grill which we purchased at an average price of $405 per share. Chipotle has built a superb brand pioneering the “fast casual” restaurant industry with the success of its outstanding product offering, unique culture, and powerful economic model. We have followed the business for years, noting how it has disrupted the fast food industry with its high quality, delicious and customizable hot meals that are prepared quickly and sold at affordable prices. The company has been significantly negatively impacted by food safety issues beginning in the fourth quarter of 2015 which caused a peak decline in average unit sales of 36%. In response, the company has implemented enhanced food safety protocols over the past year, and worked to win back lost customers. While traffic and sales have begun to recover, average unit volumes were still 19% below peak levels as of the fourth quarter of 2016.

We have always believed that a good time to buy a great business is when it is in temporary trouble. While Chipotle’s reputation has been bruised, we think that with the passage of time and improved operations, marketing, technology, and governance initiatives, the business will not only recover but become much stronger.”

Ackman’s investment came at an opportune time. Chipotle’s current stock price of $463.62 represents a 14.5% increase over his cost basis of $405.

The food safety issues that Ackman describes in the passage above were very serious. The company had to close locations because of reported cases of E. coli, salmonella, and norovirus at different regions across the United States. There were also animal rights violations at one of Chipotle’s suppliers, which caused the company to remove carnitas (deliverd from that particular supplier) from its menu for months.

Fortunately for Ackman and his investors, the turnaround seems to be making decent progress. Management’s most important priority of eliminating health concerns linked to its food has been completed, and consumers are beginning to restore trust in the Chipotle brand. On the company’s fourth-quarter earnings conference call, management said:

“I feel good about the comp trend. I feel like we’re at least holding our own and perhaps starting to see an inflection point. But most importantly, we are doing this with very little promo. So we’ve weaned ourselves off of promo. Most of the improvement from December into January was we’re going up against a softer comp, but I feel really good about that.“

Chipotle’s management believes they are starting to see an inflection point, and although a softer 2015 number helped December’s comparable restaurant sales, the worst has passed for Chipotle’s food safety scandal.

Chipotle’s food safety concerns have abated, but the company still does not look like an attractive investment at today’s level based on fundamental metrics. Chipotle’s current stock price of $463.62 represents a ~600x multiple of 2016’s earnings-per-share of $0.77.

The reason why this ratio is so high is because of the company’s earnings decline in 2016 caused by the food safety scandal. For context, Chipotle’s earnings-per-share were $15.10 in fiscal 2015. If the company maintained that earnings power, its current valuation would be a much more reasonable valuation of 30.7x. This is in line with other high-growth food stocks like Starbucks.

Looking ahead, Chipotle is expected to open approximately 200 new stores in fiscal 2017 and comparable restaurant sales to increase in the high-single-digits. However, Chipotle’s valuation will still be expensive even if this growth is realized, and investors can find much more reasonable restaurant valuations elsewhere. Chipotle also does not pay a dividend, so investors are not paid to wait for price appreciation.