Was Friedman wise to ditch Baozon, but step up shares in Momo and Alibaba? Alexander Friedman has held the role of CEO of GAM Holding AG for the past three years. The man behind the asset manager GAM dialed back in Baozun Inc (ADR)(NASDAQ:BZUN) in the second quarter, instead seeing more advantage in fellow Chinese tech rivals Momo Inc (ADR) (NASDAQ:MOMO) and Alibaba Group Holding Ltd (NYSE:BABA), as revealed by the 13F form the asset manager filed with the SEC.

Why should you trust Friedman’s opinion? Before the Group, Friedman guided UBS Wealth Management and Wealth Management Americas as global chief investment officer and also led the UBS Global Investment Committee as both chairman and group managing director. Friedman in his yesteryear was trusted by Bill Gates a.k.a. the “world’s richest man” by Forbes for most of the last two decades as the CFO of the Bill & Melinda Gates Foundation. Also having served in the White House during Bill Clinton’s presidency and as an assistant to the U.S. Secretary of Defense, Friedman has accomplished quite a lot of experience under his belt- ever since his days of Columbia University School of Law, Business School, and even his undergrad days at Princeton University.

However, though Friedman’s Swiss fund house may have outperformed expectations in the beginning half of 2017, shareholders were less than enthused to say the least when Friedman received a raise to the tune of 20% after the Zurich-based company reported a cut in pretax profit of 40%. Shareholders were up in arms shouting for Friedman to get the boot after being awarded 6.1 million Swiss francs last year when the company barely had over 1,000 people employed in its workforce and shares that had fallen well past 40% since its peak in April two years prior. Present-day, after various initiatives have been taken, the Swiss fund house’s profits are back on acceleration mode, and Friedman’s firm is now mid-comeback- which means every stock play counts.

Baozun Gets a Shave

Friedman opted for some backpedaling on Baozun in the second quarter, leading his Swiss fund house to shed loose 38,00 shares in the Chinese retailing consultant/service provider, taking the take down to 87,000 shares worth $1,905,000.

Consider that China’s largest e-commerce company, Alibaba is one of Baozun’s mammoth investors. Does Friedman’s withdrawal bode wisely? Initially, upon releasing its second-quarter print, the company’s stock took a 24% nosedive to the market floor. Interestingly, though Eileen Deng of Deutsche Bank has decided to shift to the sidelines on the stock, she sees more upside potential. In fact, the analyst specifically downgrades the stock based on the price-earnings ratio indicating any prospective share-drivers- but still maintains a “growing investment behind the robust GMV.”

Believing that “the share price has factored in all the positive catalysts,” the analyst downgrades from a Buy to a Hold rating on BZUN, but lifts the price target up 20% to $30, which implies a just under 4% downside from where the shares last closed.

As far as Deng sees it, the company’s GMV growth came in “strong” at 63.5% year-over-year, outperforming her expectations for 58%, to RMB3.6 billion. Additionally, BZUN’s same brand-growth hit 50%, a “solid” level, says the analyst, attributing this to the “6.18” promotion. Revenue for the quarter reached 888 million, 10% above the analyst’s expectations and a 7% beat against the Street. For the third quarter, the BZUN management team set an outlook of 50%+ for service revenue growth, also outclassing the analyst’s forecast of 44%.

“It should increase its technology investment in 2H to develop the SaaS product and other data analysis tools. GMV, however, is likely to reach 65% in FY17E (vs. prior DBe 56%). The stock has risen 18% in the past six months (vs. Nasdaq 8%),” writes the analyst.

Ultimately, even with a downgrade, aside from some risks of higher/lower GMV growth, rapid-fire and sluggish new brands, and competition as a whole, the analyst maintains a largely positive encouraged perspective on the stock: “SaaS and Shopdog likely to expand; investment to rise Baozun has established an innovation centre focusing on the SaaS product and other IT capabilities. We expect an RMB15-20m additional investment budget. The SaaS product, NEBULA+, is designed for medium or domestic brands (not merchants) for a more efficient storefront set-up in official websites and WeChat. The company, meanwhile, plans to expand the usage of Shopdog among existing brands during Singles day. We expect the technology investment to continue in 2018, with a limited revenue contribution from new initiatives in the short term.” 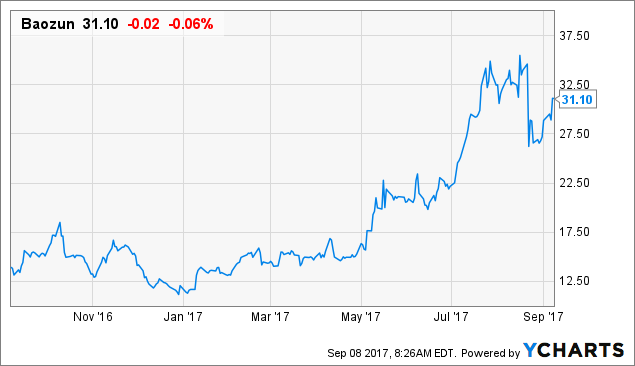 Momo is a Chinese tech player that seems to show more promise from where Friedman is standing, as Friedman boosted his position in the stock up 153,665 shares to 584,762 shares worth $21,623,000. It is an investment that already saw shares rising 7% after Fan Liu of Goldman Sachs initiated bullish coverage on the Chinese social media stock- a stock shrewdly shifting to “the power of content.”

“MOMO is transforming from a unique location-based social network linking strangers (social ‘pub’) to an entertainment platform containing a variety of content including live streaming, short videos and social games (fun ‘club’),” cheers the analyst, who believes, “As a result, we expect MOMO’s addressable user base to expand on the back of its broader value proposition, rising user time spent and increasing user stickiness.”

Looking to the next year, Liu forecasts revenue coupled with net income CAGRS to reach 24%, soaring to 28% within four years thanks to user expansion, ARPU growth, as well as strength in operating margin.

Why is Momo captivating interest, from Friedman’s pedal push to the analyst’s bullish bet? Liu boils her positive case down to two leading points: “(1) Continuous product innovations to increase the diversity of use cases and improve user stickiness/retention. With MOMO refreshing the app with new big updates every 2-3 weeks, we expect the company to provide a series of updates in the coming months focused on improving the features of version 8.0, which was launched on July 12. (2) Ongoing offering of new-format entertainment content including in-house developed games, variety shows and talent competitions (particularly in the year-end) to attract new users and increase the engagement of existing users.”

As such, the analyst sees reason to back the niche player” and initiates a Buy rating on MOMO stock with a $46 price target, which represents a close to 22% upside from current levels.

The word of the Street echoes Liu’s bullish praise on this Chinese social media stock’s opportunity ahead, even in a ring of heavyweight social media players like Facebook. TipRanks analytics exhibit MOMO as a Buy. Out of 2 analysts polled by TipRanks in the last 3 months, both are bullish on Momo stock. With a return potential of nearly 30%, the stock’s consensus target price stands at $49.00.

Of the Chinese stocks, how does Alibaba fare up against GAM’s second-quarter trades? Clearly, Friedman pinpoints exciting potential, as Friedman rolled the bullish dice on another 433,133 shares, taking the asset manager stake up to 1,229,511 shares worth $173,235,000.

This could prove to be a savvy quarterly play, considering Mexico is now angling to sell its goods through Chinese trading, relying on BABA’s business-to-business e-commerce website as the connector making it all happen. Jack Ma, the executive chairman of the Chinese retail giant is collaborating with president of Mexico Enrique Peña Nieto on a deal where BABA will advise various businesses in Mexico. The training will specifically teach in sharpest ways to practice e-commerce, digital payments, logistics, as well as analysis.

This agreement focuses on small and mid-sized businesses in Mexico that want to sell their products abroad. Under the agreement, as per Alibaba, the Chinese retail giant will help train Mexican businesses in best practices in e-commerce, digital payments, logistics, and analysis. Considering China hosts the most massive consumer market across the globe with a rising middle class, Mexico could stand to learn from BABA’s tech prowess, coaching businesses in Mexico to improve their marketing tactics in China.

Mexican President Nieto explains, “By partnering with Alibaba, we can expand Mexico’s export options in China and in Asia more broadly, while enhancing Mexican [small- and medium-sized enterprises’] knowledge of e-commerce and cross-border trade.”

Notably, of Mexico’s biggest trading alliances, China ranks third- and the collaboration hits during a Trump-led U.S. era, with Trump inciting tension between his rapport with the Mexican government amid immigration and trade policy discussions for new change. One change which the U.S. President has warned is to ditch the $1.2 trillion North American Free Trade Agreement- the trading anchor between the U.S., Mexico, and Canada.

Wall Street’s confidence backing this Chinese tech player is strong, with TipRanks analytics showcasing BABA as a Strong Buy. Based on 17 analysts polled by TipRanks in the last 3 months, all 17 rate a Buy on Alibaba stock. The 12-month average price target stands at $186.88, marking a nearly 10% upside from where the stock is currently trading.