Shares in semiconductor stocks Advanced Micro Devices, Inc. (NASDAQ:AMD) and Micron Technology, Inc. (NASDAQ:MU) soared on the news that worldwide sales of semiconductors reached $37.7 billion for November 2017. This figure comes in 21.5% higher than the sales reported for the same month last year, and 1.6% above October 2017 sales.

Bernstein Research analyst Stacy Rasgon commented that the month-to-month rise of 1.6% was a pleasant surprise given the average result for November of a 2% decline. He noted that the areas of particular strength include ‘logic’ chips and DRAM. In contrast NAND chips and microprocessors remained in line with expectations. Five-star Wells Fargo analyst David Wong termed this a ‘solid exit’ for the industry for 2017. According to Wong “growth in ICs excluding memory is stabilizing in the high single digit to low double-digit percent range.” DRAM prices rose in respect for “price per bit,” but prices for NAND fell slightly.

Interestingly, the data- released by the Semiconductor Industry Association (SIA) revealed sales increases in all regional markets. American continued to post the strongest gains at 40.2%, followed by Europe and China both with gains of over 18%. China is still the largest semiconductor market with sales of $11.9 billion. Now the SIA is anticipating that annual semiconductor sales can reach $400 billion:

“The global semiconductor industry reached another key milestone in November, notching its highest-ever monthly sales, and appears poised to reach $400 billion in annual sales for the first time,” says SIA President & CEO John Neuffer. “Global market growth continues to be led by sales of memory products, but sales of all other major semiconductor categories also increased both month-to-month and year-to-year in November.”

Semiconductors – microchips that control all modern electronics – are the backbone behind the global trillion-dollar electronics industry. These microchips enable the systems and products we use to work, communicate, travel, entertain, harness energy and make new scientific discoveries. Plus smartphones will require higher-capacity memory solutions and increased storage in the coming years especially as features like augmented reality become standard.

Word on the Street

Overall, we can see that the market has a very bullish outlook on Micron, but less so on AMD. Based on ratings from the last three months, Micron has a ‘Strong Buy’ analyst consensus rating with 19 buy ratings and only three hold ratings. Even though MU has already soared by 87% in the past year, analysts are confident MU can hit $58.50. This suggests a further 33% upside from the current share price.

Not only is Micron benefiting from important demand trends, but its financials are also very impressive. For example, the company recorded $6.8 billion of revenue for the quarter ending Nov 2017 up an incredible 71% from the same quarter in the previous year. Cloud and traditional enterprise data center trends are boosting demand for memory and flash storage solutions. DRAM revenue growth is spiking due to increasing enterprise sales for data center markets.

But the outlook for AMD is more dubious according to the Street. On AMD analysts have a cautious Hold consensus rating, as revealed by TipRanks. Over the last three months, this breaks down into 7 buy, 8 hold and 4 sell ratings. The $14.50 average analyst price target indicates 32% upside from the current share price. However, the company maintains its fair share of bullish supporters. They say that the stock has massive growth potential on the back of impressive new products like the Thread Ripper processor which make the company a real contender to larger rivals Nvidia (on the GPU front) and Intel (for CPUs). 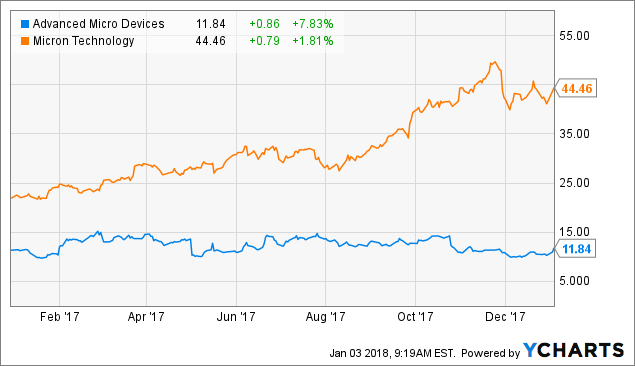