Prime Minister Shinzo Abe’s US visit was, overall, a success. His meeting with President Obama and his Congressional speech created the impression of a leader who is capable of delivering. During his visit to the US two years ago, Abe somewhat surprised Japan–US watchers with his sudden statement that ‘Japan is back’. This time, whether you like him or not, few would doubt that Japan — and Abe — is back. 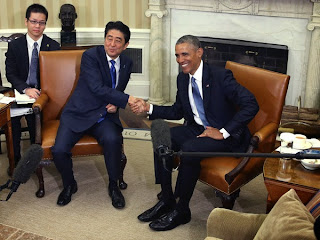 The focal points of the Abe–Obama summit were security and the Trans-Pacific Partnership (TPP). Abe’s new defence and security policy, including revising the interpretation of the Constitution and the new Japan-US defence cooperation guidelines, portend a closer, more effective alliance. Abe’s readiness to go ahead with the TPP also created the impression that economic ties will play an equally important part in the relationship.

There are hiccups to deal with. The most difficult issue in defence ties — Okinawa’s opposition to moving the Futenma base to Henoko — has not been resolved in Japan. Okinawa Governor Takeshi Onaga has already expressed strong disappointment and is now planning his own trip to Washington. Some of the TPP’s measures are meeting deeply rooted criticism in some parts of Japan that seriously fear that the TPP might damage important aspects of Japanese society.

However, these problems did not come to the surface during Abe’s visit, which overall served to confirm the positive achievements of the long-standing alliance. Abe’s speech to Congress maintained this positive note of an enhanced and strengthened alliance.

The speech was noteworthy on three counts.

First, Abe repeatedly emphasised shared democratic values and a clear recognition that from the period of the Meiji Restoration and into the post-1945 era, it was the US from whom Japan learned about democracy. Abe conveyed Japan’s gratitude to the US for its genuine help after Japan’s defeat in 1945. With this clear homage to American democracy, combined with gratitude towards America’s behaviour during the occupation, Abe successfully banished the image created by the message in his 2012 election campaign of ‘escaping the post-war regime’.

Second, Abe also stressed the prosperity that democracy has brought to both societies, which can become the basis of peace and future development. America and Japan are countries for whom respect for democracy is a point of genuine accord, and a starting point for future collaboration. The confident optimism with which Abe depicted a future of development based on democracy and prosperity injected new dynamism into the bilateral relationship, which members of Congress appreciated judging by the frequent standing ovations.

Thirdly, it was Abe’s statement on history and war that attracted the most attention in Japan, in the US, and particularly in China and South Korea. Here Abe chose a very distinctive approach. As in his Canberra speech in 2014, he touched upon historical events that are extremely sensitive to American memory: Pearl Harbor, Bataan Corregidor and the Coral Sea.

Abe described the war memory issue based on his personal experiences, such as his time spent at the World War II Memorial and the 4000 gold stars he saw there. ‘With deep repentance in my heart’, Abe said, ‘I stood there in silent prayers for some time. On behalf of Japan and Japanese people I offer with profound respect my eternal condolences to the souls of all American people that were lost during WWII’.

Abe did not use the word apology, and his reference to Bataan Corregidor was indirect and did not have the clarity of Ambassador Fujisaki’s statement in 2009. However, it is hard to deny that Abe expressed Japan’s humility in his own way.

With regard to Japan’s wartime conduct in Asia, Abe stated that: ‘Post war, we started out on our path bearing in mind feelings of deep remorse over the war. Our actions brought suffering to the peoples in Asian countries. We must not avert our eyes from that. I will uphold the views expressed by the previous prime ministers in this regard’. The key words of ‘apology, aggression and colonial rule’ were not included, but the unambiguity of upholding former prime minister Tomiichi Murayama’s 1995 statement, which has served as the official position of all prime ministers over the last 20 years, cannot be escaped.

In contrast, it is surprising that he omitted any reference to the comfort women issue. It was all the more surprising because Abe responded at question and answer session after his summit with Obama that ‘when I think of these “comfort women”, who have been victimised as the result of human trafficking and have gone through indescribable pain and suffering, my heart aches. My feeling is the same as my predecessors. I inherit the Kono Statement and I have no intention to revise it’. This is one of the most constructive statements Abe has made so far on this issue.

Abe has finessed his tactics if not his strategy. I assume that he is prepared to take further action to bring about reconciliation on this issue in cooperation with South Korean President Park Geun-hye. But at this point Abe may be limiting his public declarations so as not to stir up domestic public controversy. Starting with a speech to Congress might have been biting off a little too much.

Abe was no doubt also influenced by Representative Mike Honda’s speech to Congress on 21 April — one of the strongest statements denouncing Japan on the ‘comfort women’ issue. Perhaps Abe did not want to be seen to be bowing to foreign pressure. But he runs the risk of inciting backlash from Korean Americans to pressure Seoul not to make any compromises with Japan. If this happens, it would worsen the vicious cycle between Japan and South Korea on this issue.

It would be disappointing to see the genuine progress made in the Washington speech erased by clumsiness with respect to South Korea.