Today, long term investors are challenged in navigating the course and lining up that long drive for a investment that will provide them a better than par return.

Where should investors be looking for reliable income and potential capital gains that are minimally impacted by today’s investing hazards. The answer?  Health Care Stocks.

The health care sector has traditionally been a “go to” sector when the economy turns sour.  The sector is much less impacted by crude oil price volatility and one off events like Brexit.

The baby boom generation has reached retirement age and this rising tide of aging humanity will be flowing through the global economy for the next 35 years.  It is well documented that as people age, they use more health care services, equipment, and pharmaceuticals.  This mega trend rising tide will lift the health care sector for many years to come.  For readers looking for more detail on this rising tide of aging boomers, I previously published an article entitled Riding the Age Demographics Wave to Higher Returns.

The second macro trend that will push health care stocks higher is the Affordable Care Act (ACA).  Regardless of your political stance on the ACA, it is here for now and has added some 10M – 13M new people to the ranks of those with medical insurance.  These newly insured will be using more medical services, equipment, pharmaceuticals in the future.

Since I lean heavily towards dividend income investing (DGI), I tend to follow, study, and choose dividend paying stocks, with solid balance sheets, with a history of growing revenue, earnings, and dividends.

AbbVie Inc (NYSE:ABBV) is one of those stocks that fits my investment criteria.  This article presents the investment thesis for ABBV.

ABBV was spun off from Abbott Laboratories on January 1, 2013 and officially listed on the NYSE on January 2, 2013.

ABBV has roughly 28,000 employees in 170 countries around the globe and has a current market capitalization of $97B.  The company maintains its headquarters in Chicago, IL.

ABBV is a research-based biopharmaceutical company engaged in the discovery, development, manufacture and sale of a broad line of proprietary pharmaceutical products. The company focuses on treatments for conditions such as chronic autoimmune diseases in rheumatology, gastroenterology and dermatology; oncology, including blood cancers; virology, including hepatitis C and human immunodeficiency virus; neurological disorders, such as Parkinson’s disease; metabolic diseases, including thyroid disease and complications associated with cystic fibrosis; as well as other serious health conditions.

Like any R&D based pharmaceutical company, ABBV develops and maintains patents on the pharmaceuticals it develops.  Those patents don’t protect the company’s intellectual property forever so ABBV is continually working to maintain its pipeline of new and/or more effective treatments.

One of ABBV’s top earning drugs, Humira, will have its US patent expire in December 2016 and in April 2018 in the EU.  Humira is a biologic injectable treatment for rheumatoid arthritis, is approved for treatments in over 60 countries, and represents roughly 60% of ABBV’s current revenue uptake.

A number of companies are working on bio-similar forms of Humira in anticipation of the US patent expiration.  Obviously, a patent expiration of a drug with such a significant impact on ABBV’s revenue and earnings warrants some focused energy on behalf of the company to either protect the patent rights or develop other pharmaceuticals to replace the revenue.  ABBV is doing both.

ABBV’s patent attorneys are working overtime to patent other forms of Humira.   AbbVie is doing its best to pursue the patents using the US Patent Office’s Track One expedited option. This expedited options ensures that a patent is issued in 12 months.  Using this process, a new patent portfolio of Humira could gain protection as far out as 2030.  These new patents include anti-TNF antibodies, formulations, and crystalline forms.  The company is also pursuing another option in suing manufacturers of bio-similar drugs to stop or slow the development of Humira copies.

The second strategy ABBV is pursuing is to acquire or develop new pharmaceuticals to eventually replace the revenue and earnings generated by Humira.  In this strategy, ABBV has eight late stage products under development or being deployed that ABBV estimates are worth in the range of $25B to $30B peak annual revenue.  This compares very favorably with Humira’s peak annual revenue estimate of $18B.  These new products are shown in the chart below with the height of each block representing the relative revenue contribution. 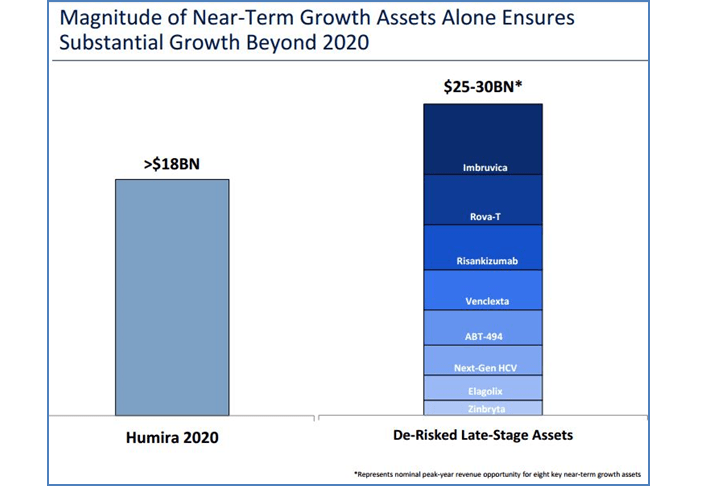 While an investment in ABBV carries some risk due to Humira’s heavy contribution to ABBV’s revenue and earnings, ABBV appears to be on top of the issue with two aggressive and potentially accretive strategies going forward.

ABBV has performed well in the short time since its spinoff from ABT.  That should be expected as ABT is also a solid pharmaceutical company in its own right.  In the three years ABBV has been independent, it has grown its revenue, earnings, and dividends paid.

The four charts below show those metrics as well as the dividend payout ratio for the last three years. 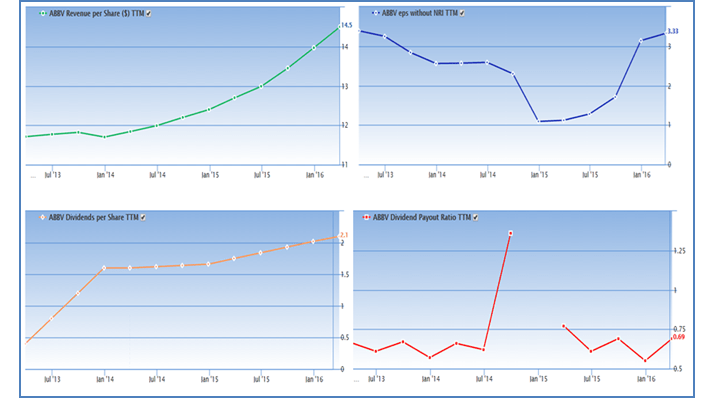 Potential investors should ask why ABBV’s earnings per share dropped in the 4th quarter of 2014.  ABBV attempted a buyout of Shire in late 2014.  The merger talks were terminated in October 2014 following the US Treasury’s rewrite (reinterpretation) of the tax regulations governing the merger.

This unfortunate event cost ABBV a $2.2B breakup fee paid to SHPG.  This also caused the dividend payout ratio to spike in the 4th quarter of 2014.  Other than this event, ABBV’s financial performance has been excellent though we only have 3.5 years of performance from which to judge.

A look at ABBV’s dividend growth shows the company has been sharing the wealth with its shareholders.  Since the spinoff, ABBV’s dividend has grown at an average annual rate of 9.3%.  The chart below show the dividend performance. 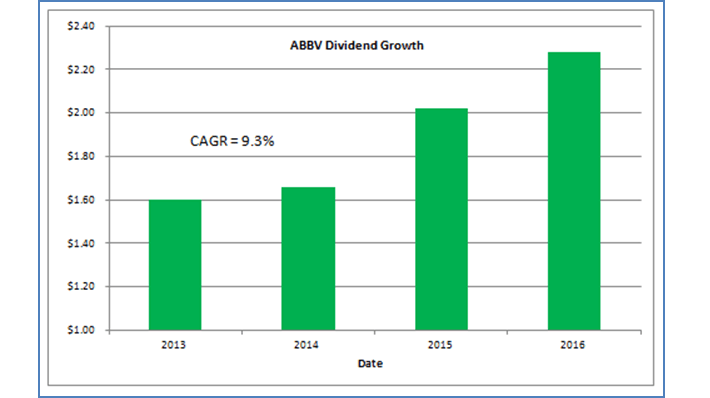 If we look at only the last 3 years, the dividend has grown by an average annual rate of 11.1%.  Not too shabby for a company that sports a yield of 3.8%.

Readers should note that the 2016 dividend value is based on trending out the first two quarters of the year.  Overall, ABBV has been accommodating to its share holders and currently has an ongoing share buyback program to boost share value.  ABBV’s management is guiding for a 10% increase (range midpoint) in earnings-per-share for 2016 which should also translate into an increase in the dividend payout to shareholders for 2017.

The street thinks well of ABBV’s prospects.  Of the 22 analysts that follow ABBV, 14 rate ABBV a BUY, 1 rates ABBV as OUTPERFORM, 6 rate ABBV as a HOLD, and 1 rates ABBV a sell.  The analyst’s consensus 12 month price target for ABBV is $70.  With ABBV’s share price at $60 as of the writing of this article, that represents a 16.7% potential gain plus a 3.8% dividend yield along the way.

ABBV currently has a solid investment grade credit rating of A- from S&P with a stable outlook.  ABBV’s debt metrics are also very good.  ABBV’s 2015 annual report lists total debt at $31.3B and long term debt at $29.2B.

These are very large numbers but what we are interested in is whether ABBV is generating sufficient earnings to service that large debt load.  With EBITDA of $8.2B and total interest expense of $686M, ABBV’s EBITDA to Interest Expense ratio is a very healthy 12.  Anything over 8 is generally considered “good”.  Likewise, ABBV’s LT Debt to EBITDA ratio is a very reasonable 3.6.  A debt to EBITDA under 4 is generally considered “good”.

The bottom line is that ABBV’s balance sheet appears very solid and they should easily be able to service their existing debt with room to take on additional debt for potential acquisitions.

ABBV at roughly $60/share appears to be fairly valued.

The company has a long dividend history of 44 consecutive years of dividend increases (including its time as part of Abbott Labs).  This makes ABBV one of just 50 Dividend Aristocrats – S&P 500 stocks with 25+ years of consecutive dividend payments without a reduction.

The BioPortfolio is the only sure way to make profits trading biotech stocks. Learn more HERE and set up your top notch portfolio in seconds.