A $7.6 Billion Write-off Plus Layoffs Is Never a Good Sign For Microsoft Corporation (MSFT)

Microsoft Corporation (NASDAQ:MSFT) announced that it was going to shut down the Nokia phone unit, take a $7.6B write-off (more than the $7.2B they paid for it,) and lay off another 7,800 employees.  That makes the layoffs since CEO Nadella took the reigns almost 26,000.  Finding any good news in this announcement is a very difficult task. 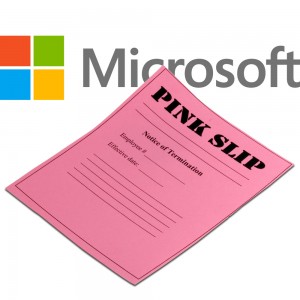 Unfortunately, since taking over as Microsoft’s #1 leader, Mr. Nadella has been remarkably predictable.  Like his peer CEOs who take on the new role, he has slashed and burned employment, shut down at least one big business, taken massive write-offs, and undertaken at least one wildly overpriced acquisition (Minecraft) that is supposed to be a game changer for the company.  He apparently picked up the “Turnaround CEO Playbook” after receiving the job and set out on the big tasks!

Yet he still has not put forward a strategy that should encourage investors, employees, customers or suppliers that the company will remain relevant long-term. Amidst all these big tactical actions, it is completely unclear what the strategy is to remain a viable company as customers move, quickly and in droves, to mobile devices using competitive products.

I predicted here in this blog the week Steve Ballmer announced the acquisition of Nokia in September, 2013 that it was “a $7.2B mistake.”  I was off, because in addition to all the losses and restructuring costs Microsoft endured the last 7 quarters, the write off is $7.6B.  Oops.

Why was I so sure it would be a mistake?  Because between 2011 and 2013 Nokia had already lost half its market share.  CEO Elop, who was previously a Microsoft senior executive, had committed Nokia completely to Windows phones, and the results were already catastrophic.  Changing ownership was not going to change the trajectory of Nokia sales.

Microsoft had failed to build any sort of developer community for Windows 8 mobile.  Developers need people holding devices to buy their software.  Nokia had less than 5% share.  Why would any developer build an app for a Windows phone, when almost the entire market was iOS or Android?  In fact, it was clear that developing rev 2, 3, and 4 of an app for the major platforms was far more valuable than even bothering to port an app into Windows 8.

Nokia and Windows 8 had the worst kind of tortuous whirlpool – no users, so no developers, and without new (and actually unique) software there was nothing to attract new users.  Microsoft mobile simply wasn’t even in the game – and had no hope of winning.  It was already clear in June, 2012 that the new Windows tablet – Surface – was being launched with a distinct lack of apps to challenge incumbents Apple Inc. (NASDAQ:AAPL) and Samsung.

By January, 2013 it was also clear that Microsoft was in a huge amount of trouble.  Where just a few years before there were 50 Microsoft-based machines sold for every competitive machine, by 2013 that had shifted to 2 for 1.  People were not buying new PCs, but they were buying mobile devices by the shipload – literally.  And there was no doubt that Windows 8 had missed the mobile market.  Trying too hard to be the old Windows while trying to be something new made the product something few wanted – and certainly not a game changer.

A year ago I wrote that Microsoft has to win the war for developers, or nothing else matters.  When everyone used a PC it seemed that all developers were writing applications for PCs.  But the world shifted.  PC developers still existed, but they were not able to grow sales.  The developers making all the money were the ones writing for iOS and Android.  The growth was all in mobile, and Microsoft had nothing in the game.  Meanwhile, Apple and IBM were joining forces to further displace laptops with iPads in commercial/enterprise uses.

Then we heard Windows 10 would change all of that.  And flocks of people wrote me that a hybrid machine, both PC and tablet, was the tool everyone wanted.  Only we continue to see that the market is wildly indifferent to Windows 10 and hybrids.

Imagine you write with a fountain pen – as most people did 70 years ago.  Then one day you are given a ball point pen.  This is far easier to use, and accomplishes most of what you want.  No, it won’t make the florid lines and majestic sweeps of a fountain pen, but wow it is a whole lot easier and a darn site cheaper.  So you keep the fountain pen for some uses, but mostly start using the ball point pen.

That’s the problem with hybrids of anything – and the hybrid tablet is  no different.  The entrenched sellers of old technology always think a hybrid is a good idea.  But once customers try the new thing, all they want are advancements to the new thing. (Just look at the interest in Tesla cars compared to the stagnant sales of hybrid autos.)

And we’re up to Surface 3 now. When I pointed out in January, 2013 that the markets were rapidly moving away from Microsoft I predicted Surface and Surface Pro would never be important products.  Reader outcry at that time from Microsoft devotees was so great that Forbes editors called me on the carpet and told me I lacked the data to make such a bold prediction.  But I stuck by my guns, we changed some language so it was less blunt, and the article ran.

Two and a half years later and we’re up to rev number Surface 3.  And still, almost nobody is using the product.  Less than 5% market share.  Right again.  It wasn’t a technology prediction, it was a market prediction.  Lacking app developers, and a unique use,  the competition was, and remains, simply too far out front.

Windows 10 is, unfortunately, a very expensive launch.  And to get people to use it Microsoft is giving it away for free.  The hope is then users will hook onto the cloud-based Office 365 and Microsoft’s Azure cloud services.  But this is still trying to milk the same old cow.  This approach relies on people being completely unwilling to give up using Windows and/or Office.  And we see every day that millions of people are finding alternatives they like just fine, thank you very much.

Gamers hated me when I recommended Microsoft should give (for free) xBox to Nintendo.  Unfortunately, I learned few gamers know much about P&Ls.  They all assumed Microsoft made a fortune in gaming.  But anyone who’s ever looked at Microsoft’s financial filings knows that the Entertainment Division, including xBox, has been a giant money-sucking hole.  If they gave it away it would save money, and possibly help leadership figure out a strategy for profitable growth.

Unfortunately, Microsoft bought Minecraft, in effect “doubling down” on the bet.  But regardless of how well anyone likes the products, Microsoft is not making money.  Gaming is a bloody war where Sony and Microsoft keep battling, and keep losing billions of dollars. The odds of ever earning back the $2.5B spent on Minecraft is remote.

The greater likelihood is that as write offs continue to eat away at profits, and as markets continue evolving toward mobile products offered by competitors hurting “core” Microsoft sales, CEO Nadella will eventually have to give up on gaming and undertake another Nokia-like event.

All investors risk looking at current events to drive decision-making.  When Ballmer was sacked and Nadella given the CEO job the stock jumped on euphoria.  But the last 18 months have shown just how bad things are for Microsoft.  It is a near monopolist in a market that is shrinking.  And so far Mr. Nadella has failed to define a strategy that will make Microsoft into a company that does more than try to milk its heritage.

I said the giant retailer Sears Holdings would be a big loser the day Ed Lampert took control of the company.  But hope sprung eternal, and investors jumped on the Sears bandwagon, believing a new CEO would magically improve a worn out, locked-in company.  The stock went up for over 2 years.  But, eventually, it became clear that Sears is irrelevant and the share price increase was unjustified.  And the stock tanked.

Microsoft looks much the same.  The actions we see are attempts to defend & extend a gloried history.  But they don’t add up to a strategy to compete for the future.  HoloLens will not be a product capable of replacing Windows plus Office revenues.  If developers are attracted to it enough to start writing apps.  Cortana is cool, but it is not first.  And competitive products have so much greater usage that developer learning curve gains are wildly faster.  These products are not game changers.  They don’t solve large, unmet needs.

And employees see this.  As I wrote in my last column, it is valuable to listen to employees.  As the bloom fell off the rose, and Nadella started laying people off while freezing pay, employee support of him declined dramatically.  And employee faith in leadership is far lower than at competitors Apple and Google.

As long as Microsoft keeps playing catch up, we should expect more layoffs, cost cutting and asset sales.  And attempts at more “hail Mary” acquisitions intended to change the company.  All of which will do nothing to grow customers, provide better jobs for employees, create value for investors or greater revenue opportunities for suppliers.