Enterprise software producer Oracle Corporation (NYSE:ORCL) is scheduled to report its third fiscal quarter earnings after the close on Tuesday. Investors will be looking for growth after 2nd quarter profits came in flat back in December. 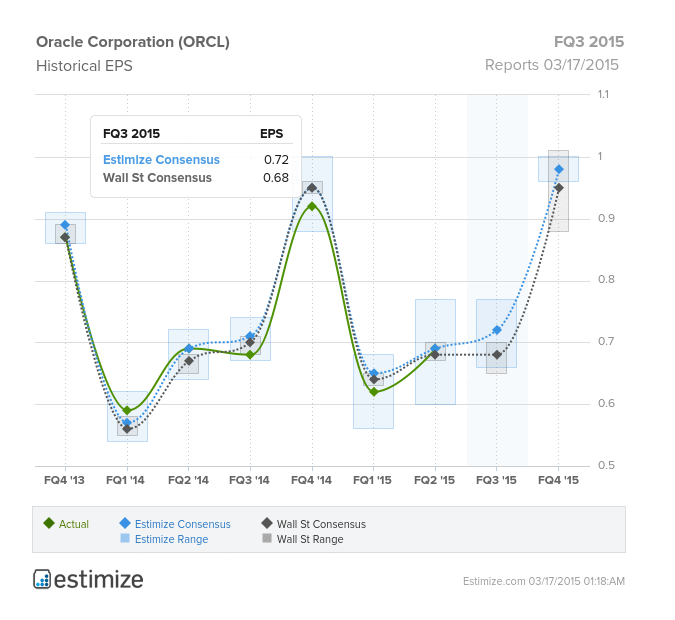 Estimize contributors are predicting that Oracle will report earnings of 72 cents per share. That would be 4 cents better than the Wall Street forecast of 68 cents which matches results from the comparable period of last year.

Logistics giant FedEx Corporation (NYSE:FDX) is set to report fourth quarter earnings Wednesday morning. In January rival UPS guided lower for its holiday period, citing the costs of delivering a high volume of packages on time. FedEx came out and reaffirmed its 2015 guidance, shoring up its investors’ confidence amid uncertainty. 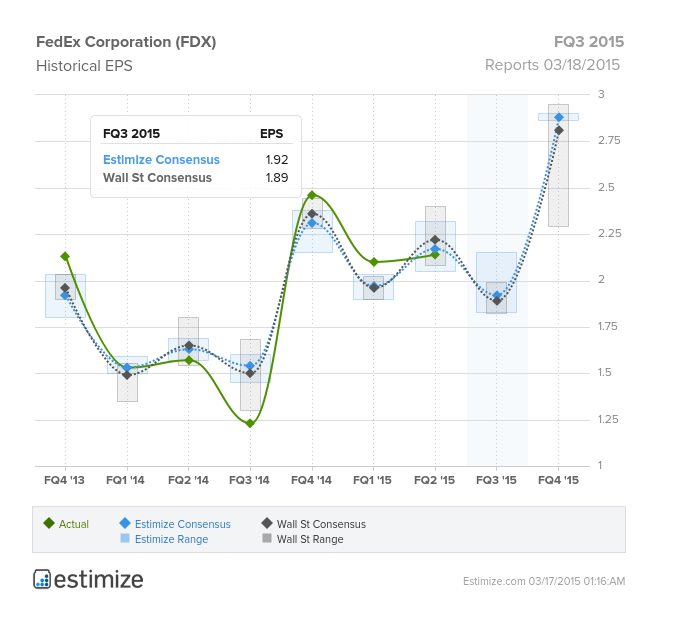 Contributing analysts on Estimize expect FedEx to beat the Wall Street consensus by 3 cents (1.6%) per share. Wall Street is forecasting that FedEx will earn $1.89 in EPS. Meeting either group’s expectation would put the company on track to reach its yearly goal of $8.50 to $9.00 in EPS.

The front of Nike Inc’s (NYSE:NKE) investor relations page tells us that Nike is a growth company. With earnings per share and revenue both increasing steadily over the past two years, the sportswear king has a claim. In its two most recent 3-month periods Nike has posted year over year earnings growth of 27% and 25%. 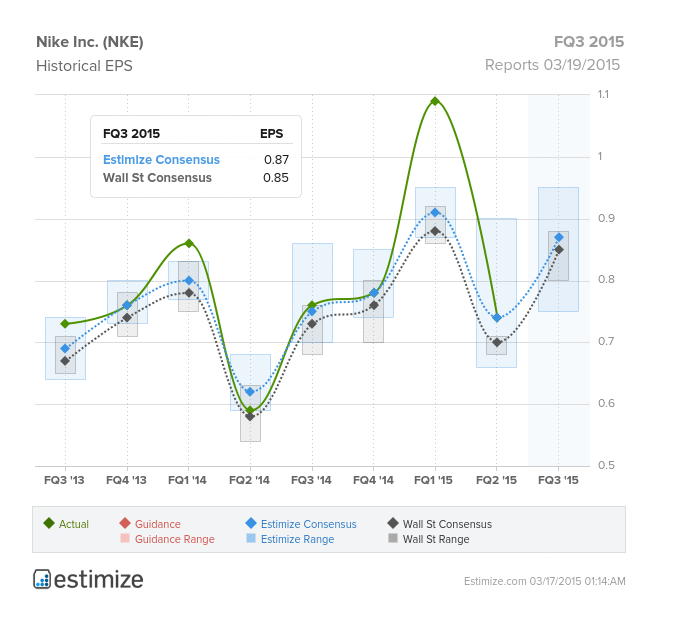 Nike’s competitor Under Armour dove into fitness tracking this quarter with its acquisition of MyFitnessPal and its newly opened digital headquarters in Austin, Tx.

Nike has been on the other side of the fitness tracking spectrum, winding its hardware experiments down. Last year Nike fired the majority of its Fuel Band team and pledged to back out of device production. Under Armour may have loftier ambitions in technology, but Nike’s sportswear continues to sell phenomenally well around the globe. Analysts on Estimize are looking for a 16% increase to the bottom line Thursday and a 10% boost to total sales.

There have been some major shakeups this year to the parent company of Olive Garden. The changes at Darden Restaurants, Inc. (NYSE:DRI) come after a period of sustained pressure from activist investment fund Starboard Value.

Last summer longtime CEO Clarence Otis stepped down from Darden’s top post, satisfying one demand from Starboard’s lengthy list. Starboard has been critical of Darden’s cost saving measures and replaced the entire board of directors after winning a nearly year-long battle back in October. Now that Starboard’s Jeff Smith has his way, we’ll see if he Starboard can pare down costs as much as the firm claimed it would. 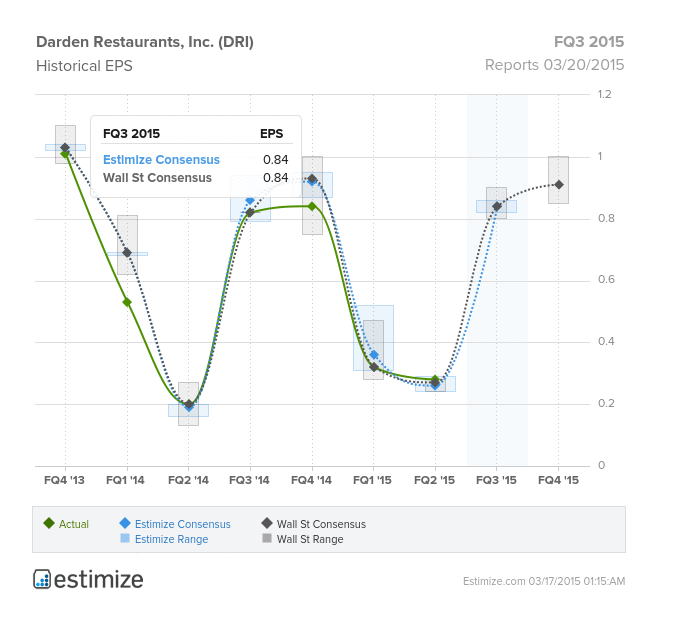 The Estimize community is expecting Darden’s revenue to come in slightly below the Wall Street consensus while earnings per share remain in-line with Wall Street’s estimate.

In January Tiffany & Co. (NYSE:TIF) released preliminary holiday period sales, warning investors of a slow quarter. Asia-Pacific region sales were a bright spot, increasing 7% despite a 16% drop in Japan in part due to the country’s high consumption tax. Revenues in Tiffany’s largest market, the US, fell 1%. 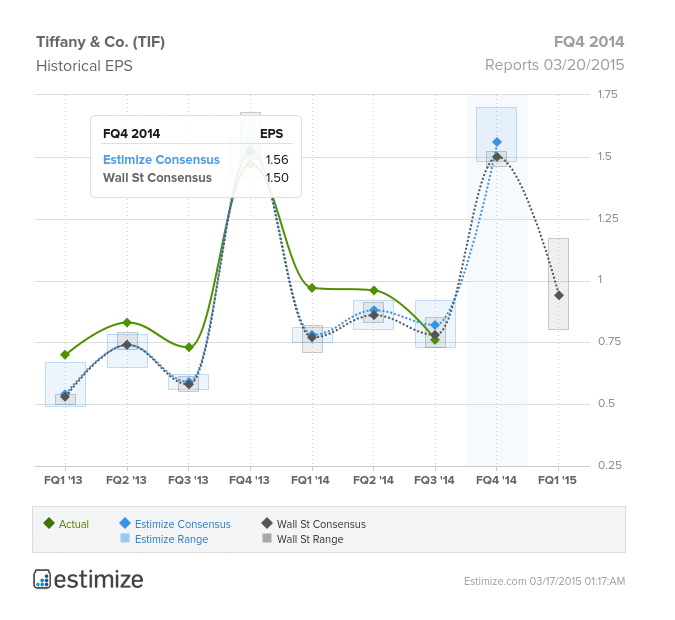 Tiffany’s reported $1.02 billion in global sales for the 2 month period ending on December 31. That’s down 1% from their holiday sales last year. Estimize contributors are setting their sights high for Tiffany’s expecting the luxury company to tack on an additional $342 million in sales during January bringing total quarterly revenue to $1.344 billion, a 3.5% improvement compared to last year.