The Estimize consensus calls for EPS of $0.98, in-line with Wall Street, but one penny below corporate guidance. Revenues are nearly in-line at $117.64. 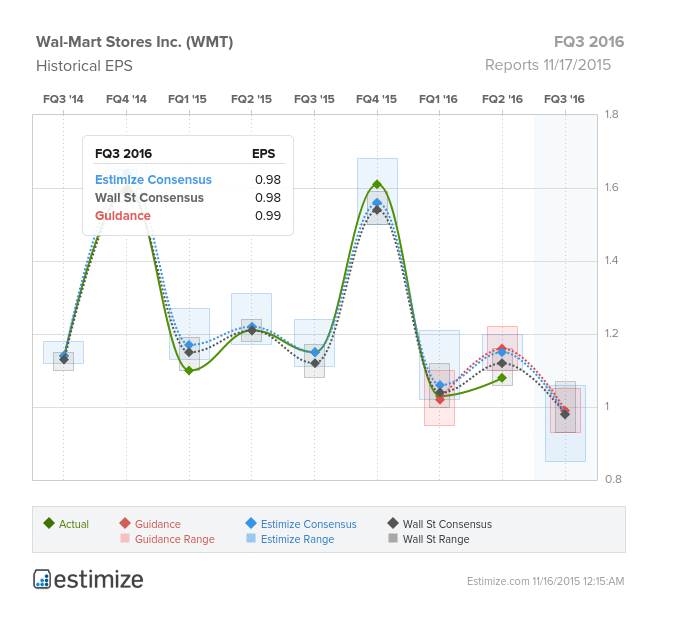 What to expect: On October 14th the world’s largest retailer announced that full-year sales would be flat, a drop in what was previously expected. The company blamed the decrease in guidance on the strong U.S. dollar and increases in costs such as employee wages. Wal-Mart announced in February that they were raising their entry wage to $9 an hour, and that by February 2016 all employees would earn at least $10/hour. In the wake of the announcement on lower guidance, the stock plunged 10% to a three year low as investors became leery of the excuses given by the retailer. Competition from Amazon has become almost too much for Wal-Mart to bear, and as such they are planning to funnel over $1B into ecommerce and digital platforms next year in order to combat sluggish sales and slowing traffic. Wal-Mart began offering an unlimited shipping membership for $50 annually, but does not offer the other perks of Amazon Prime. Since the October 14th announcement, Estimize EPS expectations for fiscal Q3 2016 have dropped 3 cents and revenues are down $553M.

The Estimize community is looking for EPS of $0.72, only a penny better than the Wall Street consensus, but a penny behind corporate guidance. Revenues of $1.023B are actually behind the Street’s $1.030B. 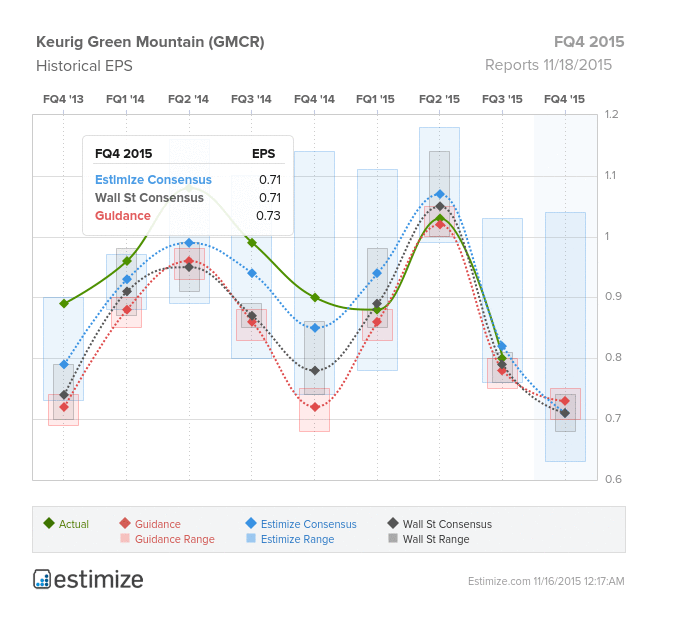 What to watch: Keurig Green Mountain has reported three consecutive quarters of missed earnings and revenue results due to lower sales in the portion pack category this year. The new Keurig 2.0 brewer that launched a year ago was not received well due to the high price-point, and only works with licensed K-cup pods, not other brands as previous models did. While GMCR still remains dominant in the single brew category, it is losing market share to the likes of Starbucks and Kraft. As a result, the company has made several strategic partnerships this year with the likes of Laughing Man Coffee, and in the past year with Target’s Archer Farms brand, BJ’s Wellsley Farms brand and Nestle, and earlier this year expanded partnership with Dunkin’ Brands and J.M. Smucker. The company was hoping it’s newest product, Keurig KOLD, would help regain sales, but it was not as well-received by the public as hoped. Complaints around the first iteration of KOLD ranged from the machine being too large and loud, taking too long to cool down, pods that don’t always work, and flavors that are off. As a result the stock is down 67% this year. 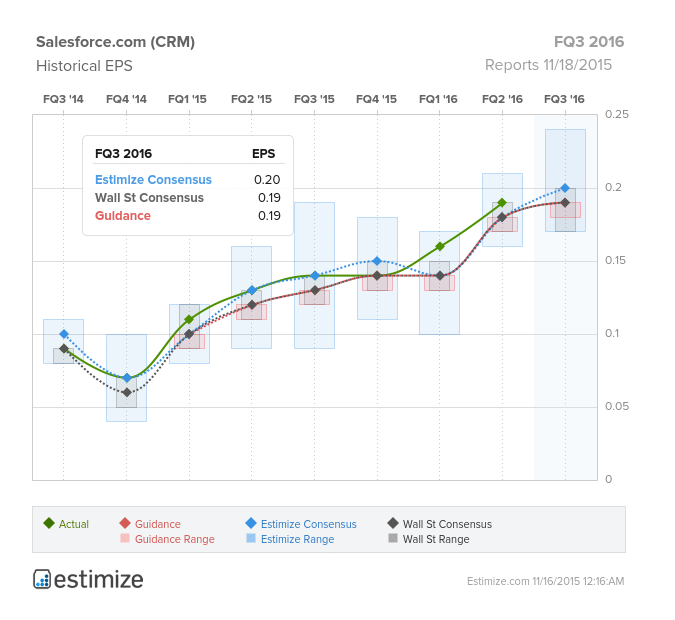 What to watch: Salesforce continues to show solid growth in the cloud space despite its maturity. This year, CRM has been on a spending spree, however, heavily investing in new data centers and digital marketing efforts and covering costs related to international expansion and headwinds from currency fluctuations, all impacting gross margins and the bottom-line. The third quarter is expected to benefit from the success of popular products such as Salesforce ExactTarget Marketing Cloud platform and the recently launched Salesforce 1 Customer Platform. Salesforce is also making a play for social, launching a new set of tools in Q2 to help marketers engage with customers on Instagram by using their suite of Marketing Cloud products. The most important number to watch for is Salesforce’s is their backlog of booked business which stood at $9.2 billion as of the August quarter, a 26% growth rate YoY. Being a pioneer in the cloud space means that Salesforce trades at a premium, with a forward P/E of 104, much higher than competitors. 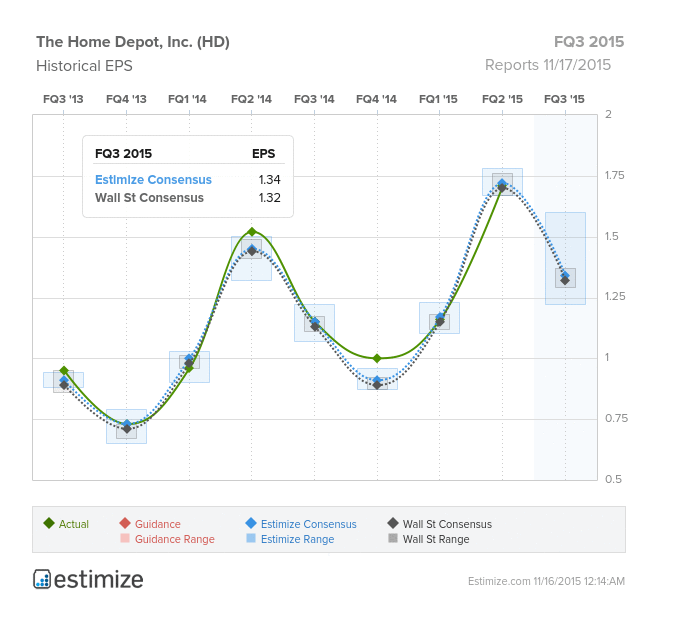 What to watch: This week we get a further read on the health of the US consumer and their willingness to make large ticket purchases for their homes. The housing sector performed well throughout the third quarter, however New Home Sales fell in September. Homebuilders such as D.R. Horton released better than expected results last week, also boding well for the home improvement retailers. While consumers have more money in their pockets due to an improving jobs situation and lower oil prices, they have been very choosy with how they allocate their discretionary income. Home prices remain high, and as prices appreciate consumers typically invest in their properties. During the first half of the year, Home Depot reported solid same store sales of 6%, as well as increased customer traffic and average guest spend. The home improvement retailer continues to steal market share from it’s main competitor, Lowe’s, which is still dealing with negative headlines from carrying Chinese laminate flooring that contained formaldehyde, a possible carcinogen. Home Depot also only has domestic locations, while Lowe’s has stores in Mexico and Canada and could suffer from the stronger dollar.

The Estimize consensus calls for EPS of $0.47, only a penny higher than what the Street is expecting. Revenue expectations are roughly in-line $1.67B. 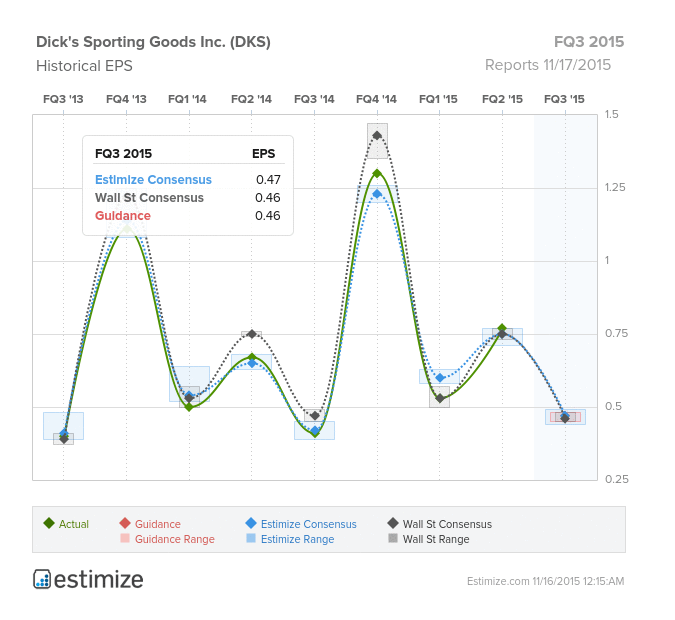 What to watch: The massive trend towards athletic wear this year has been a boon for Dick’s. Categories such as women’s athletic wear and basketball shoes continue to drive sales, with brands such as Nike and Under Armour, both sold in stores, also reporting impressive numbers this quarter. Dick’s Sporting Goods remains Under Armour’s most important customer and thus should not be affected by any trend of Under Armour bypassing large retail stores in selling their products. Dick’s should benefit from its in-store action and online growth strategies as the company aggressively enhances its ecommerce capabilities to increase sales as well as market share in online retailing. The company’s in-store remodeling efforts, launch of shop-in-shop facilities and recruitment of competent sales personnel have continually boosted its top-line in 2015. Golf Galaxy still remains Dick’s weakest link, with same store sales decreasing 2.9% last quarter, leading to lower overall SSS of 1.5%. The company has raised its outlook for 2015 with EPS guidance of $0.45 – $0.48 for the third quarter, and SSS growth of 1 – 3%.