At the end of last year, I highlighted 5 graphs to watch in 2015. Now that we have all of the February reports, let's take another look.

After a mini-surge at the end of January (light brown in the graph below), The Mortgage Bankers Association reported that refinancing applications fell back to somnolence during February, due to higher interest rates (blue) Mortgage News Daily has the graph: 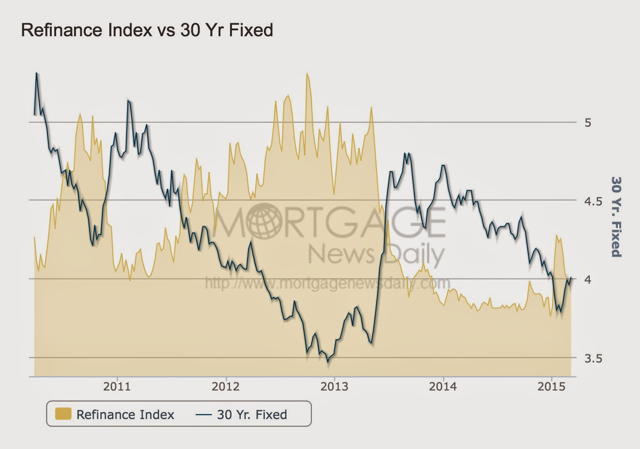 Over the last 35 years, refinancing debt at lower rates has been an important middle/working class strategy. There is little room left for that strategy. David Stockman had an interesting graph last week showing that in this expansion, wage growth and consumer spending have been almost perfectly correlated. If mortgage refinancing stays turned off too long, and wages don't grow in real terms, then consumer spending falters and so does the economy.

Here is a graph of gas prices (blue, inverted and averaged quarterly) compared with real GDP (red) over the last 10 years: 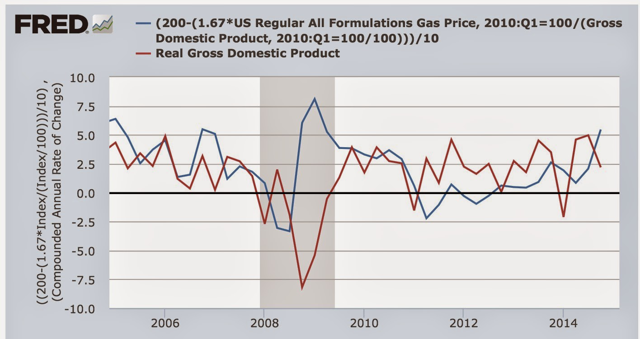 Once gas prices reach a critical point, roughly $4 a gallon in present real terms, GDP falters. The cheaper gas prices are from that point, the more GDP can be expected to rise, with a slight lag. In February, gas prices rebounded as expected over $0.30 from their late January bottom. This is a typical seasonal increase and so is a neutral. All else being equal, by the 2nd quarter, this should be reflected in more positive real GDP.

This is a graph of part time workers for economic reasons expressed as a percentage of the labor force: 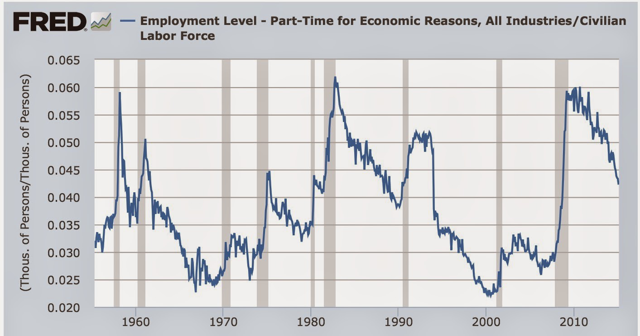 #2 Not in Labor force but want a job now: 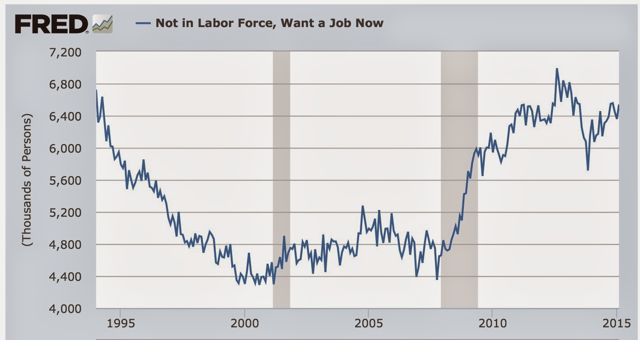 This moved in the wrong direction in February. It is now about 900,000 above its post-recession low of November 2013 (just prior to Congress's cutoff of extended unemployment benefits) and some 1.9 million above its 1999 and 2007 lows.

After an anomalous decline in average hourly wages in December, and a big positive reversal in January, wages for nonsupervisory workers were totally flat in February. Nominal wage growth YoY has now declined back to its post-recession low. 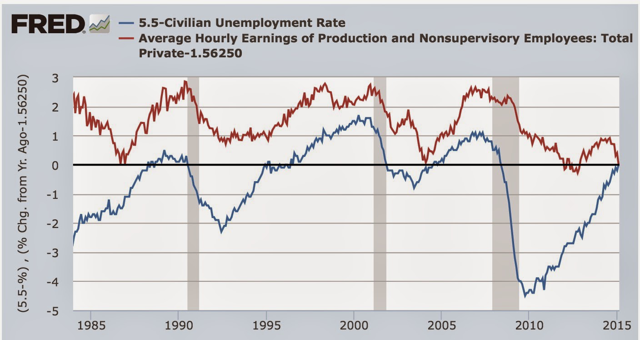 The decline in the last 6 months is troubling.

Compare our present expansion with the previous three. In the 1980s and 2000s, by the time we improved to 5.5% unemployment, nominal wage growth was approaching 3% YoY. In the 1990s expansion, at worst wage growth was on the cusp of acceleration, but was nevertheless 3.5%. Unless wage growth starts to accelerate now, the pattern is not holding.

There have been a few interesting notes about the lack of wage growth. The staff of the Federal Reserve has done a study indicating that the number of long-term unemployed plays an important role (since presumably these people are more desperate). It has also been suggested that the disproportionate (compared to normal times) percentage of relatively highly paid employees (Boomers) retiring from the labor force, and being replaced by younger workers, is holding down wages.

Two months of data into the year shows two series positive (gas prices, involuntary part time employment), and no or little improvement in the other three (refinancing, discouraged dropouts from the labor force, and nominal wage growth). Should wage growth not improve, and mortgage refinancing remain dormant, we are going to run into trouble, and I will be looking for other long leading indicators to start rolling over.