Nearly 10 years ago, Steve Jobs took the stage at an Apple Inc. (NASDAQ:AAPL) keynote event to introduce the first smartphone designed and built by the company. Little did he know that what he unveiled that day would grow to become the most popular consumer electronics product of all time.

Its popularity lifted financial performance to new heights for the next decade, making Apple the most profitable company in the world.

But the success of the iPhone doesn’t solely revolve around Apple. In fact, many of its chip suppliers were put on the map as a result of the smartphone. These chipmakers heavily rely on iPhone sales, perhaps to a fault, to carry earnings growth on a quarterly basis.

The recent downturn consequently put a damper on sales metrics for Skyworks Solutions, Qorvo and Cirrus Logic while larger suppliers like Broadcom and Qualcomm effectively weathered the storm. With earnings season almost fully underway, Apple phone sales will once again come into focus.

More often than not, the chip companies provide a fairly clear signal of how phone sales will fare. 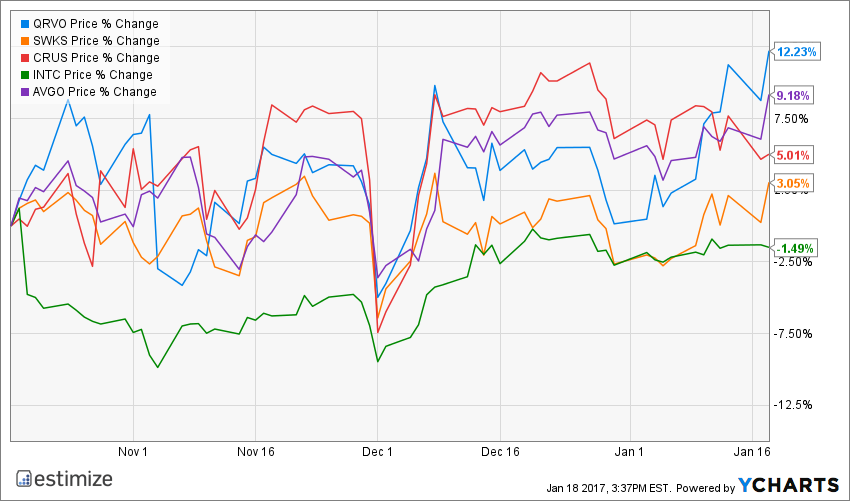 Broadcom’s exposure to Apple dropped considerably after agreeing to merge with Avago Technologies in mid 2015. The merged entity now generates about 15% of total revenue from Apple with exposure to China handsets, data centers, broadband and wireless jumping higher. Greater diversification helped offset any headwinds created by weak iPhone sales over the past year and a half. In fact, Broadcom delivered better than expected earnings and in line revenue for over 2 years and counting.

Analysts at Estimize believe the company’s growing exposure to new technologies will drive financial performance moving forward. The consensus data is looking for $3.49 per share on the bottom line on $4.09 billion in revenue for the fiscal first quarter. This reflects a 37% increase in earnings with a 125% jump in sales from a year earlier.

Skyworks kicks off its fiscal 2017 by looking beyond its two major customers, Apple and Samsung, to drive quarterly results. Moving ahead, the company will be looking to Internet of Things to complement its growing presence in mobile. Its latest IoT application released last week provides additional support to a leg of the company that makes up 25% of total revenue. Whether its autonomous vehicles, smart homes, or routers, Skyworks plays an important role as long as mobile connectivity is involved.

That said, earnings prospects remained relatively muted ahead of earnings season. The Estimize consensus is calling for $1.60 on the bottom line, about compared to the same period last year. Revenue for the period is forecasted to drop by 3% to $905.40 million, reflecting a slight improvement from the previous quarter.

Intel recently won a significant portion of Apple’s modem chip business for the newest iPhone 7 but that didn’t come without controversy. Following the release of the phone many customers complained that Intel’s chip lagged in performance compared to previous provider Qualcomm. The performance tests put the newly founded relationship in question, but recent news out of the Intel camp put those concerns to rest. At the annual Consumer Electronic Show this year Intel unveiled its first modem chip for smartphones that uses 5G technology. The new modem won’t actually reach smartphones users until 2018 at the earliest but many reports suggest that progress has outpaced Qualcomm.

Beyond the push in mobile, Intel remains committed to expanding in automobiles, Internet of Things and other higher growth technologies while maintaining its dominance in CPU processors. For the upcoming quarter to be reported analysts at Estimize expect Intel to continue its winning streak, calling for a 4% increase on the bottom line and 6% on the top.

Qorvo’s over-reliance on Apple iPhone’s puts investors in a precarious position heading into earnings season. The new iPhone 7 came out of the gates hot, but new reports claim that sales were not as good as previously expected. As demand for the phone continues to fall, don’t expect to see QRVO sales surge in the fourth quarter. Fortunately, like other Apple chipmakers, the company positioned itself into many other high growth markets such as 5G technology and Internet of Things. Revisions activity for the fourth quarter continue to edge down, making the stock’s historical 5% decline during earnings season a realistic possibility.

Shares of audio processor specialist, Cirrus Logic, doubled in value in 2016 despite a host of troubles concerning iPhone sales.  Apple is hands down Cirrus’s largest customer and currently accounts for two thirds of the company’s total revenue. This number is down from previous years which is when Apple made up nearly 80% of revenue. Despite the phone’s troubles, Cirrus Logic continues to crush analyst’s estimates, showing the most promise of Apple’s suppliers. Analyst’s at Estimize are calling for earnings per share of $1.64 on $497.71 million in revenue, reflecting an 85% increase on the bottom line and 38% on the top.