The Estimize consensus is looking for earnings of $4.88 per share on $7.57 billion in revenue, 12 cents higher than Wall Street on the bottom line and $127 million above on the top. Compared to a year earlier, earnings are expected to increase 1% with revenue jumping 4%. EPS estimates have been pushed up by 13% since the last quarterly report, and revenue estimates have come up 1%. 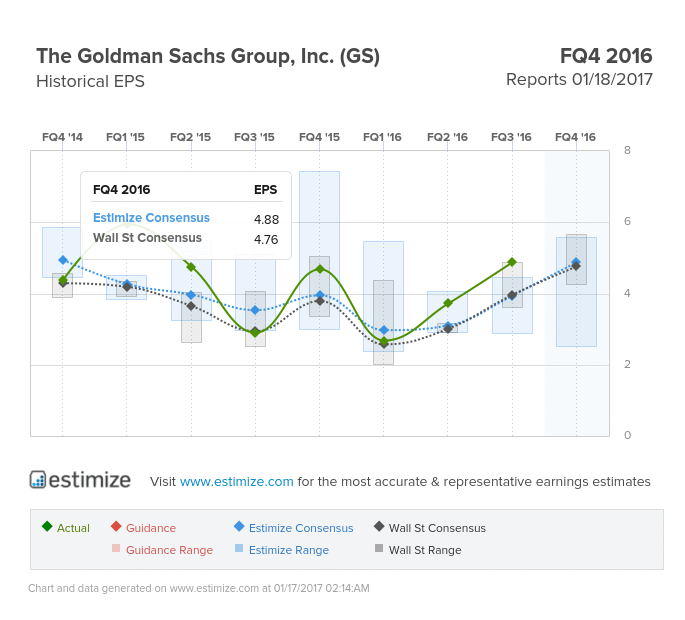 What to Watch: Goldman Sach’s post election rally which now looks overdone sets up for a large sell off if results fall short of target estimates. Analysts at Estimize expect Goldman to record $4.80 per share, reflecting a 1% decline from a year earlier. However, that estimate increased by about 12% in the past 3 months to a point where positive comps aren’t out of the question. Revenue for the period is forecasted to increase by 3% to $7.51 billion, marking two consecutive quarters of positive growth.

Being an investment bank, the volatility created after the election bodes well for Goldman Sachs trading business. Equity sales should see the biggest upside from the volatile environment while general market improvements advances fixed income and currency revenue. Meanwhile M&A activity and debt underwriting made a significant jump in 2016 that will support top line expansion.

The stars seem aligned for the banking giant’s upcoming report but any sign of weakness will undoubtedly push shares lower. Goldman’s vast exposure to international markets makes it prone to currency headwinds and macroeconomic uncertainty, especially in Europe.

The Estimize consensus calls for EPS of $0.15, 2 cents above the Wall Street consensus. Revenue expectations of $2.469 billion are $6M above the sell-side consensus. Expectations have increased 43% since last quarter, putting YoY growth expectations at 100% for EPS and 35% for sales. 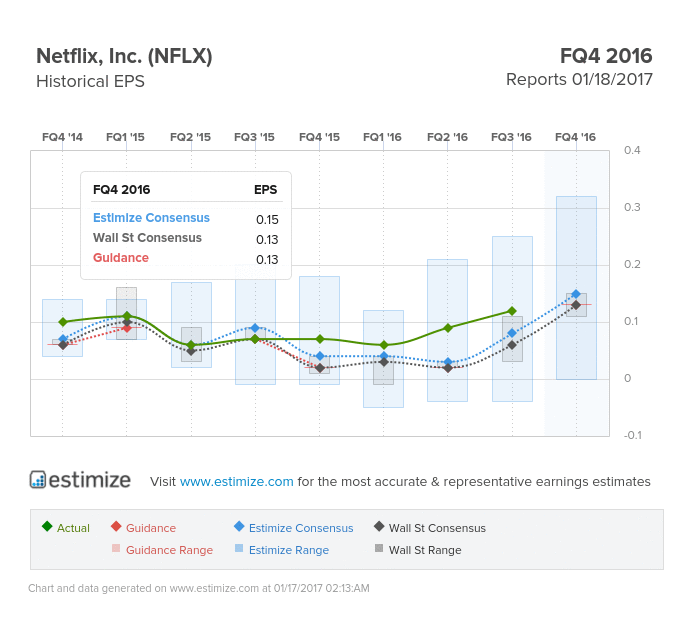 To increase growth and appeal to wider audience, Netflix continues to introduce new original programming. Its most recent series, the Crown, took home a number of awards at this year’s Golden Globes, the most notable being “Best Drama TV Series”. The company plans to increase its hours of original programming to 1,000 in 2017, but this comes at a cost. As content costs continue to rise ($6 billion this year), it won’t be surprising to see a another price hike implemented.

Meanwhile, Netflix faces additional pressure from Amazon’s recent push to expand its offerings and original content. Apple also announced it would launch original TV shows to challenge Netflix and Amazon’s dominance. It was previously rumored that Apple might be in the market to purchase Netflix and that could very well still be true if its new efforts fall flat. Netflix is likely to be at the center of takeover rumors this year regardless of financial performance.

The Estimize consensus is looking for earnings per share of $0.71, five cents above the sell-side consensus and 62% higher than the same period a year earlier. That estimate has increased 17% since Morgan Stanley’s last quarterly report. Revenue is anticipated to increase 9% to $8.596 billion, $103M above Wall Street. 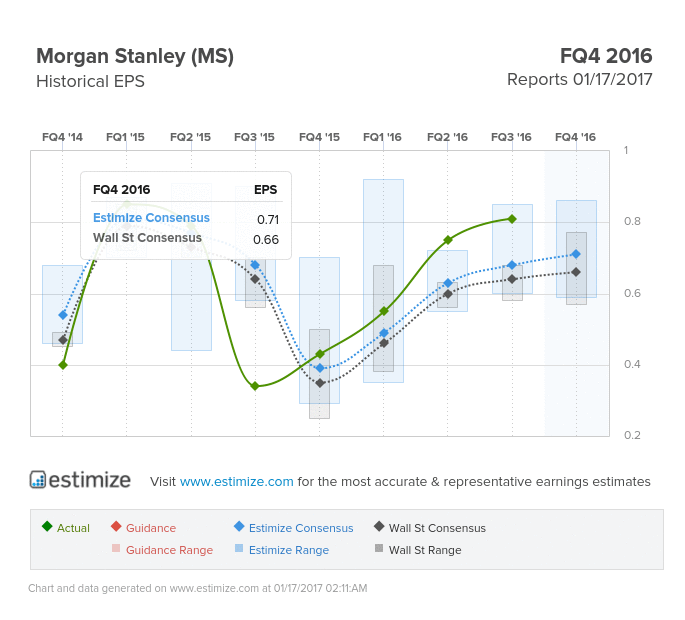 What to Watch: The general consensus is that president-elect Trump’s intent to repeal parts of Dodd Frank coupled with the notion of multiple rate hikes throughout 2017 will help Wall Street’s biggest banks. Investment banks, like MS should see the biggest boost from greater trading revenue associated with higher volatility, improving M&A activity and the possibility of more IPOs in 2017.

Morgan Stanley currently derives a majority of its revenue from two major businesses; Institutional Securities, broken down into advisory, equity sales and trading and fixed income, and Wealth Management. In the third quarter overall Institutional Securities generated $4.6 billion in revenue, up from $3.9 billion a year earlier. A majority of these gains came from fixed income sales and trading which jumped from $583 million to $1.9 billion. Revenue from Wealth Management services, on the other hand, grew by $300 million to $3.9 billion coming from increases in net interest income and transactional revenues.

While Morgan Stanley is looking pretty good, there remains a couple of near term headwinds that could hamper growth. The strength of the U.S. dollar along with greater macroeconomic uncertainty put pressure on Morgan Stanley’s vast international operation. These issues only appear to be worsening amidst a shifting geopolitical landscape.

Information Technology – IT Services | Reports January 19, after the close.

The Estimize consensus is looking for earnings per share of $4.93 on $21.716 billion in revenue, above Wall Street by 2 cents on the bottom-line and $52M on the top. Compared to a year earlier, this reflects a 1% increase in earnings and a 2% decrease on  sales. Earnings estimates have decreased by 1% since the last quarter, while revenues have remained flat. 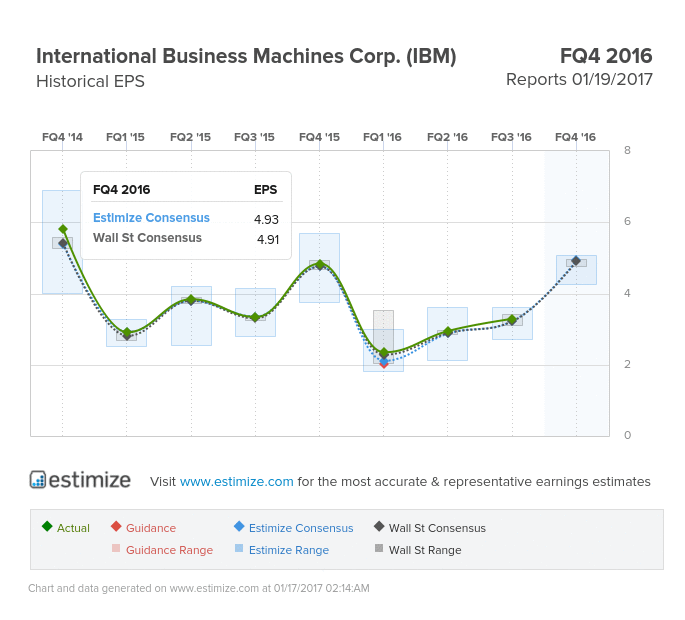 What to Watch: IBM maintains its streak of 10 consecutive quarters of negative growth on the top and bottom line. This comes amidst a steady downturn in the PC market, currency headwinds and weak IT spending. Meanwhile, IBM continues to focus on the cloud to offset any losses from its legacy business. But this transition puts pressure on overall growth as cloud sectors slowly gain steam.

Stagnant revisions activity over the last 3 months suggest more trouble looms heading into the fourth quarter. Additional competition in high growth markets from Amazon, Microsoft and Google also pose a threat to growth prospects moving forward. The increasing number of factors working against IBM continue to bode favorably for investors ahead of earnings season. It won’t be surprising if IBM fails to post positive growth in Q4 and shares decline by its historical average of 3% or more.