It’s a light week with the holiday season approaching, but these four S&P 500 names are still reporting their latest quarterly results!

Similar to last quarter, we head into Paychex’s report with both Estimize and Wall Street expecting EPS of $0.51. Revenues estimates from the Estimize community are only slightly higher at $726.2M as compared to the Street’s $724.2M. 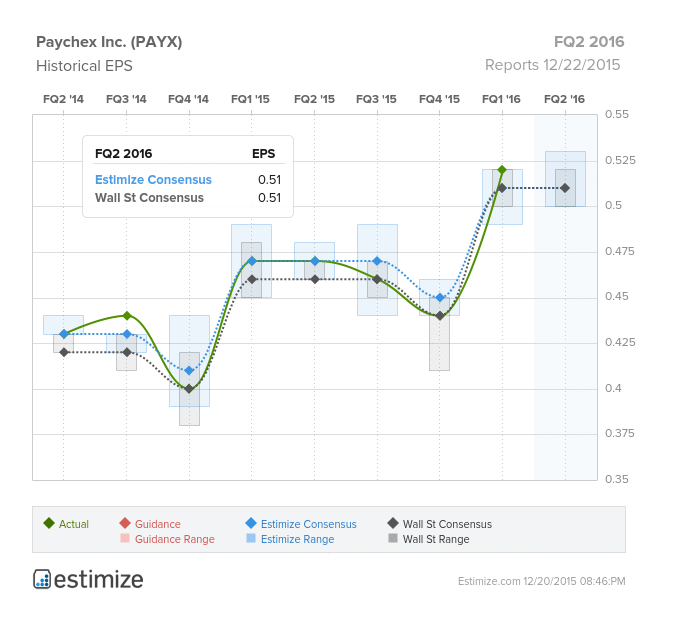 What to watch: Paychex is a provider of payroll and human resource solutions and is often seen as a proxy for the health of small and mid-sized businesses as those are their biggest customers. Small businesses make up 95% of all US businesses, and the road back from the great recession has been rough, with growth trends still slow but gradually improving. A stronger labor market has no doubt helped the company as has their move into cloud-based solutions. The success of their services that help clients understand the Patient Protection and Affordable Care Act should also give a boost to quarterly earnings. However, massive competition still remains from smaller, cloud-based applications such as those offered by Trinet and Zenefits. Another headwind could be interest rates which are now above zero for the first time since 2008. The impact rate tightening has on small businesses could negatively affect Paychex’s sales.

The Estimize consensus calls for EPS of $0.59, in-line with Wall Street. However, the Estimize community is expecting slightly higher revenues of $3.42B as compared to the Street’s $3.39B. 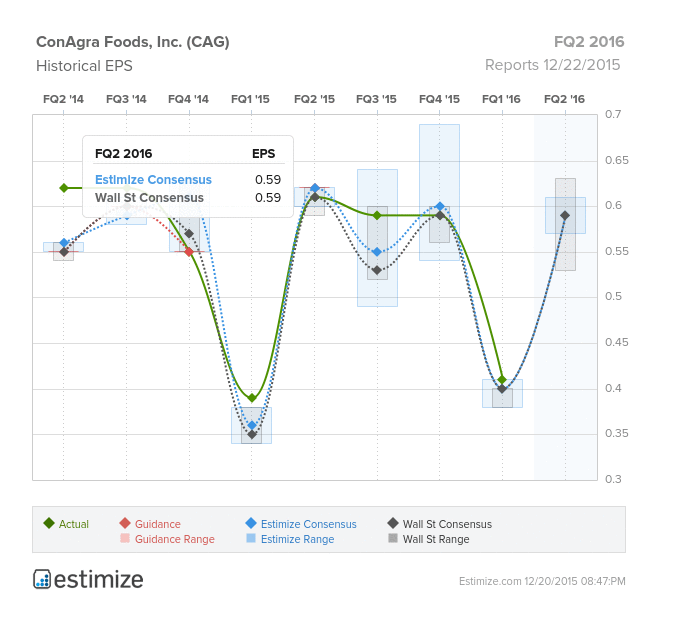 What to watch: Earlier in the year ConAgra faced issues with their product mix and as a result has been taking actions to streamline their portfolio of offerings, especially as products such as cereals and snacks have begun to wane in popularity. Like many of their competitors, ConAgra is introducing new products, typically in the natural and organic food categories in order to keep up with customer demand for healthier options.The food products company has also been focused on reducing expenses and diversifying their mix of prices to drive profits. General Mills has been undertaking similar cost cutting endeavors, including a large workforce reduction, but the benefits of those efforts haven’t been seen yet as the company missed estimates both on the top and bottom-line when they reported last week. ConAgra’s stock has done markedly better than General Mill’s in 2015, up 12% YTD as compared to 5% for GIS. 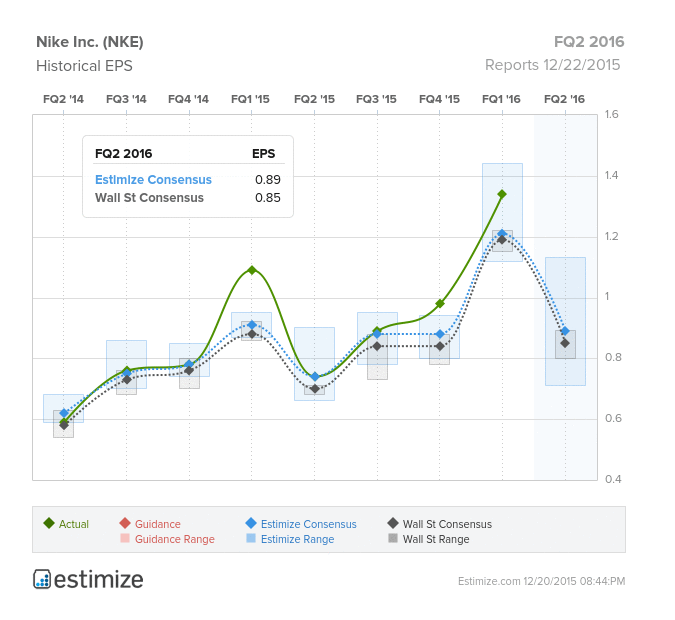 What to watch: Despite its size and market share, Nike still manages to post above average growth rates, driven by a strong global reach, ongoing product innovation and an expanding direct to consumer (DTC) business. International markets have consistently generated more than half of all Nike’s sales in any year. While many American companies have suffered in 2015 due to the strong U.S., robust demand for Nike’s products have helped them overcome any currency headwinds. Global margins remain unaffected, offset by rising average shoe prices, Nike’s direct to consumer strategy and greater operational efficiencies. In China, Nike is expected to revitalize growth supported by a greater demand for active wear. Despite China’s economic woes, Nike has performed remarkably well and saw revenue increase 30% last quarter. That being said, Nike also expects to remain strong in Europe amidst a deceleration in soccer sales. Key sectors such as running, cross-training and basketball are expected to keep the company modest as they amplify their direct to consumer and merchandising. Given how well Nike performs on the global stage, the upcoming Eurocup and summer Olympics will help propel the company amid concerns of slowing growth.

The Estimize consensus calls for EPS of $0.32, much higher than Wall Street’s estimate of $0.23. Revenues are expected to come in at $3.63B above the Street’s estimate of $3.49B. Micron has provided revenue guidance for the past quarters, but has ceased to do so for FQ1 2016, perhaps because they missed expectations in each of those quarters. 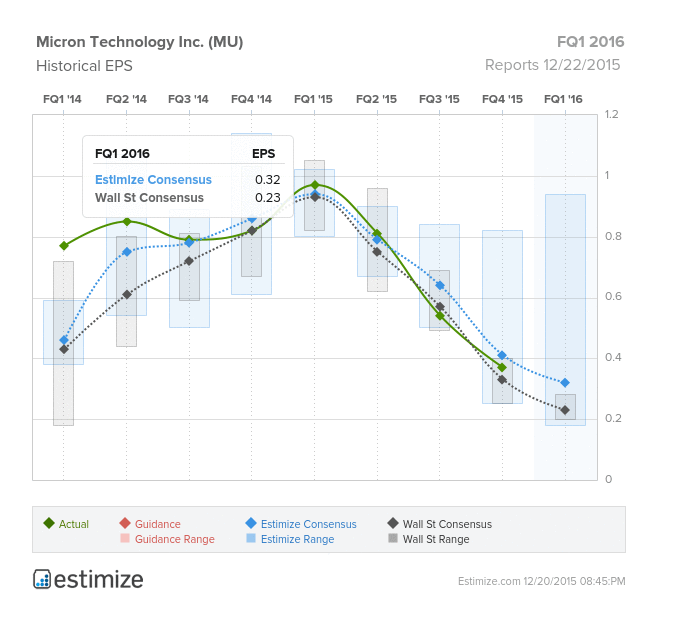 What to watch: Semiconductors have struggled this year with the strength of the US dollar and the freefall of the PC market eating into the bottom-line. However, Micron was surprisingly able to keep EPS figures afloat in the first and second quarter of their fiscal 2015, a trend that all came crashing down in the second half of the year. Both the top and bottom-line recorded substantial misses in Q3 and Q4, and YoY growth was negative. Competitors such as Intel and SanDisk also posted big misses in the second calendar quarter, but were able to rebound in CQ3. Micron has done a monstrously poor job in the past with its Japanese yen hedging, and after lacking an official CFO in the beginning of the year, appointed Ernie Maddock to the position in May to lead the charge on protecting foreign sales from currency swings. While the strength of the US dollar remains a concern, as does the decline in PC sales. Micron remains very exposed to PCs as DRAM is its largest business with about 70% of the consolidated revenue, and PC is about 35% of that. Micron’s largest market on the NAND side is also PC centric, it supplies 20-30% of those bits to its consumer solid state drives. Year-to-date the stock is down 60%.