One of them is 3M (MMM). It has increased its dividend for an amazing 58 consecutive years.

You can see the entire list of Dividend Aristocrats by clicking here.

General Electric Company (NYSE:GE) does not make the list of Dividend Aristocrats. Investors likely recall GE cut its dividend by 67% in 2009, during the heart of the Great Recession.

3M has paid dividends consistently for the past century. Its superior dividend track record is one of four key reasons why I prefer 3M stock over GE stock.

On average, 3M has increased its dividend at more than double GE’s dividend growth rate over the past five years. The difference in their dividend growth histories is the biggest reason why 3M is a stronger choice.

It has proven the ability to keep its dividend intact, even during recessions. GE has not had this ability. While GE has modestly increased its dividend since the 2009 cut, the dividend has still not recovered to its pre-financial crisis level.

Investors are likely to generate a much higher yield on cost by buying 3M rather than GE.

If both stocks continue their five-year average dividend growth rates over the next decade, 3M investors will generate a 10% yield on cost.

At the same time, GE investors would generate a 5.9% yield on cost after 10 years.

Next, one of the risk factors facing the industrials sector right now is the deterioration of their oil and gas businesses.

This is a competitive advantage for 3M. It has modest exposure to the oil and gas industry. It operates across several different segments, and generates high margins in each.

Many industrial manufacturers are suffering sharp declines in revenue because of their exposure to the oil and gas industry. 3M does service the energy industry, but to a much lesser extent than GE.

Oil and gas revenue comprised 14% of GE’s industrial revenue in 2015. This business has been hit hard by the decline in commodity prices. Over the first three quarters of 2016, GE’s oil and gas revenue declined 21%.

This is having a pronounced effect on GE. 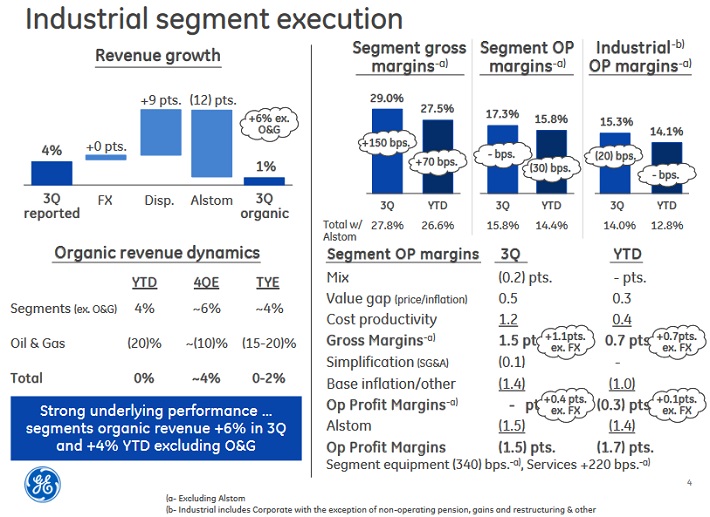 3M’s energy-related declines are much milder. Currency-neutral revenue from the energy segment declined just 1.5% in 2015. Through the first three quarters of 2016, energy revenue is down 9.6%.

This has allowed 3M to avoid the carnage in the industrial sector, brought on by the collapse in oil and gas prices over the past two years. 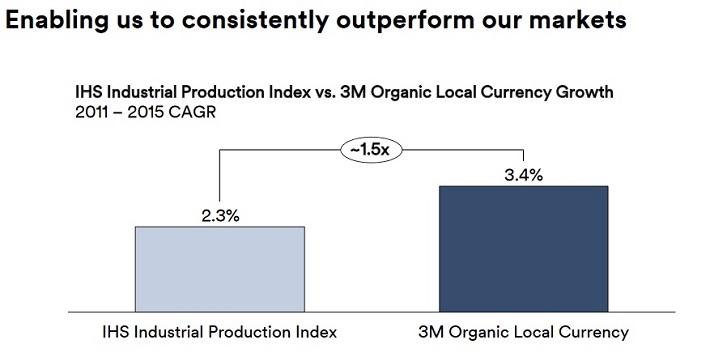 To be sure, GE has a strong business as well, in many aspects. However, GE’s oil and gas business is large enough to offset the growth it is seeing across its other businesses.

Over the first nine months of 2016, 3M has increased operating profit by 2%. In the same period, GE’s industrial operating profit has declined 6%, due largely to the decline on the oil and gas side of the business.

Another reason to prefer 3M is that it has much more manageable pension liabilities than GE.

3M incurred $556 million in total consolidated defined benefit pre-tax pension and postretirement expense in 2015. The good news for shareholders is that management expects this expense to decline to $236 million in 2016.

As of the end of 2015, 3M had $3.5 billion of pension and post-retirement benefit liabilities on its balance sheet.

This is something investors should keep an eye on going forward. 3M closed its pension program to employees in 2009. This gave the company time to more fully fund its existing liabilities.

It is likely GE will have to spend billions per year on its pension and other retirement costs. This could continue to weigh on its dividend growth going forward.

Shares of GE are slightly more expensive than the S&P 500, which has a price-to-earnings ratio of 26. On the other hand, 3M is valued at a slight discount.

Considering 3M’s significantly better growth prospects, one could argue that it represents a better value than GE. There could be room for 3M’s price-to-earnings multiple to expand from the present level, which would increase shareholder returns.

GE stock is not likely to see further expansion of the price-to-earnings ratio, since its earnings are declining. Absent a significant recovery in oil and gas prices, GE’s fundamentals could continue to struggle in 2017.

As a result, 3M should be viewed as the better dividend growth stock between the two.