The rise of social media platform Facebook Inc (NASDAQ:FB) has been nothing short of astonishing. The stock has doubled in just the past three years. It has already claimed a market capitalization of nearly $400 billion, despite the fact it only went public five years ago. That said, whether the stock is a good investment today is a different question entirely.

Facebook has had an amazing run so far. But for income investors, the choice is clear: Microsoft Corporation (NASDAQ:MSFT) is a better stock to buy.

Microsoft is a Dividend Achiever, a group of 272 stocks with 10+ years of consecutive dividend increases.

Let’s take a closer look at the top 4 reasons why I’d own Microsoft rather than Facebook:

Microsoft’s core products- specifically, software like Office, Windows, and cloud-based 365 and Azure- are very ‘sticky.’ Consumers need this software, both at work and at home, to conduct their daily lives.

Microsoft has evolved along with changes in how consumers perform work tasks. For example, it has built a large business segment devoted to the Intelligent Cloud. 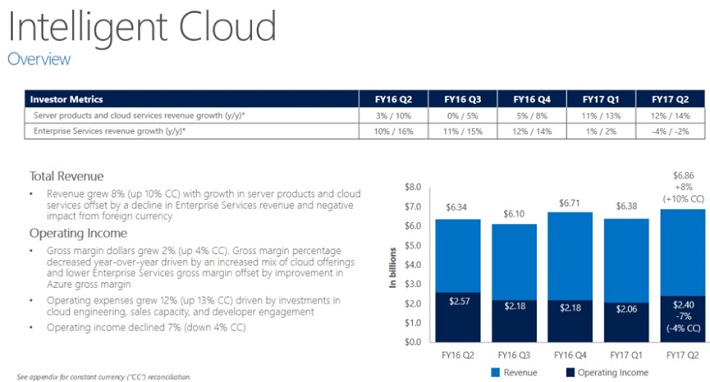 This segment posted 10% revenue growth in constant currencies last quarter, driven by increased demand for cloud services and servers. Additionally, its core Office products have transitioned well to the cloud, which is a major growth trend in personal computing. 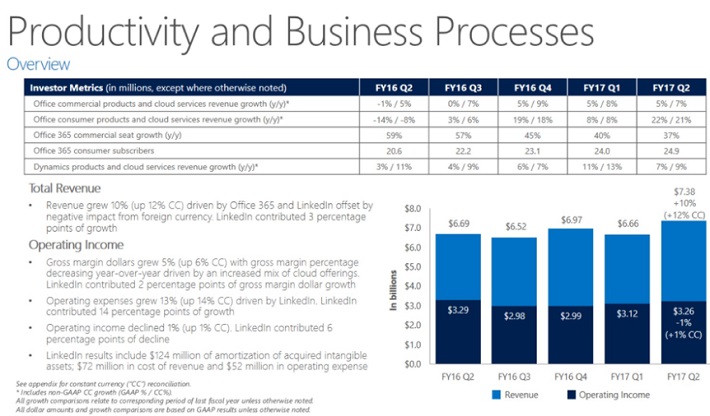 Revenue from Microsoft’s cloud-based products, Office 365 and Azure, rose 47% and 93% last quarter, respectively. By contrast, Facebook is used more as a matter of choice, rather than necessity. This gives Microsoft a competitive advantage, that Facebook may not have- the ability to withstand the test of time.

Reason #2: The Test of Time

Social media has proven to be a volatile arena so far. Over the years, many social media platforms have come and gone. Before Facebook, there was MySpace, Friendster, and many others. These platforms rose to prominence, then eventually faded.

That’s because these sites became popular with one age group, but the appeal did not transcend generations. When it comes to social media, what remains popular with one generation to the next is difficult to foresee. Facebook is all the rage today, but how long that lasts, is anyone’s guess.  It’s difficult to say if Facebook will stand the test of time– there’s not enough data.

By contrast, Microsoft’s software will likely be used by many generations to come. As long as people need to produce documents, spreadsheets, and use the Internet, they will need Office and Windows.

To be sure, Facebook has been tremendously successful. In 2016, Facebook’s revenue and diluted earnings-per-share soared 57% and 171%, respectively. Facebook’s massive success is because of huge growth in advertising revenue. The social media giant has racked up huge growth in monthly active users over the past several years, which has driven higher advertising revenue. 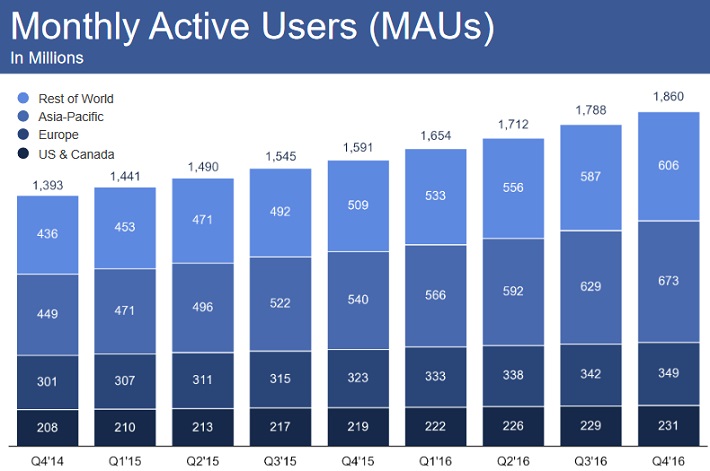 As Facebook grew, it also expanded its ability to monetize users’ data. When a person signs up for Facebook, they give it access to lots of data that is extremely valuable to advertisers. However, with nearly 2 billion, or almost 25% of the global population already on Facebook, its monthly active user growth could slow down.

Take the U.S. and Canada for example. Facebook has 231 million users in these two countries. Combined, the U.S. and Canada have a population of about 354 million. That means nearly two-thirds of the total population in these two countries is already a Facebook active user. Facebook’s revenue has exploded over the past several years, from rising active users. 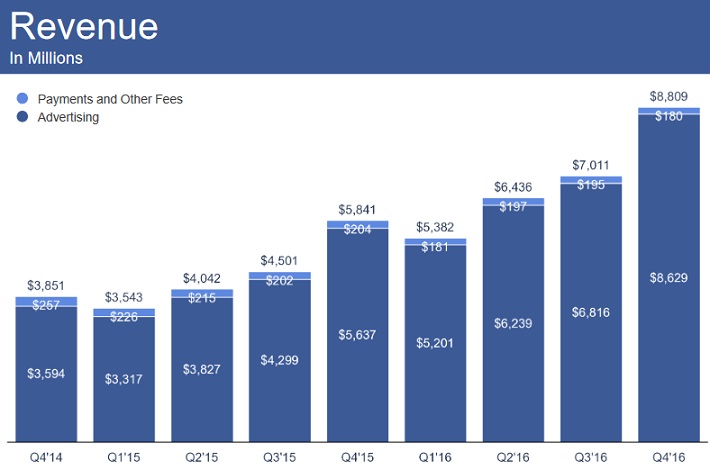 But sooner or later, user growth could plateau. Should Facebook ever lose its ‘cool’ factor, the giant could be in trouble. If history is any guide, what is perceived ‘cool’ by one generation is often not seen as favorably by the next. Plus, there always remains the threat of another social media site popping up and becoming the new Facebook, of its own generation.

For investors looking for sustainable business models that are sure to be around for the long-term, there is greater uncertainty surrounding Facebook than Microsoft.

Microsoft pays an annualized dividend of $1.56 per share. Based on its current share price, this represents a 2.4% dividend yield. Microsoft can easily afford to raise its dividend each year. Last year, the company increased its dividend by 8%.

Conversely, Facebook does not pay a dividend, and might never. It is still in the high-growth phase of its development, while Microsoft is a more mature business model. While Facebook is in growth mode, investors should not expect dividend payments. As a result, Facebook is a better candidate for growth stock investors.

Microsoft’s dividend makes a real difference to income investors. It has a yield that exceeds the 2% average dividend yield in the S&P 500 Index. Moreover, Microsoft has increased its dividend by 14% on average over the past five years. If it keeps up that pace, in 10 years Microsoft investors would generate a yield on cost of approximately 9%.

This means a $10,000 investment in Microsoft stock today could generate approximately $900 in annual income a decade from now- an example that does not include the benefits of dividend reinvestment. Putting the quarterly dividends back into Microsoft stock would generate an even higher yield on cost in 10 years.

Both Microsoft and Facebook are in sound financial position. They each have lots of cash, although Microsoft has a slight edge.

Facebook has approximately $29.5 billion of cash and marketable securities on its balance sheet. This comes out to approximately $10 per share, or roughly 7.4% of the company’s current share price.

Meanwhile, Microsoft held $123 billion in cash and marketable securities at the end of last quarter, or $15.63 per share. This represents 24% of its share price. As a result, Microsoft has much more cash on a per-share basis than Facebook. This could help provide a margin of safety.

Microsoft’s excellent balance sheet provides it with a ‘AAA’ credit rating from Standard & Poor’s. It is one of just two U.S. companies that has earned S&P’s highest rating. Healthcare giant Johnson & Johnson (NYSE:JNJ) is the other ‘AAA’-rated company. In the eyes of S&P credit ratings, Microsoft (along with J&J) have a better credit rating than the U.S. government, which was downgraded in 2011.

While Facebook and Microsoft both revolutionized the technology industry, they are vastly different stocks. Facebook is growing at high rates. But the stock carries a rich valuation, and pays no dividends. It is more appropriate for growth investors, particularly those with a high level of risk tolerance.

Investors looking for stronger defensive qualities, and dividends, should choose Microsoft instead.