EconMatters- May 12, 2015, 10:25 AM EDT
SHARE ON:
When Monday’s Eurogroup meeting concluded without an agreement between Greece and its creditors, it should have been game over for Athens. With pensioners at their breaking point and with local governments reluctant to comply with a decree mandating a sweep of excess cash reserves, the idea that Greece would somehow be able to scrape together €750 million euros to make a scheduled payment to the IMF today seemed far-fetched at best which is why we asked the following question Monday afternoon: 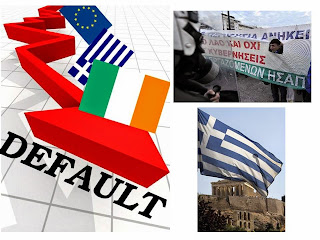 Where, if not from local governments who have been extremely reluctant to comply with Athens’ cash sweep decree, and if not from the IMF which will apparently not be paying itself tomorrow after all, is Greece going to get three quarters of a billion euros in the next 12 hours?
We now know the answer to that question. As Bloomberg reports, citing Kathimerini, Greece tapped IMF reserves to pay .. well, to pay the IMF:
Greece used up ~EU650m reserves from its SDR IMF holdings account to meet loan payment of ~EU750m due to Fund today, Kathimerini newspaper reports, without citing anyone.
Reserves kept in IMF holdings account need to be replenished within one month
IMF agreed over weekend for their use, given Greece’s liquidity situation; without use of those reserves, payment due today wouldn’t be possible.
Reuters has a bit more color:
Greece tapped emergency reserves in its holding account at the International Monetary Fund to make a crucial 750 million euro (539 million pounds) debt payment to the Fund on Monday, two government officials said on Tuesday.
With Athens close to running out of cash and a deal with its international creditors still elusive, there had been doubts whether the leftist-led government would pay the IMF or opt to save cash to pay salaries and pensions later this month.
Member countries of the IMF have two accounts at the fund – one where their annual quotas are deposited and a holding account which may be used for emergencies.
One official told Reuters that Athens used about 650 million euros from the holding account to make the payment.
“We made use of money in our holding account in the fund,” the official said, declining to be named. “The government also used about 100 million of its cash reserves.”
This explains why Yanis Varoufakis was so confident that the payment would be made and also why the language around the payment confirmation was so bizarre (recall that the heading was “Greece said to have given order for IMF repayment“). It also underscores the degree to which this entire ordeal has now careened into sheer absurdity because disbursing bailout funds that you know will immediately be sent right back where they came from in the form of an interest payment is one thing, but literally paying yourself is another, and the IMF seems to have done the latter on Monday.
Given this, it’s certainly not surprising that Christine Lagarde and company are not thrilled about the prospect of participating further in what has become an outright farce and as El Mundo reports, the fund has now told the ECB and the European Commission that it does not wish to be a part of a new program for Greece.
Via El Mundo (Google translated):
The International Monetary Fund (IMF) has shown the Eurogroup their desire not to be part of a possible third bailout of Greece, which would amount to 50,000 million and would be vital for the survival of the Hellenic country. The absence of really emotional action by the executive with whom Tsipras contain spending and tackle the deficit, as well as the challenges it has done in recent weeks, as the readmission of public employees has caused the agency wants let all the weight of aid to Greece in the hands of the Eurozone and the ECB.
The fact that the IMF wants to stop being part of the bailout of a country is particularly serious, not in vain this institution is always the last resort of economies whose situation is more complicated. Therefore, the IMF has priority over other creditors in the order for recovery and, in all history, only Zimbabwe, Somalia and Sudan have failed to fulfill their obligations to it. However, given the difficulties to unlock a new rescue aid tranche that matures on June 30, the Washington-based organization fears that Greece will become the first economy in a developed nation it incurs a default, as They have confirmed to THE WORLD sources familiar with the process.
For Germany (where lawmakers are already pressuring Angela Merkel to cut the Greeks loose) this may be the final straw.
Greece is now reliant on a similarly ridiculous circular funding scheme to pay public sector employees whereby pensioners will only receive payments if the government is successful at tapping pension funds for cash.
Via Bloomberg:
Greece may be able to meet end-May salaries and pensions payments, if pension funds, municipalities commit more of their cash reserves.
And because all of the above isn’t preposterous enough, Greece will depend on the disbursment of the €7.2 billion left in its current program (about half of which is set to come from the IMF) to replenish the funds it raided from its SDR holdings:
Greece assumes that an agreement will be reached by end-May for disbursement of bailout funds, so that it can replenish holdings account reserves.
In sum: the IMF paid itself on behalf of Greece and will now be forced to pay itself back for paying itself later this month. Or, put differently, Greece has prepaid the IMF with IMF money it doesnt have.
Meanwhile, Greek pensioners are set to adopt a similarly ridiculous self-payment scheme in a matter of weeks even if they don’t entirely appreciate the sheer insanity that’s taken hold in Athens.
And just to prove how dire the situation now is:
Research Report
analyst ratings
blogger opinions
investor sentiment
news sentiment
analyst ratings
insider activity
hedge funds
stats charts
You May Also Like