3 Stocks that Outperformed the Market by More than 40% During the Great Recession: CHD, FLO, WMT

From the beginning of October, 2007 through March, 2009 the S&P 500 (as measured by the ETF SPY) fell 46.5%. Seeing nearly 50% of the stock market’s value evaporate in under 2 years is difficult. Not all stocks suffered such a devastating decline…

3 ‘boring plain bread’ (in one case, literally bread) stocks actually managed to record positive returns in this period. These stocks all have long dividend histories at the time. Two of the three are consumer goods companies, while the other is a very well known discount retailer.

The three stocks outlined in this article have all historically made excellent hedges against recessions. Each will be examined to determine if it is worthy of an investment now, and if it still has the merits to stand up to another serious stock market downturn.

Church & Dwight Co., Inc. (NYSE:CHD) is nothing if not consistent. The company has increased earnings-per-share each year from 1999 through 2014. The company’s success formula is very simple: heavily advertise high quality brands and price them less than other branded competitors. Church & Dwight has 9 ‘power brands’ that drive performance: 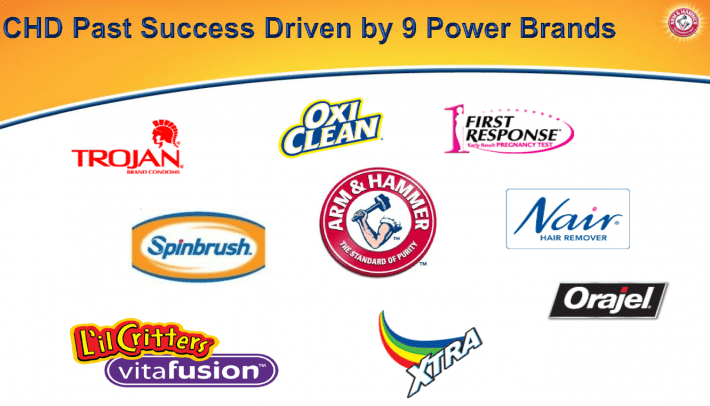 These 9 brands are responsible for 80% of Church & Dwight’s revenue. The power brands are all market leaders. Interestingly, 8 of 9 of the company’s power brands were acquired in the last 15 years rather than grown organically. The company’s oldest brand is Arm & Hammer. The well managed Arm & Hammer brand has allowed Church & Dwight to pay dividends for an amazing 114 consecutive years.

Going forward, the company plans to focus 75% of its advertising budget on the 4 brands it believes has the best potential: Arm & Hammer, OxiClean, Trojan, and Lil’Critters/VitaFusion. The move will create synergies in advertising as a dollar spent advertising the Arm & Hammer brand (or other ‘mega’ brands) benefits a large number of products that use the Arm & Hammer logo – everything from toothpaste to cat litter.

Church & Dwight performed exceptionally well during the Great Recession of 2007 to 2009. The company saw earnings-per-share grow each year through the Great Recession. The company’s success is due to its lower-pricing strategy. Arm & Hammer aims to price its branded products below competitor brand products to capture the value-oriented customers spending. This strategy works in prosperous times, but it works best during recessions. 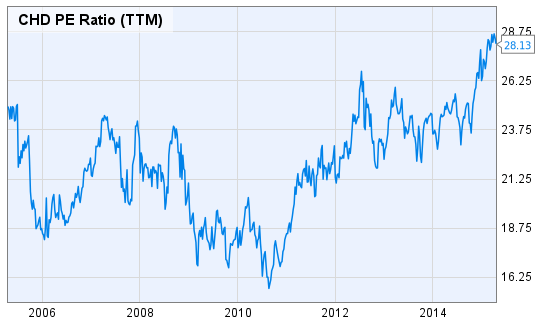 Flowers Foods, Inc. (NYSE:FLO) sells bread and other bakery goods. This ‘plain bread’ business managed to grow earnings-per-share each year from 2000 through 2010. The company has paid steady or increasing dividends since 1987. The company’s brands include Nature’s Own, Wonder Bread, Cobblestone, and Tastykake.

Flowers Foods growth has come largely through consolidating the bread industry in the U.S. The company’s market share of breads, buns, and rolls in the U.S. has grown from 7.7% in 2009 to 13.9% in 2014. In 2013, Flowers Foods made one if its largest acquisitions when it acquired Hostess’ bread bands and SaraLee California. 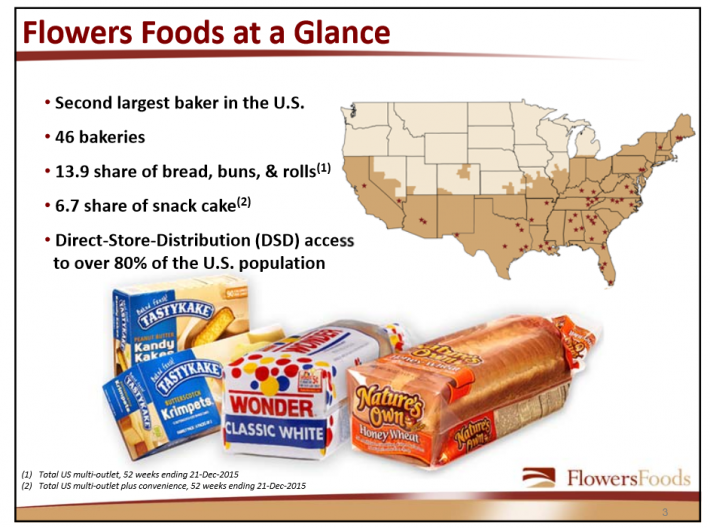 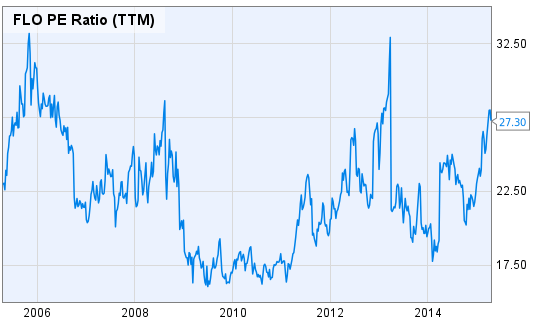 Investing in businesses trading near the high end of their historical valuations will likely provide less-than-satisfactory results going forward. Flowers Foods has a easy-to-understand growth plan and operates in a slow changing business that produces solid results regardless of the economic climate. Unfortunately, the company’s high price-to-earnings ratio makes now a poor time to enter into a position in the company.

Wal-Mart Stores, Inc. (NYSE:WMT) is a Dividend Aristocrat thanks to its 42 consecutive years of dividend increases. Wal-Mart is the largest discount retailer in the world. The company has reached a market cap of $250 billion and annual sales over $480 billion thanks to its dogged focus on low prices.

Wal-Mart is most popular with consumers on a budget. Americans spend about 18% of all food stamp dollars at Wal-Mart. When the economy falters and personal incomes fall, more people choose Wal-Mart due to its low prices. A struggling economy actually helps Wal-Mart. On the other side of the spectrum, declines in government welfare programs have a negative effect on Wal-Mart. Reductions in SNAP benefits in early 2014 hurt Wal-Mart’s earnings.

Over the last decade, Wal-Mart has grown earnings-per-share at 7.4% a year. The company currently has a 2.5% dividend yield. Wal-Mart also scores high marks for safety. The company’s beta is just 0.47; long-term stock price standard deviation is 19.1% – exceptionally low. Excellent quantitative risk measures are a result of the company’s reliable cash flows. The company’s solid historical growth and dividend yield combined with its low risk makes it a favorite of The 8 Rules of Dividend Investing.

Going forward, Wal-Mart plans to spur growth by investing heavily in digital sales. The company is experimenting with ordering online and picking up in store. Wal-Mart currently generates $12 billion a year in online sales – digital sales are growing it over 20% a year. In addition, the company is focusing on a ‘fill in the gaps’ strategy with smaller Neighborhood Market and Express stores in between its flagship Super Stores. Neighborhood market stores in particular are experiencing success, with comparable store sales up 7% in the latest quarter.

Unlike Church & Dwight and Flowers Foods, Wal-Mart has a reasonable price-to-earnings ratio of just 15.7. The company is priced well for investors looking to enter into a long-term position in Wal-Mart. The company’s fair price-to-earnings ratio combined with its low-risk business model and strong performance during recessions makes it an excellent choice in a diversified dividend growth portfolio.

Other Recession Resistant Stocks to Consider

In general, stocks that outperform the market during recessions have the following characteristics:

Seven other businesses that match these characteristics are listed below. These companies did not perform as well as the three businesses highlighted in this article over the Great Recession of 2007 to 2009. With that said, they will likely outperform the market during bear markets due to their low-risk business models, low betas, and reasonable valuations.