Shack Shake Inc (NYSE:SHAK) uses a metric it calls Same-Shack sales to describe its business at locations which have been open for at least 2 years. Most companies compare same store sales after only one year of operation, but Shake Shack says it sees so much initial demand when it opens a new location that it likes to wait an extra year for business to settle into normalcy before comparing results. Same-Shack sales improved dramatically rising from a 3.9% gain last quarter to an 11.7% advancement this period.

It’s reasonable to postulate that some of the Same-Shack boost may have come from the media attention that the IPO brought with it. Regardless, this was a big increase and an impressive achievement. Aside from the growth in Shack Shake’s early locations, new stores made a big impact too proving that the Shake Shack brand resonates globally. 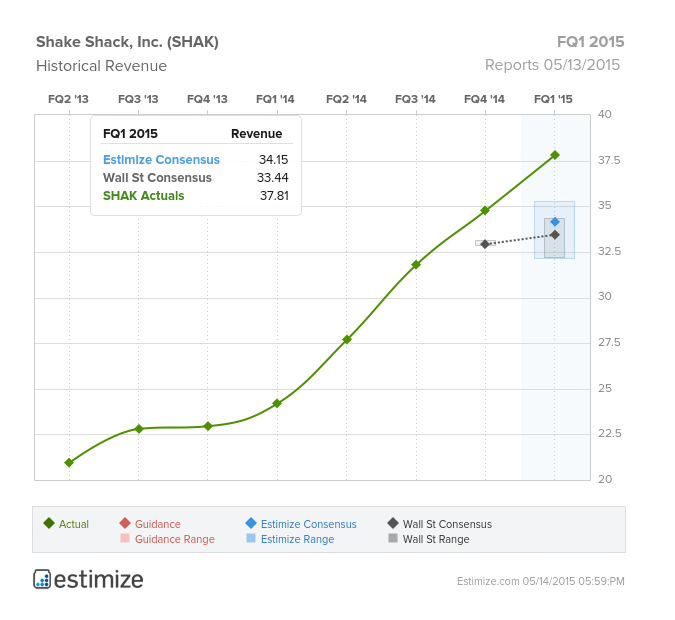 Shack Shake’s quarterly sales came in at $37.8 million. That beat the Estimize consensus of $34.2 million by 11% and topped Wall Street’s forecast of $33.4 million by 13%. This was a much better quarter than investors expected.

Year over year revenue was up 56%. Shake Shack has increased its revenue growth rate sequentially in each of the past 4 quarters. New locations are fueling the acceleration of the company’s growth.

3. Management is keeping its promises

From an operational standpoint Shake Shake has not only been impressive with Same-Shack sales, but they’ve also done a great job staying on track with their expansion plans. Shake Shack will need to continue opening new stores across the globe to grow into its hefty $2.6 billion valuation. So far Danny Meyer’s team is proving that they can keep their promises.

Shake Shack opened two new locations in Boston this quarter and one in Baltimore. Management reiterated their commitment to open at least 10 new stores in the US and 5 international licensed locations this year. With a young growth company like Shake Shack it’s important that the company proves it can keep on schedule to preserve its credibility. They did that this quarter.

Over the past 3 months Shake Shake combined excellent operational execution with meeting deadlines. It definitely helped further the bull thesis that Shake Shack can become a major player on the international stage.