Global Markets in 2016: Four risks to watch out for

After an eventful 2015, where we witnessed the first U.S rate hike in 9 years, crude oil dropping to 6 year lows, a dramatic selloff in Chinese equity markets and an unexpected abandonment of the Swiss FranEuro currency cap , we head into 2016 with global markets on tenterhooks. In this article, we analyse the 4 most important risks that global central banks will face while trying to bring their respective economies back on the growth track.

1. A Chinese economic slowdown, dragging Asian EM countries down with it

Earlier this year, S&P downgraded China’s growth forecast for 2016 to 6.3% from 6.6%, and for 2017 to 6.1% from 6.3%. While China has been attempting “flexible and forceful” monetary & fiscal stimulus measures to get its economy back on track, there has been no significant indication of GDP growth bottoming out so far.

Asian economies such as Thailand, Malaysia, Indonesia etc. are highly dependent on China for their exports and face continued slowdown risks as the famed Chinese juggernaut of an economy slows down. As China attempts to move from a manufacturing based to service-based economy, Australia faces further challenges during this transition in the form of lack of demand for its commodity exports.

“Nowhere do China’s economic shifts reverberate more than in the emerging world, as the EM and trade booms have relied heavily on Chinese demand,” said Chris Hall, Co-head of Asian Equity Research at BlackRock. 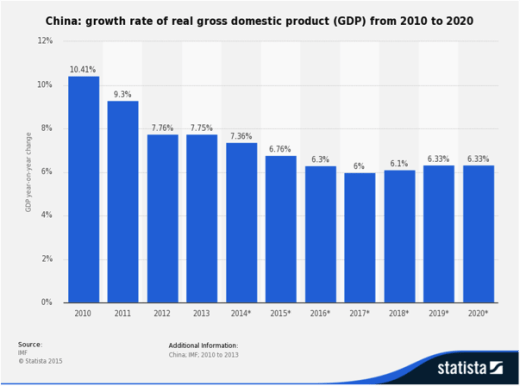 The impact of China’s slowdown globally can be judged by the importance assigned to it repeatedly by Federal Reserve Governor Yellen in her analysis of timing the first rate hike this year. The U.S, along with Asian emerging markets would hope that China’s pace of growth picks up in a sustainable manner in 2016, positively impacting their growth rates as well.

Market capitalization of global oil stocks has fallen by over $1.3 trillion, equivalent to the GDP of Mexico, since mid 2014. Credit defaults by energy firms have increased significantly and their ratings have been downgraded further increasing their borrowing costs. Oil prices had plunged from $115/barrel to $50/barrel in 2014 and commodity analysts largely expected a reversal in fortunes in 2015. 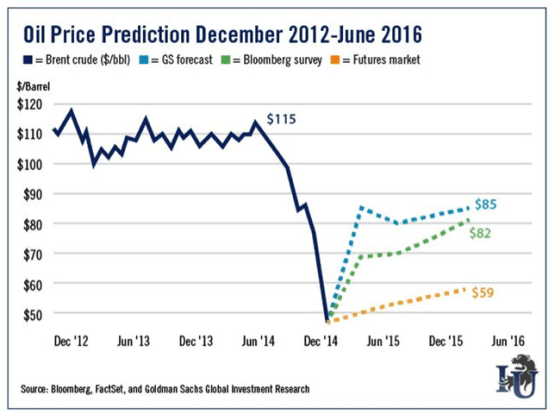 However, with the Middle east continuing to boost supply coupled with continuously falling global demand, oil prices dropped 26% in 2015. Iran and Libya will adding to the supply glut from next year after the international export ban was recently lifted and oil prices could see another poor year in 2016.

Countries such as Russia, Canada, Malaysia that are dependent on oil exports and others such as Australia which are overall major commodity exporters would face another poor year if this happens.

So far, the Middle East’s strategy of making US shale rigs shut down through artificially depressing crude oil prices is on track, as can be seen from the graphic below. 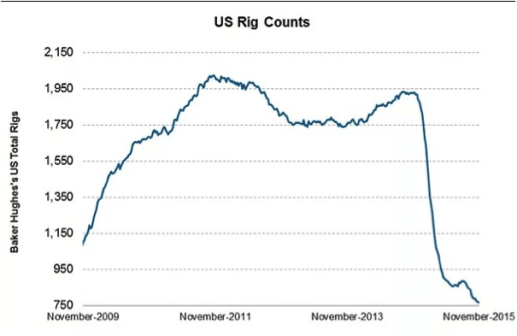 Expected to be one of the largest financial events of the year, the first Federal Reserve interest rate hike in 9 years was finally delivered in December 2015, though months later than was expected at the end of 2014. The dot plot released by the Fed forecasts 4 rate hikes of 25bps (100 bps = 1%) in 2016.

However, with the global economy continuing to underwhelm, any faster than expected hike could lead to market panic. Global equity indices as well as commodity prices along with emerging market currencies could suffer the most, similar to the reaction in Q2 2013 after the announcement of QE “tapering”.

Christine Lagarde, MD of the International Monetary Fund (IMF) warns of global growth being “disappointing and uneven” going into 2016, and laid the emphasis on central banks hiking rates to be as accommodative as possible for as long as possible. The IMF’s report predicts that failed normalization of interest rates would wipe 3% off the world’s economic output over the next 2 years.

4. Japan and Europe are unable to pull out of recession despite QE largesse

In April 2013 , the Bank of Japan (BOJ), under its Abenomics set of economic policies,  announced its own Quantitative Easing programme with bond purchases of ¥60-70 trillion a year, which was further expanded to ¥80 trillion in October 2014. However, the country is far from achieving its target of 2% inflation and might need to continue its loose monetary policy in some manner to revive growth.

The European Central Bank’s (ECB) €60bn a month asset purchase plan announced in January 2015 and the subsequent extension of the programme to March 2017 does not satisfy markets’ expectations for achieving ECB’s target of 2% inflation over the next 5-10 years, as can be seen in the graph below. 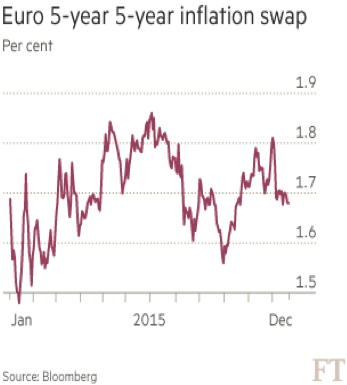 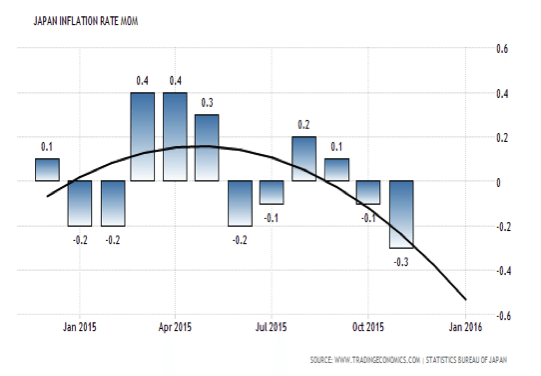 However, in recent announcements, both the BOJ and ECB have disappointed markets in terms of not increasing QE by as much as expected. This could lead to an appreciation in their currencies and subsequently a slowdown in growth. To pre-empt this shock, IMF’s Lagarde advises both central banks to continue their unprecedented QE policies, maintaining record low interest rates in their respective zones.

It remains to be seen whether the central banks choose to continue or even ramp up asset purchases to provide the support needed by Japan & Europe.