Oil is our most-precious commodity as fuel for the global economy. It is also becoming a scarce commodity, as global production has flattened, while global demand continues to climb relentlessly, everywhere in the world except for the dying economies of Europe and North America. It is a classic “seller’s market.”

Thanks to this reckless over-production; Canadian tar sands oil production has created three ultra-expensive/ultra-inefficient bottlenecks for itself:

Because of (a) and (b); Canada’s tar sands oil has been sold at “discounts” of up to $40/barrel. Because of (c) and other factors; production costs for tar sands oil (which was already the world’s most-expensive) continue to soar.

Legions of workers must be flown in, housed and fed, adding to costs. Competition for labour is so fierce that some companies now subsidize mortgage payments on $600,000 houses to entice workers to stick around.

In a recent study, CERI [Canadian Energy Research Institute] put the West Texas Intermediate (WTI) break-even price for a steam-driven oil sands project at $84.99 per barrel…For a new mine it is $105.54.

Thanks to the Harper Discount; tar sands oil is currently being ‘sold’ (i.e. given away) at a loss of nearly $50/barrel for existing producers (and much more for new producers). With total annual production of 750 million barrels; that’s an annual loss on tar sands oil production in excess of $30 billion.

With revenues now accounting for less than half of operating costs; any sane government would be looking to scale-back production (if not mothball it entirely), but not the Harper regime. According to the Financial Post:

A total of 14 new oil sands projects are scheduled to start next year [2015] with a combined capacity of 266,240 barrels a day, according to data published by Oilsands Review. That’s 36 per cent more than was started in 2014.

That amounts to an additional 97 million barrels per year, and at current prices, it would increase the annual losses on tar sands production by an additional $4+ billion/year. Fortunately, not all of these projects will ever see a start-up. As awareness of this catastrophic, financial boondoggle begin to set in; the oil-producers themselves are starting to bail-out.

The previous excerpt does more than illustrate the financial suicide of any new investment in tar sands oil; it demonstrates the lack of good faith of the Harper regime, notably Stephen Harper himself. As has been observed in previous commentaries; there is no possible way that this economic (and environmental) catastrophe could be merely an ‘accident’ of gross incompetence.

This was a deliberate betrayal by the Harper government (i.e. an act of economic treason). As already noted; the reason for the current, $30+ billion per year loss on tar sands production is directly attributable to three “bottlenecks”. But readers must keep in mind that any government would ask itself three questions before it started to rapidly ramp-up production of this ultra-dirty oil:

1) Where will the oil be refined?

3) Who will provide the labour to produce this oil? 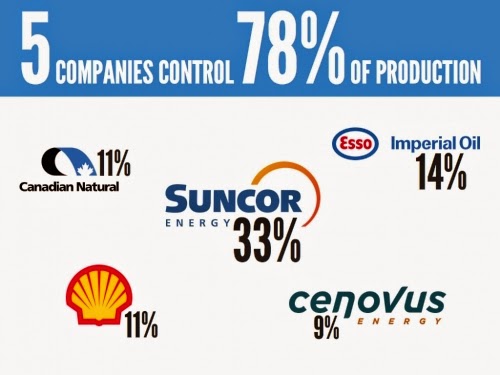 When an administration realized it didn’t have answers to any of those three questions; any legitimate government would place an immediate moratorium on further development, until it did have those answers. Even if we consider Harper to be so personally incompetent as to fail to ask himself those questions; he has advisors – lots of them.

It is not remotely plausible for Stephen Harper to pretend he was unaware that recklessly increasing tar sands output without any (viable) plan at all to eliminate those three, obvious bottlenecks would result in the Harper Discount: managing to lose catastrophic amounts of money selling a commodity in a seller’s market.

If we analyze Harper’s intent from the perspective of his actions, and the results of those actions; there is only one conclusion we can reach. Stephen Harper is endeavouring to (and succeeding):

But this still leaves one, remaining question: why has Stephen Harper chosen to engage in economic treason? The answer to that question is the same answer that applies to most of the motives for Harper’s actions: to serve his American master.

Where is almost all of “the lowest priced oil in the world” being ‘sold’ (i.e. given away)? The United States. Who is the beneficiary of the Harper Discount, and the $30+ billion per year loss for the Canadian economy? The United States.

However, there is still one remaining puzzle-piece to put in place; in order to put the Harper Discount (and Stephen Harper’s betrayal) into proper perspective. As U.S. energy consumption has dropped sharply; for what purpose is the U.S. using all of this heavily-discounted Canadian oil? Answer: to fuel the (energy-intensive) U.S. shale oil sector.

While Canada’s tar sands oil is now being produced at $85/barrel for existing producers (and $105/barrel for new producers), U.S. shale production which is at least as difficult and technologically challenging to extract is being produced for between $60 – $80 per barrel, according to the International Energy Agency.

So how/why can U.S. shale producers churn out their oil at a cost of roughly 25% less per barrel? The Harper Discount. With Stephen Harper giving away Canada’s oil at prices of up to $40/barrel less than any other producer in the world; the Harper Discount subsidizes the U.S. shale-oil industry by somewhere around $25 billion per year.

Without this enormous supply of ultra-cheap Canadian oil; arguably the U.S. shale-oil sector would have never been viable (even at previous prices) at production levels of more than a tiny fraction of current output. Presumably, Harper receives a “Christmas card” every year from U.S. shale-oil producers, and (of course) Barack Obama.

In encapsulating Harper’s betrayal of the people of Canada, it would be remiss to not include the specific environmental and economic devastation his reckless over-production of tar sands oil has had on the province of Alberta – the (former) home province of Harper, himself. Tar sands production rapes the environment of Alberta in numerous ways (not including the global damage from its massive emissions of “greenhouse gases”). But Harper is also responsible for an imminent economic catastrophe in tar sands communities, whose local economies have been insanely inflated by this reckless over-production.

From an article titled “Blood in the oil sands: Boom and bust in Alberta”, we see this grim economic picture emerging:

In Fort McMurray, the city of 76,000 at the centre of Canada’s biggest oil fields, housing sales are plunged 66% in February and are down 30% through the first two months of the year, the local real estate board reports. Only 48 houses sold last month and the rental vacancy has rate has spiked to 12%, the highest in Alberta…

The average composite home price in Fort McMurray remains near $597,600 – the highest in Alberta…

When Barack Obama proclaimed that the U.S. government was manipulating oil prices lower, as “part of its strategy” of economic terrorism against Russia, it was clear that he couldn’t care less what sort of “collateral damage” he caused for the economies of many of the U.S.’s oil-producing (supposed) allies – like Canada.

When Stephen Harper was given his orders to ramp-up tar sands production as fast as possible, and to give away that oil (to the U.S.) at the lowest, possible prices; it was clear he was also totally heedless of the collateral damage that action would cause. The difference is that all the harm from Stephen Harper’s economic betrayal has been (deliberately) inflicted upon his own people.