We’ve long framed collapsing crude prices as a battle between the Saudis and the Fed.

When Saudi Arabia killed the petrodollar late last year in a bid to bankrupt the US shale space and secure a bit of leverage over the Russians, the kingdom may or may not have fully understood the power of ZIRP and the implications that power had for struggling US producers. Thanks to the fact that ultra accommodative Fed policy has left capital markets wide open, the US shale space has managed to stay in business far longer than would otherwise have been possible in the face of slumping crude. That’s bad news for the Saudis who, after burning through tens of billions in FX reserves to help plug a yawning budget gap, have now resorted to tapping the very same accommodative debt markets that are keeping their competition in business as a fiscal deficit on the order of 20% of GDP looms large.

But even with a gaping hole in the budget and an expensive proxy war raging in Yemen, it’s not all bad news for Saudi Arabia as evidenced by King Salman’s lavish Mercedes procession upon arrival in DC last week and as evidenced by the fact that, as The Telegraph reports, non-cartel output is beginning to fold under the pressure of low prices. Here’s more:

Oil produced outside the Orgainsation of the Petroleum Exporting Countries (Opec) is slowing at its fastest rate in 20 years as lower prices hit higher cost producers such as the North Sea and US shale drillers, a leading energy think tank has warned.

The Paris-based International Energy Agency (IEA) has said that lower production in the US, Russia and the North Sea would result in output outside Opec dropping to 57.7m barrels per day (bpd) in 2016. The majority of the declines would come from US light crude, which is expected to decline by 400,000 bpd.

“The steep declines in US crude oil production seen since the end of June has created some optimism that we are now finally seeing that start of a steep decline,” said Bjarne Schieldrop, chief commodities analyst at SEB.

Oil prices have plunged 50pc this year with Brent crude trading well below $50 per barrel, a level which makes it uneconomical for many producers. Opec, under pressure from Saudi Arabia, has allowed oil prices to fall in an effort to protect its shrinking market share especially from the rise of shale oil drillers in the US.

So mission (partially) accomplished we suppose, and with banks set to reevaluate credit lines to US producers next month (i.e. the revolver raids are coming), it likely won’t be long before the competition starts to dry up. The only remaining question then, is how low will oil go in the near- and medium-term and on that point we go to Goldman for more:

Oil prices have declined sharply over the past month to our $45/bbl WTI Fall forecast. While this decline was precipitated by macro concerns, it was warranted in our view by weak fundamentals. In fact, the oil market is even more oversupplied than we had expected and we now forecast this surplus to persist in 2016 on further OPEC production growth, resilient non-OPEC supply and slowing demand growth, with risks skewed to even weaker demand given China’s slowdown and its negative EM feedback loop.

So a persistent global deflationary supply glut driven by lackluster demand. Nothing new there, and in fact, that exact confluence of factors was tipped to send oil to $25 in these very pages more than nine months ago. Now back to Goldman:

Got it. And just how low, in a worst case scenario, could crude go?

This creates the risk that a slowdown in US production takes place too late or not at all, forcing oil markets to balance elsewhere or as they have historically cleared, through a collapse to production costs once the surplus breaches logistical and storage capacity. Net, while we are increasingly convinced that the market needs to see lower oil prices for longer to achieve a production cut, the source of this production decline and its forcing mechanism is growing more uncertain,raising the possibility that we may ultimately clear at a sharply lower price with cash costs around $20/bbl Brent prices, on our estimates. While such a drop would prove transient and help to immediately rebalance the supply and demand for barrels, it would likely do little for the longer-term capital imbalance in the market with only lower prices for longer rebalancing the capital markets for energy.

So there you have it, a collapse to $20 Brent, but while the Saudis may have won the battle, the war is not yet over:

The levers to force HY producers into lower production, such as borrowing basis redeterminations, debt maturities and hedge coverage, are significantly less binding for IG E&Ps. It is instead management’s focus on balancing capex and cash flow and investors’ willingness to finance funding gaps that are the levers of adjustments for this cohort of companies. And while HY debt markets may be once again shutting, tentative signs of greater discipline by US IG E&Ps have so far only translated in stabilizing production guidance rather than pointing to the decline that our global oil balance requires.

As a result, the sharp intensification in producer financial stress observed recently – with forward oil prices and energy equity share prices at multi-year lows (and credit spreads at highs) – is unlikely to yield sufficient financial stress in the short-term. So while this deterioration in financial conditions is finally reflecting the markets’ decreasing confidence in a quick rebound in prices and a recognition that the rebalancing of supply and demand will likely prove to be far more difficult than previously expected, we now believe that such stress needs to remain in place well into 2016 and up until evidence emerges that US shale production growth is actually required. 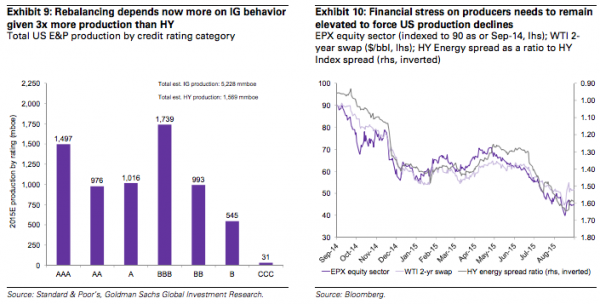 And speaking of war, the obvious risk to any forecast that calls for sharply lower crude is that some mid-air “accident” in Syria takes the “proxy” out of “proxy war”, in which case crude soars as Russia and Iran square off against a US coalition that would swiftly include Saudi Arabia in what would very likely be the precursor to a wider conflict the scope of which we haven’t seen since 1939.

Oh, and for all the muppets out there, Goldman has upgraded European oil producers:

Dividends may be cut, but with over coverage now yielding 6% on average this is becoming priced in. We expect returns and FCF to trough in 2016, and improve in 2017/18 driven by higher oil prices and falling costs. Even with this, valuations do not yet look compelling, but we move to a Neutral Coverage View from Cautious.