Wedbush analyst Liana Moussatos weighs in on Relypsa Inc (NASDAQ:RLYP), following the news that Switzerland’s Galenica Group has agreed to buy Relypsa for $32 a share in cash, or $1.53 billion overall, to gain rights to Relypsa’s drug Veltassa. Relypsa shares are currently trading at $31.83, up $11.73 or 58.36%.

Although the analyst sees $32 per share as an acceptable offer for shares of RLYP, she believes that there is room for at least one more bidder. According to the analyst, “On April 7th, a Reuters news article indicated that Relypsa received multiple overtures from potential buyers. With millions of CKD and heart failure patients experiencing hyperkalemia, we estimate the potential for peak annual sales to reach over $1 billion just in the U.S. and view the offer of $1.53 billion as approximately one-time peak sales.”

In addition to believing that room for multiple bidders exists, the analyst upholds that, with millions of potentially treatable hyperkalemia patients, more room for multiple treatments exists as well. The analyst currently views AstraZeneca’s ZS-9 drug as a potential commercial disappointment “due to likely increasing sodium-related toxicities such as edema and hypertension.” The analyst explains, “we anticipate potential suitors for Relypsa could also be interested in Ardelyx for RDX227675, a polymer-based treatment candidate for hyperkalemia, which exchanges potassium for calcium as does Relypsa’s Veltassa.”

The analyst reiterates her Outperform rating on RLYP with a $57.00 price target for RLYP, which she explains implies a $2.285 billion equity value.

TipRanks shows a consensus price target of $30.45 for RLYP, marking a 51.49% upside from current prices. Currently, 83% of analysts issue a Buy rating for RLYP, while 8.5% maintain a Hold rating, and another 8.5% uphold a Sell rating for the stock. 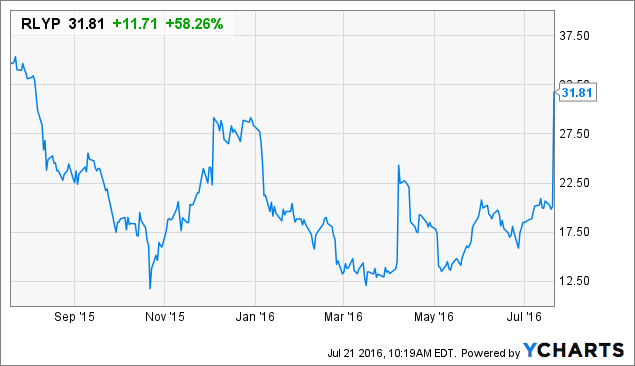