In a research report released today, William Blair analyst Y Katherine Xu maintained an Outperform rating on Oncogenex (NASDAQ:OGXI), but reduced her price target to $4.00 (from $8.00), which still represents a potential upside of 79% from where the stock is currently trading.

The report follows the news that Teva Pharmaceutical (NYSE:TEVA) and Oncogenex have terminated their agreement for the global development and commercialization of custirsen in the treatment of metastatic castration-resistant prostate cancer (mCRPC) as well as lung cancer.

Xu noted, “We lowered our price target based on several changes to our model . With a cash runway of only one year, the OncoGenex stock will be weighed down in 2015 with the strong financing overhang. However, considering our probability-adjusted valuation relative to where the stock is currently trading, and the AFFINITY data readout being just one year away, we maintain our Outperform rating believing that OncoGenex would be able to find ways to extend the cash runway during 2015; and should AFFINITY be successful, the company would be able to repartner custirsen for commercialization.”

The analyst added, “Our valuation does not include OncoGenex’s second asset apatorsen. We have removed projected milestone payments from Teva, as well as the former 50/50 profit sharing agreement, and reassigned 100% of both U.S. and EU revenue to OncoGenex. We also increased the company’s R&D expenditure as a result of assuming all responsibilities for custirsen development and related expenses. As such, our probability-adjusted NPV model now estimates peak worldwide sales of custirsen in mCRPC at $225 million, compared to $300 million previously.”

According to TipRanks.com, which measures analysts’ and bloggers’ success rate based on how their calls perform, analyst Y. Katherine Xu has a total average return of 7.8% and a 60.6% success rate. Xu has a -18.6% average return when recommending OGXI, and is ranked #967 out of 3426 analysts. 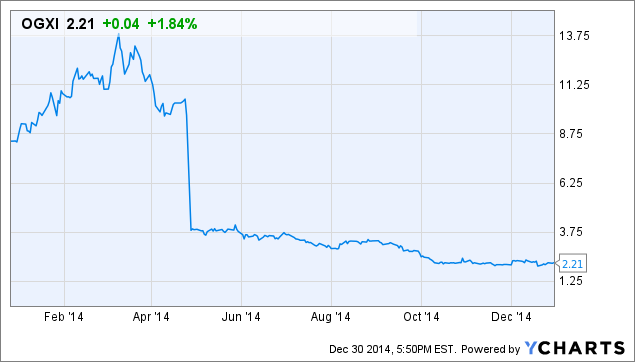