“Here, obviously AMD has the highest risk re-entering the high-tier GPU and n-node CPU markets within a 12-month period,” notes Ramsay. Yet, the analyst nonetheless maintains his confidence in AMD, explaining, “That said, our confidence in above-consensus results over the coming quarters continues to increase (particularly as the 7nm roadmap develops) and we anticipate a sharp inflection in margins and profitability for a very under-owned stock.” As such, the analyst reiterates a Buy rating on shares of AMD with a $20 price target, which represents a just under 41% increase from where the stock is currently trading.

Meanwhile, when turning to Nvidia, the analyst sees mostly smooth sailing ahead, save for question overhangs of stock valuation, asserting, “We see relatively few fundamental risks to NVIDIA, but valuation remains controversial.” In the backdrop of it all, Nvidia garners a mostly bullish perspective from Ramsay, who reiterates a Buy rating on NVDA with a $155 price target, which represents a close to 3% downside from current levels.

How does Intel measure up against its chip making opponents? According to Ramsay, this rivalry is not Intel’s to steal, and to put it bluntly, “Our HOLD rating on Intel shares is our answer here.” Reiterating a Hold rating on INTC with a price target of $38, which represents a 12% increase from where the shares last closed, the analyst sees Intel entering the fray at a sharp competitive edge when sizing up the company’s slice out of the server as well as PC pie of the market.

Even software tuning capabilities are robust, so what exactly is Intel’s challenge from Ramsay’s perspective? “In this battle, Intel comes from a dominant position of strength […] but with only share to lose.” While Intel did hook a meaningful lion’s share of growth back in its heyday between 2010 and 2015, the analyst could then see a comeback to DCG gains into the double-digit realm, offering shares a solid boost upward. The chances of this happening? “[…] unlikely,” determines Ramsay, shaking his head at Intel’s chances to rally.

In a question of whether AMD or Nvidia poses the bigger wolf risk to Intel shares, the analyst contends, “We believe Intel given AMD’s software compatible solutions in both the PC and server markets, a customer base hungry for near- and long-term competition, and a developing 7nm roadmap to give customers confidence.”

With regards to the gaming GPU “duopoly” the analyst predicts, he sees a balance with Nvidia taking 75% and AMD capturing 25%, which would translate the key crux of the battle to these final two of the three on the chip leaderboard for “share of the wallet” against Intel. 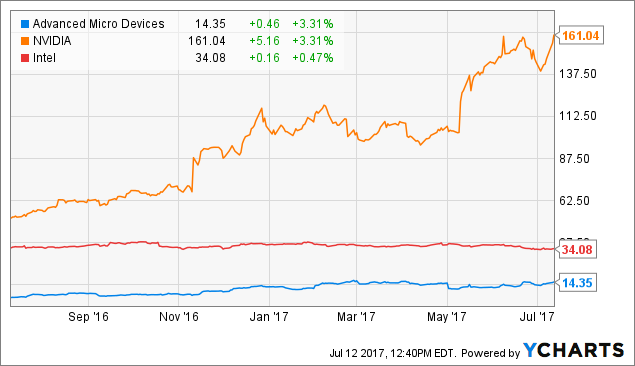