In a report issued August 5, Maxim Group analyst Jason Kolbert provided an optimistic view on Teva Pharmaceuticals (TEVA) following the release of the company’s second-quarter results, which included net revenues of $5.0 billion, and a quarter non-GAAP EPS of $0.87. The analyst reiterated shares at Buy with a $62 price target.

Kolbert wrote, “Copaxone had strong revenues of $939M, and Teva’s success in shifting patients to 3x weekly has been dramatic (now 17% of US patients). Teva generated $1.2B in cash flow in the quarter. Teva reviewed their bridging strategy from Q213 to Q214 with generic business rising $110M, speciality (excluding MS) up $107, and OTC and other up $35, offsetting lower MS revenues of $131”.

Furthermore the analyst said, “Teva is making progress on multiple fronts: 1. A strong patient-centric pipeline with NCEs and NTEs, such as Zecuity, ER Hydrocodone, abuse deterrent tablets (Amrix and Fentora) and Effentora and Actiq (patch). 2. A growing respiratory franchise (#5 worldwide) with Reslizumab, Spiromax inhaler, MicroDose nebulizer, and generic Advair. Projecting growth from $1B to $2.5B by 2019. 3. Build-through strategic M&A: Acquisitions should complement both the generics and specialty businesses”.

The analyst concluded that, even in a post-generic Copaxone world, Teva is now well positioned to rebuild the company with organic growth (brand, specialty, generics, and NTEs) supported by acquisition driven growth. 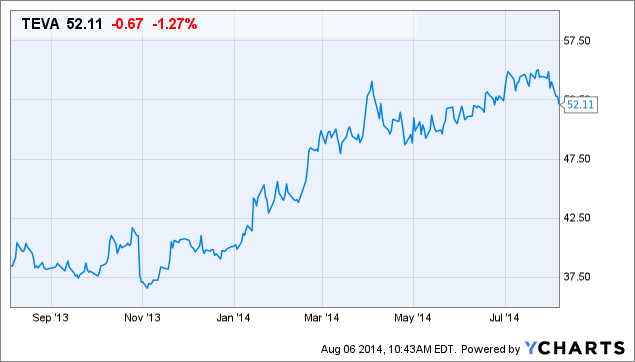