Twitter Inc (NYSE:TWTR) shares were surging ahead 11% yesterday after the company earned itself two new bulls yesterday. For a stock that has been in a turnover transition, the bullish attention is sitting well with the market.

J.P. Morgan analyst Doug Anmuth not only confidently steps away from the sidelines, but the analyst cheers that with expectations for a “return to revenue growth” in the new year, the social media platform has landed among “one of our top smid-cap ideas in 2018.”

Praising product enhancements and user gains momentum that will bring about “revenue inflection,” the analyst upgrades from a Neutral to an Overweight rating on TWTR stock while bumping up the price target from $20 to $27, which implies a 9% upside from where the shares last closed. (To watch Anmuth’s track record, click here)

Anmuth asserts, “We believe both the TWTR story & financial results will strengthen over the next year as the company continues to build on its differentiated value proposition for users & returns to revenue growth. Our upgrade is based on 4 key points: 1) TWTR products are improving led by video & live streaming content, changes across the timeline, notifications, & Explore tab, & a better UI; 2) We expect continued double-digit DAU growth of 10% in 2018; 3) We believe TWTR can grow ad revenue in 4Q17 excluding year-ago headwinds from TellApart/NFL/elections, and grow ad revenue 8.6% in 2018 on increasing demand; & 4) TWTR should be GAAP profitable in 2018, even after increasing investments, as it benefits from revenue-driven margin expansion.”

Though Twitters share “are not cheap,” the analyst bets that in lifted transaction in terms of users and advertisers alike, this “will drive upside to 2018 consensus” even as “investor sentiment around TWTR remains mixed.”

TipRanks indicates Wall Street is still hedging its bets on the social media platform, with an analyst consensus on the sidelines pointing to the bearish. Out of 25 analysts polled by TipRanks in the last 3 months, 3 are bullish on Twitter stock, a majority of 16 are sidelined, and 6 are bearish on the stock. With a loss potential of 21%, the stock’s consensus target price stands at $19.43. 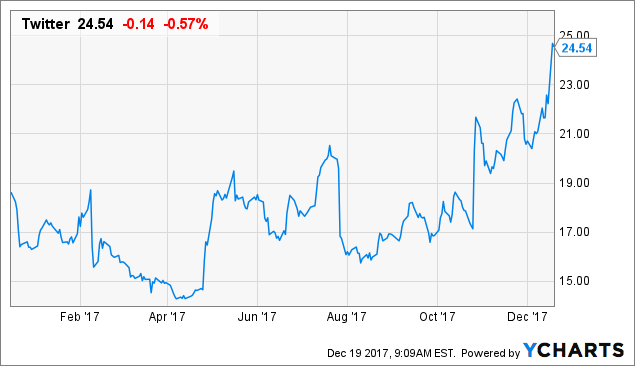